On This Day In Dino-history:The Martin and Sinatra Families December 19, 1967

Hey pallies, greetin's of the season on this 19th day of Dino-winter-month. Today we turn our Dino-attention to rememberin' that on this day in Dino-history, December 19, 1967, the Dino-show winter special featurin' the Martin clan and the frankie's gang aired on the Peacock network to the acclaimation and adulation of Dino-fans everywhere.

Still after 32 years, Dino-philes are ever clamorin' to get there hands on this Dino-magical Dino-event. Below is a formal picture of Dino's and the frankie's families united to share this rare Dino-occasion.

Searched all over youtube in hopes of findin' some Dinclips from that special to shares with you....nadda....so invites you to return to our amazin' pallie Ed's December 1st Ed's Epistle post to view our Dino and the frankie singin' 'bout a world filled with marshmallow.

Thanks to the pallies at the Guest of A Guest site for sharin' this pix of Dino-historical significance. To view the original post, as per Dino-usual, just clicks on the tagg of this Dino-gram. Dino-historically, DMP 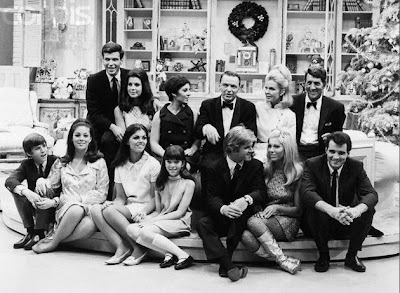 Wonderful portrait!, I love it.

Great post! I can try to look true my collection and see if i have any footage from that episode : )

Hope u both are having a great weekend!

Hey pallie, yeah, man, that Dino-portrait brin's back such wonderful memories of the days when Dino walked the earth....

Hey pallie, likes I does think that one of the Dino-best Dino-show DVDS has clips from our Dino's wintertime specials...you have a greats weekend in Dino yourself...