The Comedic Genius Of Martin And Lewis Episode 62: Holidays in Chicago

Hey pallies, likes can all you Dino-philes believe that we are already at day twenty-three of our Dino-winter-month gig? Not long now pallies 'til our Ed of Ed's Epistle fame turned up the heat at ilovedinomartin with what will be a totally wonderful piece of Dino-prose dedicated to celebratin' the life of our Dino as we remember his passin' from our view, now 14 years ago on December 25. Be sures to return on the morrow to catch our Ed's memorable memoriam of our main man!

On this 23rd day of Dino-winter-month we shares a real Dino-delight with all you pallies. Our pallie Noebie over at his Dino and the jer site, "The Comedic Genius Of Martin And Lewis," has posted a pod cast of our Dino and the kid's radio broadcast from Chicago that aired December 12, 1949 on the NBC network.

To listen in, just clicks on the tagg of this Dino-gram to goes to Noebie's blog. We thanks him for his pure and true Dino-devotion to sharin' these old radio broadcasts with us. Thanks to our Dino-girl Maria for the Dino and the kid seasonal pix that graces this post. Enjoys some Dino and the kid cheer pallies! Dinofunnin', DMP 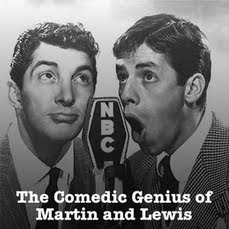 We're getting into the Holiday Spirit this time around on our Martin and Lewis Old Time Radio Podcast, with a December 12th, 1949 NBC Radio Network broadcast of The Martin and Lewis Show. Dean and Jerry are in Chicago for appearances at the Chez Paris.

Dino sings Jingle Bells and Don't Cry Joe, and we get to enjoy the comedy of Flo McMichaels and Sheldon Leonard as well.
Posted by dino martin peters at 5:47 AM

Thanks for post Mr. DMP, and of course Maria!

I hope you both have a great holiday season!

Hey pallie, you are most welcome....loves sharin' Dino-treasure with those who loves our Dino so very much....

Hey, DMP! I hope you're having a very Merry Christmas these days. Have fun and keep yourself warm 'cause it's really cold outside... Take care, pallie. Cheers!

Hey pallie, Kinezoe, great to hear from you my Dino-devoted pal durin' this Dino-season of sharin' carin'....be goods to yourself my man...