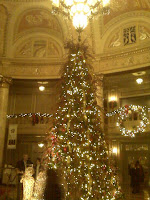 Imitation is the sincerest of flattery.

Oh, how the Grand Lady was lit up tonight! The Rialto Square Theater. The “Jewel Of Joliet” as proud as ever. Trees adorning the holiday festive glow of electric lights, men in long coats and ladies in their finest evening attire. The chilled night air captures the breath in smoke form, reminding pallies ti’s the season! Downtown Joliet, similar to downtowns across the country, struggles to keep up with father time. Stuck in the day of small shop window fronts and one way streets, Joliet has done it’s best to keep the charm of yesteryear while attracting the common folk spend an evening for some good ole-fashion live entertainment. Emerging from no specific street downtown, this pally is welcomed, like a beacon in the night, the glowing vertical “Rialto” glow. The night is on! Warm memories, a Cool Dino, and sizzling hot Golddiggers will soon be warming the hearts and souls of the Dino-philes tonight! 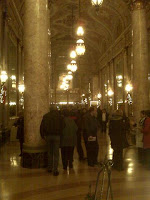 The lobby is one from movies and memories. Warm yellow glow further softening the delicate ornate architecture of this 1926 theater, once dubbed the best in the country. Ceilings higher than grandpa’s slacks, ole Dino could hit a 9-iron and not hit it.

The lobby fills up quickly from 7pm till show time. Line for the bar reaches all the way back to Steubenville Ohio it seems. Ah, but yours truly got his vodka and tonic first thing! The early bird gets the worm, sort to speak. I take in the crowdage. Dino fans all ages. Nice to see the youngin’s showing up at such an event on a Saturday night, a tribute that our Dino crosses ages and demographics. My guess-tamite of tonight’s attendance between 700 to 1000 folks. Dino is alive, and as popular as ever. Life is good.

Ladies and gentlemen, direct from the bar, Dean Martin!

Oh how many times this pally has heard those familiar words over the hiss of a CD, or during a fuzzy black and white DVD re-production of a Dino event. Always followed the roar of the crowd and the musical rendition of “Everybody Loves Somebody” blaring from the band stand. What will Dino do tonight? A fake trip? A slide of feet? What will the master entertainer of cool do to bring a smile to crowd, and to remind them that he’s the most laid back pally in the joint?

Dino saunters onto stage from far left. As the sun emerging from the clouds, the bright spotlight follows each smooth stride to center stage. Dino’s always good for a big “OH, OOH!” Couple pats of his tux collar, a tug at his bow-tie, and a pull at this sleeve, and like a magician, Dino is ready to perform his magic. 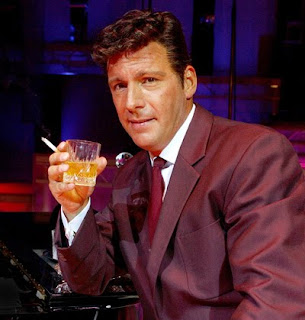 Hey pallie, man-o-man hows I wishes that I coulda have joined you for this once-in-a-life Dino-opportunity....so glad that such a lush performance will conducted in such a lush environment....thanks for settin' the stage for what was 'bout to come...will of course be stayin' tuned for more Ed's Epistle on your Dino-evenin'...

I hope that i will see him next year! Wow, you are so lucky Ed!