Torres installed a small bar next to the Riviera showroom called "Dino's Den."

Hey pallies, some cool Dinohistory shared here....from the Las Vegas Live Journal pad (clicks on tagg of this Dinopost to go there) comes some cool Dinotales from the life and times of Mr. Vic Vickrey. As you will read below, Mr. Vickrey "died last week at age 83 after an amazing life as a casino executive and host."

Knows you will enjoys this column by John L. Smith so much as he shares how Vic gots our Dino to play a high-roller host at a pad tagged Dino's Den at the Riviera and how one night at the Den our Dino made the frankie speechless.

This is such a stellar Dinofind of Dinofacts...just makes me loves our Dino even more and more....so loves readin' how our King of Cool puts the frankie in his place...and in the coolest Dinoway Dinopossible...truly only Dino matters. Dinodevotedly, DMP 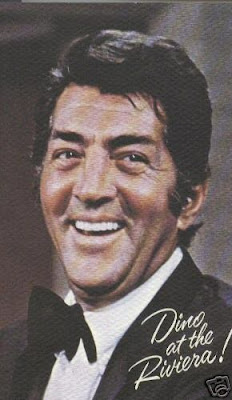 Vic Vickrey appreciated his place offstage in the Las Vegas casino pantheon, and he respected the entertainment legends he mixed with for six decades.

But between you and me, the night Vic helped shut up Frank Sinatra was one of his favorite stories.

Vickrey, the gambling racket's genuine Vegas Vic, died last week at age 83 after an amazing life as a casino executive and host. It would be much easier and consume far less newsprint to list the names of the casinos with which Vickrey wasn't associated during his phenomenal career.

Born in Mississippi, he spent his youth hustling in Texas roadhouse gambling halls.

"There were so many joints, I thought it was all legal," he once told me. "The sheriff came in and shot craps and played 21. He was the worst player I've ever seen, but of course I never told him that."

Once Vic was reminded of his employment's precarious legal position, in the early 1950s he joined the migration of the nation's card-and-dice mechanics on the road to Las Vegas. He walked into the Sahara and talked his way into a dice pit run by casino boss Sam Boyd.

"I said, 'I can deal these games as good if not better than any of these guys out there dealing now,'" Vickrey recalled. "He put me on a craps game, and I was wheeling and dealing and really knocking 'em dead. He came up to me later and said, 'Well, I'll say one thing. You sure are fast. You just broke every rule of procedure we've ever had.'

Vic kept the job, learned the rules and continued on a remarkable gambling odyssey.

His days of hustling dice in roadhouses were over, but that country boy's grin and boundless charm served him well all his days.

How nice a guy was Vic? He's the only man I've ever met who said nice things about casino owner Ed Torres, who had a nasty reputation and was as humorless as a hit man.

Vic, on the other hand, never went anywhere without his sense of humor. While at the Aladdin in the Torres-Wayne Newton era, Vic decided to have a little fun. He ordered the resort's marquee to read, "Starring Wayne Newton in the Bagdad Theater and Vic Vickrey in the Casino."

Mr. Torres was not amused.

But Vic's gregarious nature helped persuade Dean Martin to play the gracious high-roller host at the Riviera back when Torres was the owner of record and the entertainer had a small percentage of the place. In an effort to use Martin's mystique to attract and keep big spenders, Torres installed a small bar next to the Riviera showroom called "Dino's Den."

Martin dropped in for drinks and took time out to pose for photographs with high rollers personally delivered by Vickrey. Martin was gracious, the players were thrilled, and Vegas Vic made it all look spontaneous, right down to the casino camera girl who just happened to be nearby.

By the time the brief photo encounter was over, Vic had won a player for life, and the high roller had a million-dollar story to take home.

Unfortunately, someone forgot to inform Sinatra, who dropped by the bar one night to party with Martin in his out-of-the-way watering hole. The Rat Pack kings shared cocktails and laughs in the intimate setting.

Suddenly, on cue at a prearranged time, Vic brought in the high roller, who approached Martin as instructed with the casino camera girl in hot pursuit.

When the camera flashed, Sinatra exploded.

"Why don't you ask somebody before you take their picture?" Sinatra snarled. "What the hell's the matter with you? What right do you have to take my picture without asking somebody."

Vegas Vic did his best not to smile.

Martin stepped in as cool as you might imagine.

"Calm down, Frank," he said. "She wasn't taking your picture. She was taking one of my new friend and I. You weren't even supposed to be in it. Besides, my friend probably doesn't even know who you are."

With that, Francis Albert Sinatra, the Chairman of the Board, the man who always had something to say about everything, was speechless.

And Vegas Vic Vickrey, consummate casino host, was happy to play his part.

John L. Smith's column appears Sunday, Tuesday, Wednesday and Friday. E-mail him at Smith@reviewjournal.com or call (702) 383-0295. He also blogs at lvrj.com/blogs/smith.
Posted by dino martin peters at 7:19 AM

I think Dean was the only person who could talk to Frank that way and not get punched!

Hey pallie, likes thinkin' your are right on 'bout this....can't you just see how our Dino handled this with a great big Dinobuddagrin on his face and not a care in the world...such stories show us how perfect our Dino is in everyday way....knows that if only all pallies woulda follow our Dino we woulda then certainly have world peace...'cause truly only Dino matters....thanks for stoppin' by and sharin' your Dinothoughts....