On This Day In Dinohistory: September 17, 1950 our Dino and the kid debut on the Colgate Comedy Hour

Hey pallies, wow, is September packed with important Dinodates....thanks to our pallies at Hollywood Outbreak (clicks on tagg of this Dinopost to goes there) for remindin' all us Dinoholics that it was on September 17, 1950 that our Dino and the jer took on the Colgate Comedy Hour and the world of television was never ever the same again. The masses who had seen our great man and the kid in their stellar flicks was now able to catch their amazin' brand of humor on the small screen.

So, we celebrate this important day in Dinohistory that brought more fame and more fortune to our Dino. Dinoawed, DMP 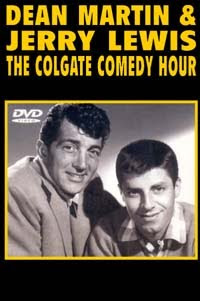 On this day in 1950, comedians Dean Martin and Jerry Lewis make their first appearance as hosts of a new TV variety show, The Colgate Comedy Hour.

Martin and Lewis first teamed up in 1946. Martin, born in Steubenville, Ohio, in 1917, had started a nightclub act after working as a prizefighter and a steelworker in the 1940s. Lewis, the son of performers, debuted in comedy acts with his parents at age five and was working steadily as a comic by 1946, when he met Martin. The pair performed an act in which screwball Lewis constantly interrupted straight man Martin’s singing. They made their first appearance at a club in Atlantic City and were an instant hit, soon in demand for radio and movie performances. They made their first movie together, My Friend Irma, in 1949. The following year, they were chosen, along with Eddie Cantor and Fred Allen, to share the host position for The Colgate Comedy Hour. The show ran until 1955, a year before Martin and Lewis split up.

After the duo parted ways, Martin launched his own TV variety show, which ran from 1965 to 1974. In the late 1950s and early 1960s, Martin teamed up with Frank Sinatra, Sammy Davis, Jr., Peter Lawford, and Joey Bishop to perform in Las Vegas. The group quickly became known as the Rat Pack, a suave group of young, fast-living entertainers. The group made several movies together in the early 1960s, including Ocean’s Eleven (1960), Sergeants Three (1962), and Robin and the Seven Hoods. Dean Martin died in 1995.

Jerry Lewis went on to sign one of the most lucrative film contracts of the day, a $10 million deal for 14 films with Paramount. Lewis’ films, including Cinderfella (1960) and The Nutty Professor (1963), failed to attract much praise from American critics but made him a star in France, where he has long been considered a comic genius. After a long absence from film, he gave an acclaimed performance in the 1986 film The King of Comedy, co-starring Robert De Niro.

Oh, i celebrated this day by listening to some Martin and Lewis radio pod casts on the buss, at school and through the hole day ;)

Hey pallie, how cool is that...sounds like you are continuin' your Dinohigher Dinoeducation...the most important education any Dinoholic can ever get....