Hey pallies, likes wow pallies, likes I never ever expected to learn details 'bout our Dino's co-star Beverly Adams who played Miss Lovey Kravezit in the first three Matt Helm capers. (Note that this article sez she was only in the first two.) But, here for our Dinoedification is a cool piece of prose on the life and times of Miss Adams.

Taken from the cool blog "Leo the Listmaker's Pop Culture Palace", where our host Leo diggs makin' lists (clicks on tagg of this Dinogram to goes there) comes this post on "The Top Stars of Tomorrow of 1966. Well pallies our Lovey happens to chime in at numero 8. Enjoys learnin' a few on MIss Beverly and a wee clip from her openin' sequence with our Dino in "The Silencers" where she and our great man towel off together....

Likes pallies, you just never know what new details 'bout our Dino and his ensemble that you are goin' to find. Cheers to our new pallie Leo for sharin' this with us.

And for you viewin' pleasure, our Dino and Miss Lovey in a very steamy situation from "The Ambushers"...... Dinodiggin', DMP 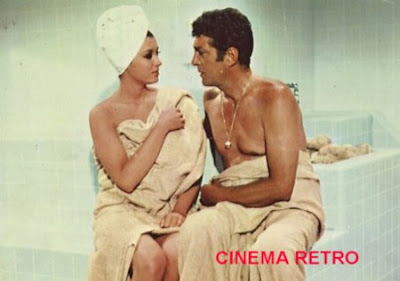 In 1941, the same group that produced the “top box office stars” list started polling with the question, “who are the individuals most likely to achieve major stardom?”. The results were generally an interesting mix of those who would become long term stars and those whose fame only lasted for a short time. These were the choices of 1966. 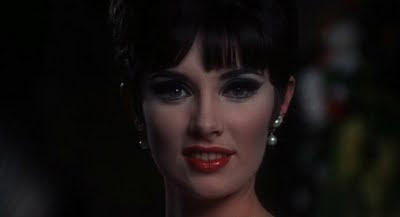 Beverly Adams’ first credit was an episode of “The Adventures of Ozzie and Harriet” in 1963. She continued to get small roles in movies and television, but made her first big splash in 1965 with her appearance in “How to Stuff a Wild Bikini” with Annette Funicello. She appeared in four films in 1966 including two films as Lovey Kravezit, Dean Martin’s secretary in the Matt Helm series. She also married famous hair stylist Vidal Sassoon in 1966 and soon retired from acting to raise her children.

Thanks for linking to my site, my friend. I'm also a big Dean Martin fan. Although my pick for coolest fella ever is Mr. Humphrey Bogart, Dino is definitely in my top five. I just wanted to clarify myself. I saw that Beverly was in more than two of the Matt Helm films, but when I said she was in two, I meant that she was in two in the year 1966. Thanks again and I'll be sure to add you to my list of links.

Hey pallie, man you are so welcome...and thanks for the explanation...am so thrilled to have some info on Miss Adams....cool that you diggs our Dino...we are gonna have to work on you dude to gets you to makes our Dino numero uno...'though Mr. Bogart has much cool....thanks for droppin' by the ol' Dinoblog...hopes to see you 'round here real Dinosoon...and thanks for
addin' the Dinoblog to your links...

Hey pallie. Thanks for sharing this with us. I've always wanted to know more about her. I really loved her in the Matt Helm flicks. I would love to have a personal assistant like her. What a babe. Dino always got the best looking girls. It was nice to learn more about Miss Adams. Take it easy. Cheers!

Hey pallie, likes was so glad that our Dino directed me to your blog this day so I could cast my vote for our Dino....no one else truly matters and so that you woulda dropps by and see this write up on Miss Beverly....keep in Dinotouch dude, you've been missin' lots of great Dinostuff here at ilovedinomartin....