Hey pallies, from the pad Austin360.com (clicks on tagg of this Dinogram to goes there) comes the news that this very Dinonight the Austin (TX) Film Society is sponsorin' a showin' of our Dino's randiest flick ever, "Kiss Me Stupid," on the bigg screen at the Alamo Drafthouse Cinema - South Lamar.

These pallies who belong to the Austin Film Society musta be a bunch of nouveau hipsters to be showin' our Dino in his most controversial movie ever. So wishes that I was in Austin tonight to see our Dino up there on the screen makin' likes his oh so cool, hip, and totally randy Dinoself in KMS.

Ain't it great pallies to see flick societies likes this one in Austin liftin' up the name of our Dino and bringin' more to know, love, and honor our Dino through their sponsorin' of such Dino-occasions. Dinodesirin', DMP 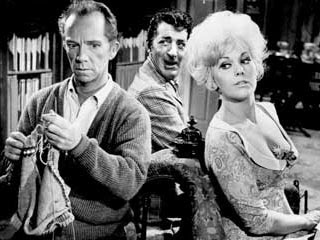 
Profile
From the promoter:
After fleeing Hitler's Germany and doing a bit of film work in France, Billy Wilder became famous in America for directing stylish films noir (DOUBLE INDEMNITY and SUNSET BLVD.), a trail blazing study of alcoholism (THE LOST WEEKEND), tough-minded war films (FIVE GRAVES TO CAIRO and STALAG 17), an expose of an unscrupulous journalist (ACE IN THE HOLE), and a devastating courtroom drama (WITNESS FOR THE PROSECUTION). But Wilder, along with co-writers Charles Brackett and I.A.L. Diamond, also wrote and directed some of America's finest film comedies over a four-decade period, during which time he was steadily able to cast off the flesh-biting shackles of Hollywood's onerous Production Code (a euphemism for censorship). In Wilder's hands, finding clever ways for characters to indicate what they wanted was far funnier than a full frontal attack. (Chale Nafus)

About KISS ME, STUPID
Dean Martin glides through his role as a smooth-talking, drunken, charming, womanizing club singer/movie star named Dino. On his way from Las Vegas to Hollywood, he has to take a detour which heads through Warm Springs to Paradise Valley with a final stop in Climax, Nevada, a sequence of geographical names which echo the hundreds of sexual innuendos bursting forth in this often hilarious and strangely overlooked comedy. Kim Novak plays a New Jersey hooker with a head cold and an almost forgotten dream of moving on beyond working at the Belly Button, where she has a professionally convenient trailer out back. It seems inevitable that Polly the Pistol and Dino will hook up, but that will require convoluted fumbling on the part of Orville J. Spooner, a piano teacher with fantasies of writing songs to be sung by the likes of the Rat Pack, his mechanic/gas jockey friend Barney, who can set one's teeth on edge with his rhyme-scratching lyrics, and Orville's lovely wife Zelda. Much of the comedy is driven by Orville's dreams of success countered by his maniacal jealousy. This is Boccaccio, Chaucer, French bedroom farce, and traveling salesmen jokes all rolled into one gigantic sexual concoction.
Posted by dino martin peters at 2:26 PM

Hey pallie, likes woulda loved so much to have been in the audience last night to see these hipsters diggin' our Dino at his coolest...and, likes yeah, how cool to travel the world as a Dinoambassador...liftin' up the name of our Dino whenever you go and bein' part of every sorta Dinoevent....

Thanks for linking up info on our screening of KISS ME, STUPID, a great comedy that was unjustly killed at the 1964 box office by religious censors and entertainment columnists who hadn't even seen the completed film. Our audience of 160 laughed all through the film and especially embraced Dino. You would have been proud. The MGM 35mm print looked and sounded great but unfortunately contained the more ambiguous version of Dino meets Polly/Zelda in the trailer. The DVD has both versions of that scene.
Regards,
Chale Nafus, Austin Film Society

Hey pallie, sir you are most welcome...it is a honor to share how the name of our Dino is bein' lifted up all over the universe...thanks so much for the report of how well received KMS was received in Austin last night...hopes you will be able to share more of our Dino's great flicks with your pallies who love fine cinema....how nice of you to dropp by this here Dinoblog and feel free to return often....