I think that what I like best about Bells Are Ringing (and remember, I like a lot of things about it) is that it has Dean Martin.

Hey pallies, here's a wonderful review of that wonderful Dinomusical "Bells Are Ringing." We salute Miss Amanda Cooper at her blogg "Noodle In A Haystack" for lifting up the name of our Dino in this way. She sez near the end of this Dinoprose....

"I think that what I like best about Bells Are Ringing (and remember, I like a lot of things about it) is that it has Dean Martin. I had never really paid much attention to him before I saw this movie, and I now regret it. I had seen him in a couple of movies before (westerns mostly) and not really cared. He seemed so sullen most of the time, and I didn't like him a whole lot. Don't worry, though, because I've seen my mistake. I know now how very cool he was, and yes, he was even cool when he was sullen."

Loves as the various Dinoways our Dino uses his charms to bring others to know, love and delight in our great man!!!!! To read this in it's original format, likes just clicks on the tagg of this Dinopost. Dinodelightedly, DMP

I don't think I'm alone when I say that I'm an admirer of Vincent Minelli's work. True, I have never consciously sought after his movies, but I have enjoyed the ones that I've seen. Just look at the quality of his movies: his direction skills are evident. The particular talents of each of the actors are used appropriately, and (allow me to be vague and general for just a moment) his films are always so colorful (I mean visually). Admittedly, I've never seen any of his black and white films (I'm assuming he did some... am I right?), but the colors in his... color films are always so bright and fun!


The point of the rather ignorant paragraph above is to lead into my review of Bells Are Ringing (1960). I promised this review to you, readers, some time ago, and now it's finally here! Yes, I can see, as you sit there frowning at me, that you're just as excited as I am. Am I right? No? Oh, well... that's too bad because I'm going to keep right on typing. 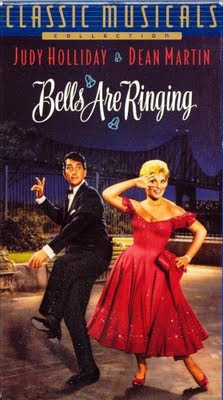 Ella Peterson (Judy Holliday) operates a switchboard at her cousin Sue's (Jean Stapleton) answering service, Susanswerphone. Now, am I crazy or is that a really cute and clever play on words? If you don't get it, just look at the name for a minute and you'll understand. Continuing with the plot: Ella has what I call a big heart, but she's a (let's be honest) utter menace on a date. Every time her cousin sets her up with a fellow, she gets nervous, shy, and clumsy. At one point, while bewailing this (terrible!) problem of Ella's, Sue cries that she's done everything but catch on fire! Little does she expect that Ella will do just that on her next date.


Ella doesn't mind that she has dating issues, though, because she's in love with Jeffrey Moss, one of Susanswerphone's clients. When talking to him, she uses a thin, wavering voice so that he thinks she is a kindly old woman. As a result, he calls her "Mom" and she becomes his confidant - over the phone, of course. It turns out that his writing partner split up the team, and now he is afraid that he won't be able to be successful without his partner. So instead of working and doing the best he can, Jeff goes out on the town drinking and flirting when he should be home with his typewriter. Ella, naturally, tries from her location at the other end of the phone line, to be a good influence on him.


Enter Inspector Barnes, who believes that Susanswerphone is a cover for a "lonely heart's club." Ella, who is furious, manages to temporarily convince him that he is wrong, but he does leave with a warning: if he gets wind of Ella, or any of the other operators, meeting with the clients or being anything but professional while on the telephone, they will be sent straight to the women's penitentiary. This proves to be no easy task for Ella, who is used to helping Susanswerphone's subscribers (once, she indirectly caused the marriage of two clients who would never have met if it hadn't been for her). Unable to let the subscriber's lives (or careers, as the case may be) be ruined, she begins sneaking out to see them, give them a little life-changing advice (anonymously, of course), and then disappear again.


During one of her escapades, she finally meets Jeff. Not wanting him to know who she really is, she gives him a fake name: Melisande Scott. During the course of a day which they spend together, Ella manages get him to start writing his play, as well as make him fall in love with her: something she hadn't intended to do. You may be thinking, "Yay! They're in love, and now everything is going to be okay!" This isn't necessarily correct. Everything is going to be okay (it's an Arthur Freed musical, after all!), but until then, Ella is upset because she thinks that Jeff is in love with her, Melisande, and not her, Ella. Anyone who really thought it out would see that's she's wrong, though. She was herself around him. So unless he only loves her for her name, he's in love with her, Ella. 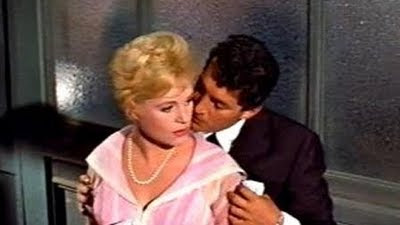 While all of this (with some musical numbers interspersed) is going, Ella is being tailed by Inspector Barnes' assistant, who has been taking pictures of her various meetings with the Susanswerphone clients. One of these pictures is of her kissing Jeffrey. Oops! Doesn't look good, does it?


There is also a side story that involves the record company which shares "office space" (the office is in Ella's living room) with Susanswerphone. It turns out that the record label is just a front for some bookies. Unknowingly, Ella manages to put a spoke in the wheels of what was considered to be an unbreakable code. This, naturally, doesn't sit well with the gamblers, who have lost a considerable deal of money due to her well-meaning actions.


For the most part, the story moves along at a pretty good place. However, there are a few scenes that I usually skip. These are scenes where the story takes a vacation and doesn't come back for about five minutes. Once it comes back, though, things are rosy again, and I'm happy to sit and watch Judy Holliday running around and helping people, or even practicing the cha-cha.


The music, with a few exceptions, isn't outstanding. When there is a good song, though, it really is good! Highlights: "Better Than A Dream" is sung by Ella and Jeffrey as a duet just minutes after they meet; Jeffrey sings "Just In Time" (one of my favorite songs, by the way) to Ella, and "The Party's Over" is Ella's lament after she has said goodbye to Jeff for the last time (or so she thinks). Thinking about, again, I've just realized that almost all of the songs are great. These three are just the most memorable. So, please, just forget about the first sentence this paragraph. There are only a few that I don't really care for, such as "The Midas Touch," "Drop That Name," and "It's A Simple Little System."


I think that what I like best about Bells Are Ringing (and remember, I like a lot of things about it) is that it has Dean Martin. I had never really paid much attention to him before I saw this movie, and I now regret it. I had seen him in a couple of movies before (westerns mostly) and not really cared. He seemed so sullen most of the time, and I didn't like him a whole lot. Don't worry, though, because I've seen my mistake. I know now how very cool he was, and yes, he was even cool when he was sullen.


P.S. If you haven't voted on the poll yet, you should now because there are only a few hours left until it closes! - Amanda
Posted by Amanda Cooper at 3:16 PM
Labels: Arthur Freed, Dean Martin, Judy Holliday, Vincente Minelli
Posted by dino martin peters at 7:24 AM

Hey pallie, likes do y'have your own copy of Bells?

Nothing beats Dino singing "Just in Time." He recorded several versions of the song.

Hey pallie, likes you gots it....and what a great tune for our Dino...knows he came into my life...just in time and changed my lonely life that lovely day....and Miss Judy Holliday is just so much fun to watch in action as well...

No i don't have it : ( But i am trying to find a copy ;)
But at least i got my Carol Burnett Show DVD set, and Dean and Frank live DVD from 1987 yesterday! So i am a little happy :D