Why Dean Martin and not pop music and "normal" music ?

Hey pallies, our pallie Maria is likes turnin' of the heat at your blogg (clicks on tagg of this Dinogram to goes there)...I woulda say she is on Dinofire and has certainly caught Dinofever....I loves this particular Dinopost where she shares with her peers her answer "Why Dean Martin." Checks it out pallies, this Deanager speaks such Dinotruth...certainly she is goin' be one of the international pallies of our Dino who will fire the Dinorevolution to a Dinofrenzy. Way to go Maria.... Dinoregards, DMP

Why Dean Martin and not pop music and "normal" music ?

Well, lately a lot of people began to ask me why i love Dean Martin as much as i do.Well i will be more that glad to anwser them : )

Well, i think in the beginning i just wanted to be kind of different from every one else, but then after finding out more and more about Dean i just fell in love with both his musical style, his style, his personality and just Dean Martin. I know, i know everybody thinks it's weird that 17, almost 18 years old girl is head over heals in love with a old, dead guy. Well for the first of all, he is NOT some old, dead guy.. I think that he is, at least for me, perfect man without any flows. I personally think that he is everything a man should be. He is funny, cool, down to earth, has not just great looks but he is HOT!! He has a kind of personality and a way of living that i can only dream to have. He is a kind of person who just doesn't give a f**k. He lives the way he wants and never cares about troubles.
I first heard his song when i was 10 i think, and i just couldn't stop listening. Then i started to listen too Frank, Dean, Perry Como. After a while i discovered Frank's movies and Duke. Then came Rat Pack and then Martin and Lewis, Dean Martin Show/ Celebrity Roasts. And now i am 2000% addicted to Dean Martin. I listen to him when i am down, when i am happy, when i go out for a walk or run, i listen to him before i go too sleep. But off course it's not Dean Martin music/films 24/7, there is Frank Sinatra, Perry Como, Jerry Lee Lewis, Elvis and "normal" music. But whenever i am sad, angry or just in normal mood, Dean Martin is always my Top 25 songs on IPod.
So for you people who like to say that it's weird music, music for older people and that i was born in wrong century. Well this is what i would like to say: I am not like to be like every one else, i don't want too follow the same music taste or books or movies/tv. It's perfectly fine to be different and do other things. I bet that every one does totally other things at home, other music, other books and just other things. So don't judge people for being different, just because i am not afraid of that! Because nobody is 100% normal, or perfect. So you just think about that for a while.

And by the way, The King Of Rock and Roll, Elvis him self said that Dean Martin is and always would be the one and only The King Of Cool. 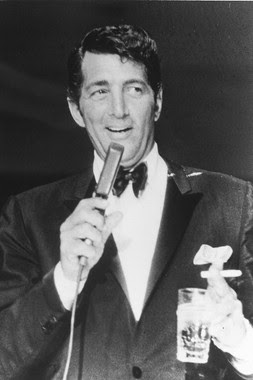