Classics from the vault: Vincente Minnelli's Some Came Running

Hey pallies, here's a heads up of a classic Dinoflick airin' a week from tomorrow night, Friday, August 28 at 8:00 pm ET on Turner Classic Movies. Thanks to Mr. Luke Baynes at the pad Examiner.com we have this little review of "Some Came Running."

If you goes to the site by clickin' on the tagg of this Dinogram you can then click on a link to see a clip of this stellar Dinomovie at TCM. Hopes all you pallies will takes the Dino-opportunity to catch our Dino on the small screen. Dinoreportin', DMP 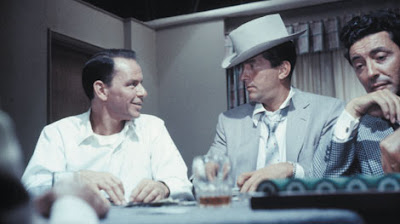 Ain't that a kick in the head: Frank Sinatra and Dean Martin in Some Came Running (MGM, 1958)

If there’s one role that defines Frank Sinatra the movie star and is closest to his off-screen persona, it’s Dave Hirsh in Some Came Running.

The film’s first shot finds him passed out on a bus in his Army uniform, bound for his hometown of Parkman, Indiana. The night before he’d gotten blind drunk during a poker game in Chicago, taken a poke at a guy, and had to be put on a bus to Parkman because it was the only place his buddies knew to send him.

Along for the ride is a dame called Ginnie (Shirley MacLaine), a floozy he picked up the night before but whom he now wants no part of. She asks if they’re going to meet his family. He rebuffs her after first asking the bus driver if he’d like to grab a beer. The driver intimates that he doesn't drink on the job and besides, there’s nothing open at that hour of the morning anyway.

This is the Sinatra of legend, the guy who’d do a gig at The Sands and then booze until dawn with his Rat Pack buddies. In many ways, Some Came Running is the ultimate Rat Pack movie, although it only stars Sinatra and Dean Martin. In one scene, they sit around playing cards in the back room of the local watering hole. "How about that?" Martin chuckles after Sinatra deals him a third deuce. “Ain’t that a kick in the head,” Sinatra shoots back, a phrase Sammy Cahn and Jimmy Van Heusen would turn into one of Dino’s biggest hits a couple years later.

As the solider returning home to postwar America, Sinatra’s character represents the effects the war had on the fabric of society, his presence changing everyone he comes in contact with.

Ginnie, in an attempt to improve herself, gets a job at the local brassiere factory, a symbol of the new breed of working woman who joined the workforce while the men were overseas and who remained independent in the postwar years.

Gwen French (the marvelously icy Martha Hyer) is the schoolteacher whose prudish veneer is broken down by the worldly Dave Hirsh. When she finally succumbs to his kiss, she lets her flowing blonde hair down, a moment that carries far more sexual electricity than if the Production Code had allowed her to fully disrobe.

And special mention must be made of the score of Elmer Bernstein, which moves from brassy jazz for the boozy barroom scenes set in the town’s underbelly, to romantic string-based pieces when Dave courts Gwen, effortlessly combining the two forms as the film careens to its tragic conclusion.


Some Came Running airs Friday, August 28 at 8:00 pm ET on Turner Classic Movies, part of a full day of films starring the Chairman of the Board.


Click here to view a clip from the film, courtesy of TCM.com
Posted by dino martin peters at 5:20 PM

Oh i love this movie, Dean gave really good perform ens and could act dramatically and funny as well.. Too bad i don't have a TV at home : (

Hey pallie, so this Dinoflick is not in your Dinocollection yet? If you don't have a tv at home how d'ya watch all your Dinotreasure of Dinodvds?

So every time I want to see Dino I just turn on my mac :)