Hey pallies, likes loves how 'lert the google pallies are to helpin' me find more cool bloggs where our Dino is bein' lifted up. Today's find is a great blogger blogg tagged Child Of The Sixties Forever And Ever where blogger John WIlliam Tuohy has shared several posts featurin' our Dino. The first one below (which you can see the original of if you clicks on the tagg of this Dinogram) features a great piece of Dinoprose on our Dino's boypallie Dino Jr. gig band Dino, Desi, and Billy with most of the accent of this fine trib on Dino Jr. Glads to see others showin' Dinoadmiration of our Dino's boypallie's very successful band. The next post as well will come from Mr. Tuomy's pad. Dinodelightedly, DMP 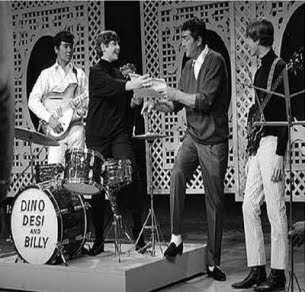 Dino, Desi & Billy was a 1960s singing group featuring "Dino" Martin (Dean Paul Martin, the son of traditional pop singer Dean Martin), Desi Arnaz, Jr. (Desiderio Arnaz IV, the son of television stars Desi Arnaz and Lucille Ball), and their friend Billy Hinsche. Hinsche went on to tour and record with the Beach Boys periodically throughout the '70s and beyond.

In 2002, Hinsche's website stated that Desi and Billy had formed a "new configuration of the original band" known as "Ricci, Desi, & Billy", performing original material and the original songs. Ricci Martin is the youngest son of singer Dean Martin

Dino Martin later began to go by his given name Dean Paul instead of the nickname "Dino". He became a successful tennis player (he competed in a junior competition at Wimbledon) and actor. He appeared in the 1979 film Players, for which he was nominated for a Golden Globe Award as Best New Star of the Year — Male, and later starred in the TV series Misfits of Science which aired during the 1985-1986 television season.

Martin was also an avid pilot. He obtained his pilot's license at age 16 and earned his wings with the California Air National Guard in 1981. Martin died in 1987 when his National Guard F-4 Phantom fighter jet crashed in California's San Bernardino Mountains during a snowstorm, killing him and his WSO (Weapons Systems Officer), Ramon Ortiz. The singer Dean Martin never recovered from the loss of his son, retiring from show business a few years later. Dean Paul Martin was married to and divorced from actress Olivia Hussey (mother of his son, Alexander) and Olympic skating gold medalist Dorothy Hamill.He is buried in the Los Angeles National Cemetery, a U.S. Department of Veterans Affairs cemetery in Los Angeles, California.
Posted by dino martin peters at 3:59 PM