Hey pallies, likes don't think I have ever Dinogrammed this cool Dinotale here at the ilovedinomartin Dinoblog before....it is by cool comedian and actor Denis Leary and how he was invited to spend an evenin' with our Dino. This was very late in our Dino's journey and shows that he was likes totally with it to the end. Enjoys this revealin' Dinoaccount all my Dinoholic dudes.... Dinosharin', DMP

My most mondo experience wasn't so much a year but the first four weeks
I spent in Hollywood, back in 1993. I was making Demolition Man in L.A.,
which was bizarre enough - I mean, me in a big budget movie with
Stallone and Snipes? It was also Sandra Bullock's first big flick.
My agent told me he got a call from Dean Martin. Apparently, Dean loved
my show No Cure for Cancer and wanted me to come over and have dinner with
him. 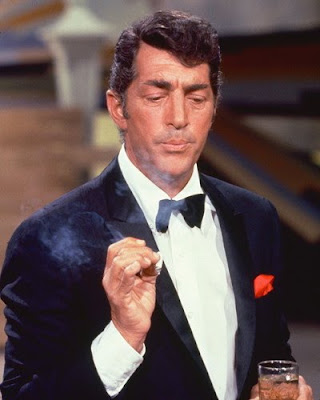 "You gotta be kidding me," I thought, figuring Martin was probably drunk
when he said it. So I drove over to his house in Beverly Hills. Sure enough, the door
popped open and there was Dean fucking Martin, wearing a Members Only jacket.
He looked magnificent: trim and tan with a big head of hair and the whole cigarette
thing going. It was kinda strange, because he looked just like my dad, who had passed away a long time before. He came over and gave me a hug -this was the first time I ever met the guy. 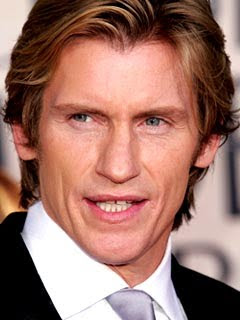 We had drinks, ate dinner, then had a few more drinks. For seven hours
straight. Dean was smoking cigarettes twice as fast as I was, and pounding 7&7's
like they were soda. One "7" was heavily favored over the "7," but he never slurred his words or looked unsteady. Meanwhile, I was drinking beer because I wanted to remember all the details. About halfway through the night, he
asked me to have a whiskey. When I told him I was okay, he said, "What are you, a
pussy?"

I couldn't believe it - I had just gotten called a pussy by Dean Martin!
That was, like, one of my lifetime goals realized.
Posted by dino martin peters at 7:04 AM

Oh he is so lucky :D I love the last part, where he says that being called pussy by Dean is his life goal :P

Hey pallie, thanks so much for lettin' us know what you think...yeah this Leary dude was so lucky to gets to spend time with our Dino...and yeah, I loves his endin' comment for Dinosure.....oh, how I woulda loved to have been Denis on that evenin' of Dinoevenin's....