Hey pallies, likes here is an update on the proposed new Matt Helm flick from the site Sci Fi Wire (just clicks on tagg of this Dinogram to goes there).

Mostly sharin' this 'cause you will not they have included this stellar pix of of our Dino in all his glory on the round bed with all those beautiful chicks....not in favor of redoin' of the Matt Helm series, but if they do it looks like they are goin' to do it totally differento then the perfect ways our Dino did MH.

So here is the latest and of course this marvelous pix of our Dino and company. Dinodiggin', DMP 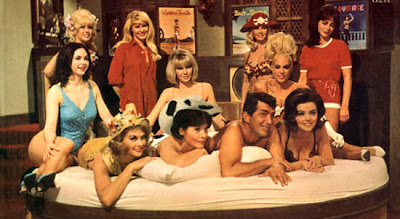 Steven Spielberg was circling a Matt Helm feature film, but he chose to direct Harvey as his next film instead; nevertheless, producer Roberto Orci said Spielberg is still creatively influential in the Helm project.

"He has still been very involved," Orci said in a group interview earlier this month in Pasadena, Calif., where he was promoting his Fox TV series Fringe. "He helped us develop it. It's something we all are still working on together, and he is no less excited about it."

Donald Hamilton's literary spy character made it to Hollywood in a series of films in the 1960s starring Dean Martin. A TV series in the '70s turned Helm into a private detective. Orci wants a new film to do Helm right.

"It was an old series of great books about kind of an American James Bond," Orci said. "Dean Martin played him, very much in a tongue-in-cheek kind of Austin Powers kind of way: automatic bed, would take his martini in the morning when he wakes up, kind of campy. The idea of updating it is for now and making it kind of a cool, sophisticated [story]. America's answer to James Bond is the way we're thinking of it."

But Jason Bourne seems to be America's answer to James Bond, and even the recent Bond films took a more gritty, realistic approach. Orci wants to create the American equivalent of the 20 more fantastical James Bond films that came before Daniel Craig.

"Yeah, just there hasn't really been an American James Bond that has that slight swingin' sensibility without it crossing over into parody," Orci said.

Helm is not out to any more directors yet, but development is progressing fast. "We're producing that with Jerry Weintraub, who's amazing, and Paul Attanasio writing," Orci said. "We'll see if that's one of the ones we can get up and running soon."
By Fred Topel
7:53 AM ON 08/18/09
Posted by dino martin peters at 4:18 PM