The Rat Pack was a group of popular entertainers........

Hey pallies, here's 'nother amazin' Dinopost from Mr.John WIlliam Tuohy's great blogg Child Of The Sixties Forever And Ever (clicks on tagg of this Dinogram to goes there). This time Tuohy's Dinofocus is on the Rat Pack which he does cool justice to with great history and some super pixs of our Dino and the pack.

Loves to see this kind of honorin' of the past and 'specially our Dino...amazin' to see others takin' the time to remember and honor our Dino and his pallies in such a insightful way. Enjoys this retellin' of the RP history and keeps lovin' our Dino! Dinoawed, DMP 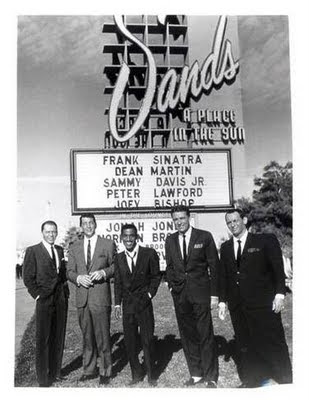 The Rat Pack was a group of popular entertainers originally centered on Humphrey Bogart. In the mid-1960s it was the name used by the press and the general public to refer to a group that called itself "the summit" or "the clan," featuring Frank Sinatra, Dean Martin, Sammy Davis, Jr., Peter Lawford and Joey Bishop, who appeared together on stage and in films in the early-1960s, including the movie Ocean's Eleven. Despite its reputation as a masculine group, the Rat Pack did have female participants, including movie icons Shirley MacLaine, Lauren Bacall, Angie Dickinson, Marilyn Monroe, and Judy Garland. 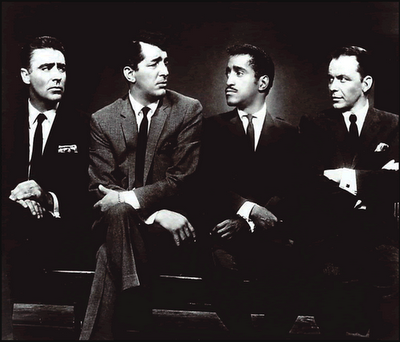 The name "Rat Pack" was first used to refer to a group of friends in Hollywood informally organized around Humphrey Bogart and including the young Frank Sinatra. Several explanations have been offered for the famous name over the years. 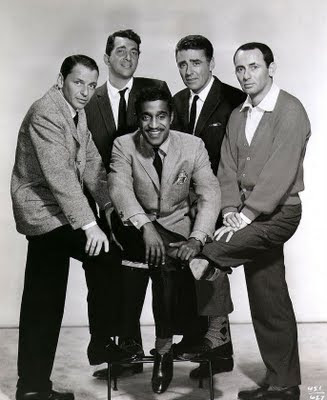 According to one version, the group's original "Den Mother," Lauren Bacall, after seeing her husband (Bogart) and his friends return from a night in Las Vegas, said words to the effect of "You look like a goddamn rat pack. "Rat Pack" may also be a shortened version of "Holmby Hills Rat Pack," a reference to the home of Humphrey Bogart and Lauren Bacall which served as a regular hangout. 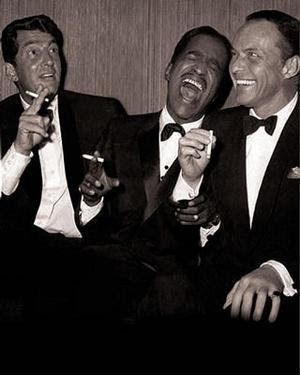 The name may also refer to the belief that an established pack of rats will belligerently reject an outsider who tries to join them ("Never rat on a rat"). Garland's daughter Lorna Luft tells the story that a certain gossip columnist (probably Hedda Hopper or Louella Parsons) wanted to be invited to the group's parties. The group didn't want their private parties becoming the subject of the writer's next column, and so the columnist was never invited. Later, she was said to have written about "that rat pack in Holmby Hills," which Garland found incredibly funny.

Garland later had stick pins made for the group in the shape of rats with rubies for eyes.[citation needed] Thus, the "Rat Pack" was born. So called "visiting members" included Errol Flynn, Nat King Cole, Mickey Rooney and Cesar Romero. 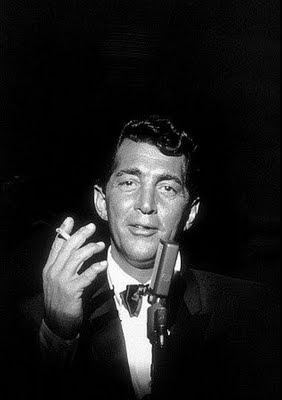 The 1960s version of the group included Frank Sinatra, Dean Martin, Sammy Davis, Jr., Joey Bishop, Peter Lawford, and for a brief stint, Norman Fell. Marilyn Monroe, Angie Dickinson, Juliet Prowse, and Shirley MacLaine were often referred to as the "Rat Pack Mascots", a title which reportedly made these ladies feel like "one of the boys".

The post-Bogart version of the group (Bogart died in 1957) was reportedly[citation needed] never called that name by any of its members — they called it the Summit or the Clan. "The Rat Pack" was a term used by journalists and outsiders, although it remains the lasting name for the group.

Lawford was a brother-in-law of John F. Kennedy, and the group played a role in campaigning for him and the Democrats. Sinatra expected that he would be part of Kennedy's inner circle after the election but was excluded due to JFK's concerns about Sinatra's perceived ties to the mafia. This in turn led to Peter Lawford's exclusion from the group after 1962.

Lawford's role in Robin and the Seven Hoods was given to Bing Crosby and beefed up with several songs added.(It wasn't the first time Sinatra had treated a Rat Packer that way; Davis's role in Never So Few was given to Steve McQueen when Sinatra and Davis had a temporary falling-out.)

The Rat Pack often performed in Las Vegas and were instrumental for its rise as a popular entertainment destination. They played an important role in the desegregation of Las Vegas hotels and casinos in the early 1960s.Sinatra and the others would refuse to play in or patronize those establishments that would not give full service to African American entertainers, including Davis. Once Rat Pack appearances became popular and the subject of media attention, the Las Vegas properties were forced to abandon segregation-based policies

Sinatra and friends had no idea this band of five would make entertainment history. The group was remarkable for its upbeat entertainment style and smooth musical and comedy routines, many of which were ad-libbed. Davis said when Sinatra called the initial gathering of the Rat Pack, U.S. President Dwight D. Eisenhower, French President Charles de Gaulle, and Soviet leader Nikita Khrushchev were planning a Paris Summit Conference. Not to be outdone, Sinatra observed, "We'll have our own little Summit meeting." The Vegas Summit did not draw diplomats, but it did draw high rollers, VIPs, celebrities, and entertainment buffs, who responded by the thousands.

Often, when one of the members was scheduled to give a performance, the rest of the Pack would show up for an impromptu show, causing much excitement among audiences, resulting in return visits. They sold out almost all of their appearances, and people would come pouring into Las Vegas, sometimes sleeping in cars and hotel lobbies when they could not find rooms, just to be part of the Rat Pack entertainment experience. The marquees of the hotels at which they were performing as individuals would read, for example, "DEAN MARTIN - MAYBE FRANK - MAYBE SAMMY" as seen on a Sands Hotel sign

On June 20, 1965 Sinatra, Martin and Davis with Johnny Carson as the emcee (subbing for Bishop who was out with a bad back) performed their only televised concert together during the heyday of the pack at the Kiel Opera House in St. Louis, a closed-circuit broadcast done as a fundraiser for Dismas House (the first halfway house for ex-convicts). After being thought lost for thirty years Paul Brownstein tracked down a print of the show that had been sitting in a closet in St. Louis. It has since been broadcast on Nick at Night (in 1998) as part The Museum of Television & Radio Showcase series [2] and released on DVD as part of the Ultimate Rat Pack Collection: Live & Swingin. 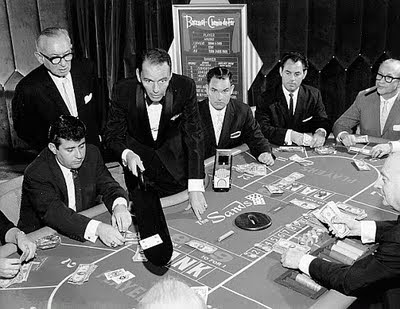