Hey pallies, a cool dude tagged Scotty over at his blogg pad "Culture Vulture Time" (clicks on tagg of this Dinogram to goes there) has posted a stellar essay 'bout the 'Vegas that was. Loves what he says 'bout our Dino....".....or even the breezy path to hot desert/air conditioned unblinking showbiz bliss briefly exemplified by zen master Dino Martin."

Never were truer Dinowords spoken 'bout our great man. Reminds me of ow our Dino's stellar biographer Nick Tosches spoke of our Dino as "an American Buddha." So enjoy Scotty's ruminations on how it was in the Rat Pack days of 'Vegas. Dinodeliglhtedly, DMP 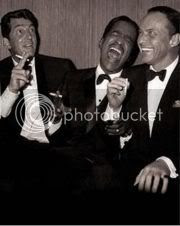 I grew up thoroughly intrigued by Las Vegas, a place I only knew through the movies and television, a place that I saw as filtered through the cool daddy shades of The Rat Pack, a locale I viewed as an opposing camp to the rock and roll army I imagined I was attached to, a weird American kind of Oz, bursting with kitsch, camp, and middle-class Americana yet also built upon the shattered bones and long dried blood sprinkled in the desert by dying breed of raffish, brutal, and ruthlessly ambitious criminal warlords.

I never saw that Las Vegas, whether it existed or not. The Vegas I know, the Vegas I’ve landed in quite a few times in recent years because of my job, doesn’t sport the mystery or the allure of the one I imagined during my dreamy adolescence, nor does it pop and crackle with coolness or retro hipness. It’s a working town, peopled with hardworking service people, cocky Euro-kids, sideways glancing businessmen, moneyed Asians, burgeoning young Republican party boys, red-faced Canucks, the-big-one-is-coming seniors, and apple-pied Americans, all hell-bent on sniffing the plasticized aroma of the continual canned spectacles plodding on all around with clockwork predictability while catching an OSHA-prescribed, seat-belted, tickety-tack theme park ride vibe that’s easily safer than milk. Sure, if you work the outskirts hard enough, roam the floors late enough, and poke your nose into the joints with the dimmer lights you’ll spot the hustlers, the hookers, and the hard cases, each of ‘em working the same slow capitulation scheme that their cousins and ex-next door neighbors are doing in whatever passes for a big city in yer own neck of the woods, none of them any brighter, better looking, or more hard core.

Each time I visit this mythological place, propelled by new vigor and backed up by my past archaeological digs, I’m convinced that there’s gotta be a piece of that old black magic desert paradise still in existence, maybe even a few hot spots that transmit the sweet sweat of Sammy Davis, Jr, the cocksure propensity for transcendent drinking once and forever carved out by Frank Sinatra, or even the breezy path to hot desert/air conditioned unblinking showbiz bliss briefly exemplified by zen master Dino Martin. Maybe Fat Elvis screwed the joint up, leaving behind a rust pile of broken spangles and the stench of discarded pill-poisoned scarves, opening up the stage doors to a parade of pot-bellied crooners, light shows with songs, well-coiffed Grade B television spawned vaudevillians, manikin-like divas, and audiences that would rather cheer themselves shuffling off to Buffalo.

Al Jolson’s ghost couldn’t stomach a stopover in today’s Las Vegas, but I am still made of mortal coil, and I am Sam Spade-determined to solve this ongoing Las Vegas caper, my friends. Let me turn off the keyboard and slide into the elevator rolling down into the lookalike play pen they call my hotel. I’m on this case for free, you see, and I have to pursue the elusive great whatzit before it wiggles into my gut and corrupts my soul. Viva la that.
Posted by Scotty D at 7:19 PM
Posted by dino martin peters at 6:34 PM