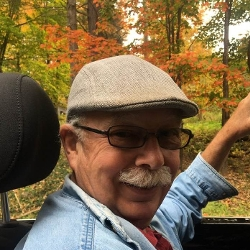 Hey pallies, likes we largely largely loves to share delightfully deep devotion to our Dino from a vibrant variety of online sources and truly truly our Dino-cup continues to fabulously flow as we continuously lift up the name of our Dino in the ol' google search engine.  Today's result comes to us    from the marvelous musical blog a la Canada, "Vibrations.ca" where way back in the  year of our Dino 2009 supreme scriber Mr. Lorne VanSinclair(pictured on the left), the awesome administrator of this way swank site, posted his Dino-reflection simply tagged "Dean Martin.
Our researchin' discovered that is Dino-prose was originally "written for the Orillia Packet & Times newspaper' and that Mr. VanSinclair is the former promoter of the Toronto Musical Collectables Record & CD Sale.
Likes for this Dino-phile the coolest of cool comment that Lorne gives to our most beloved Dino comes near the end of the Dino-scribin's below that our Dino is, as we have tagged this Dino-post, "a transcendent listening experiene."  VanSinclair has other grand thin's to say 'bout our Dino likes "he was a great singer. In fact he was one of the best popular singers of the era. He had a wonderful, resonant baritone voice, he could hit low notes like nobody else but mostly, he had a way with a song that made it all sound soooo easy. Nobody could sing Italian love songs like Dino, though many tried."  And, also, "to my ears anyway, nobody sang a Dean Martin song better than the man himself. He was also a big influence on other singers, most notably Elvis Presley, who is said to have idolized him. Presley recorded many of his songs and re-worked others. Elvis' Surrender bears an uncanny resemblance to Martin's Return To Sorrento, and in comparison, comes up short."
However, we also need to note that we have a few disagreements with Lorne's Dino-reflection.  Well meanin'ly he states, "it strikes me as a bit ironic that the coolest of cool singers was not considered hip, wasn't really with it."  We completely contend that our Dino was absolutely the hippest of the hip and that there never was, never will be any one more "really with it" that our main man.
VanSinclair also well meanin'ly, but also incorrectly states that "Dean Martin had a carefully cultivated image as a womanizer, a man about town and an alcoholic, none of which was true."  Lorne is completely correct 'bout the "carefully cultivated image" but our Dino certainly have a bevy of beauties over the years, loved goin' clubbin' at the coolest of cool places to make the scene likes the Candy Store Discotheque, and loves liquid libations,'specially J&B scotch jokin'ly taggin' it "Just Booze."  Indeed after cuttin' the ties with his second wife, Jeanne, the '70s Dino's personal persona became more and more completely coolly congruent with his professional persona.
So, we woulda gives Mr. VanSinclair a thumbs up for his Dino-devotion while seein' some of our Dino's life and times differently that the writer does.  We sez our thank you very much to Mr. Lorne Sinclair for spreadin' his Dino-appreciato at "Vibrations.ca." and once 'gain provin' that Dino-adulation is incredibly international in it's Dino-scope.  To checks this out in it's original source, likes simply clicks on the tag of this Dino-gram.
We Remain.
Yours In Dino,
Dino Martin Peters

The word 'cool' is, well, really cool. It's one of the few slang words that's been around for decades and still means the same thing. A cool person is laid back, unflappable, really knows what's happening. Cool is used in music a lot; it's the ultimate compliment, so it strikes me as a bit ironic that the coolest of cool singers was not considered hip, wasn't really with it, but as more and more people are acknowledging, Dean Martin was the epitome of cool. 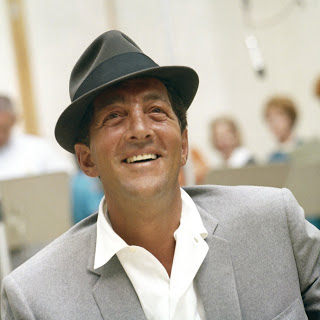 That was demonstrated in 2007 when producer Phil Ramone and others released a CD called Forever Cool where current stars, including actor Kevin Spacey, sang "duets" with Dean Martin. Dean Martin died on Christmas Day in 1995; the duets were made using his original vocal tracks with new instrumental backing. The CD was a commercial and critical success and one track, Baby It's Cold Outside with Martina McBride, was a hit on the country charts.

Dean Martin had a carefully cultivated image as a womanizer, a man about town and an alcoholic, none of which was true. He did have three wives (not at the same time), but he was a dedicated family man. He was not a party animal and although he often had a drink in his hand during his shows, it was a prop. Reportedly none of the "Rat Pack" (Martin, Sammy Davis, Jr. and Frank Sinatra) ever drank alcohol on stage. Sinatra and Davis did like to go on all-night binges after their shows, but Martin was not interested in joining them.

There is even a story, which I can't substantiate but sounds good, of a large party in Dean Martin's home at the height of his fame. Part way through, guests noticed Dean hadn't been seen for a while. After searching all over they finally found him in his room, alone, watching TV.

The image, of course is larger than life. Dean Martin has become a cultural icon, evidenced by the large number of Dean Martin "tribute artists" who make a living impersonating him. He was a comedian (with Jerry Lewis), actor and a born showman as well as being a singer. He excelled at all of them but it is often overlooked that he wasn't just a showman who could sing, he was a great singer. In fact he was one of the best popular singers of the era. He had a wonderful, resonant baritone voice, he could hit low notes like nobody else but mostly, he had a way with a song that made it all sound soooo easy. Nobody could sing Italian love songs like Dino, though many tried.

Virtually all of his biggest hits, and he had a lot including Sway, Volare, Memories Are Made Of This and That's Amore, have been recorded over and over again by other singers but, to my ears anyway, nobody sang a Dean Martin song better than the man himself. He was also a big influence on other singers, most notably Elvis Presley, who is said to have idolized him. Presley recorded many of his songs and re-worked others. Elvis' Surrender bears an uncanny resemblance to Martin's Return To Sorrento, and in comparison, comes up short.

According to on-line biographies, Martin began his career in 1937 under his real name, Dino Crocetti, singing with bands in and around his hometown of Steubenville, Ohio. He anglicized his name in 1940 and moved to New York City in 1943 to play the nightclubs. He did make a few singles in 1946 and 1947 for small labels, Diamond and Apollo but then teamed up with Jerry Lewis, became a major star and began recording for Capitol in 1948. He was always considered a mainstream artist so his records are not particularly collectable, they don't command a lot of money, which is a good reason to collect them.

Dean Martin released about sixty LPs over his long career, not all of them are great but many are. He recorded pop hits, jazz, movie soundtracks and he was the only member of the Rat Pack to record country & western. He even recorded a duet with Ricky Nelson (when both were still alive), his co-star in the movie Rio Bravo. A good Dean Martin collection can have a lot of musical variety, and you won't go broke building it. 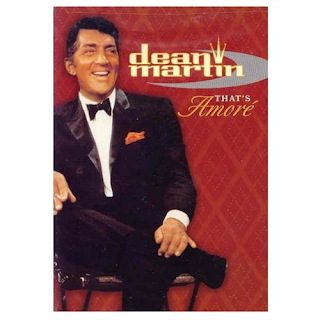 Virtually all his LP releases are available on re-issue CDs with original artwork, so you can go that route but you can also have some fun, and save some money, collecting the original vinyl. The hard part isn't finding the records, there's plenty around, but finding them in top-notch condition will take some time. Records like this were not considered works of art like, say, that leather-bound set of Beethoven symphonies that sat in a bookshelf for years. These were just popular records, cheap, disposable entertainment. They would be taken out at parties, stacked on record changers and played on old machines with heavy tone arms and worn out needles.

His recorded output falls into roughly three categories, most common are his 1960s hits on the Reprise label, there's a few movie soundtracks but for my money, his best are the recordings he made for Capitol. He had the best bands, the best arrangers, great songs and of course, those wonderful, high-ceilinged Capitol recording studios where all the singers and musicians played together, instead of having the vocals over-dubbed from a sound booth as was the later practice.

Some can be hard to find. His first album, Dean Martin Sings, released as a 10-inch LP on Capitol in 1953, certainly is. But even his last, an album of country songs called the Nashville Sessions released on Warner Brothers in 1983 doesn't turn up every day.

Now if you're of the rock 'n' roll generation, you may have to put up with your friends' derision, as I have, of appreciating the music of someone who is called a crooner. The term is often derogatory, applied to someone who has a great voice but no edge, nothing to say. Phooey. Some so-called crooners put across a song like nobody's business, and that's the essence of great singing. The best crooners, Bing Crosby, Dean Martin and Eddy Arnold come to mind, were first class artists and deserve to be treated as such. Most of all, they provide a transcendent listening experience. To paraphrase the song, that ain't a kick in the head.

Yea...Lorne gets a thumbs up from me, as well, pal. Obviously a Dino-holic in his own right. All the facts & figures don’t need to be perfect. It all comes down to personal opinions usually anyway. ‘Nother great find, DMP!

Hey pallie, likes Danny-o, thanks once 'gain for your Dino-devotedly Dino-perspective, which per usual is right Dino-on! Lookin' forward to 'nother swank serenade with our Dino tomorrow.