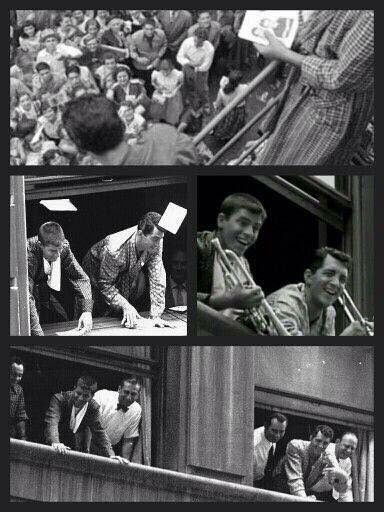 Hey pallies, likes early Happy Fourth of July Greetin's to all youse Dino-holics out there.  Likes last July, likes  we were  doin' a bit of Dino-searchin' on youtube for somethin' remarkable relatin' our most most beloved Dino to this most most beloved USA Holiday, when Dino-low and Dino-behold likes we came 'cross this very very coolest of clip of our Dino and his partner Mr. Jerry Lewis fantastically filmed on July 4, 1951.  We are totally totally thrilled to reprise it here 'gain this Dino-holiday.

Likes pallies likes how completely cool to be able to review this magical moment in Dino-history with this vivacious vid clip!  Happy 4th of July to all, and whatever else you do, keeps lovin' our most most beloved Dino!  Likes, to view this hysterical historical Dino-vid at youtube, simply clicks on the tag of this Dino-message.

Dean Martin & Jerry Lewis at the New York Paramount 4 July 1951. Absolute bedlam on 44th Street! Come on up for coffee!
Posted by dino martin peters at 8:30 AM

Man! What a day in the life & times of our Dino!
Take me back to those days! Please! Haha!!

Hey pallie, likes Danny-o, I loves the lovin' chemistry that our Dino and Jerry show in these hysterical historical marvelous moments that we are so powerfully privileged to relive and view through technology. Likes we equally echoes your Dino-desire, "Take me back to those days! Please!"