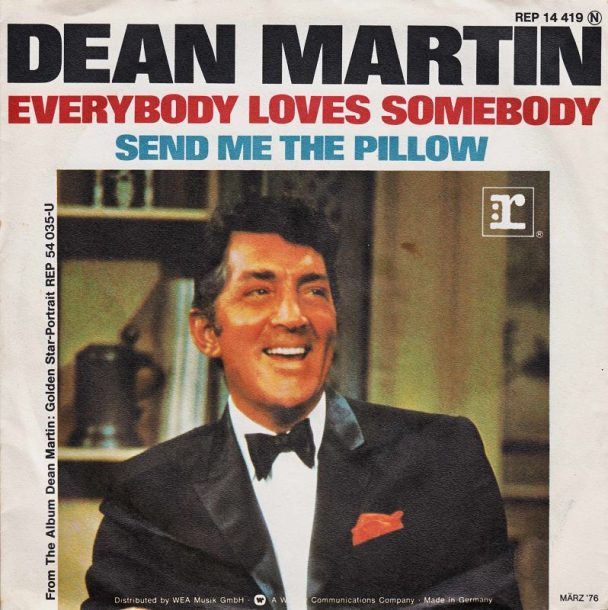 Hey pallies, likes there's yet  'nother deeply deep Dino-historical note to celebrate on this Dino-day of Dino-days.  From the musical blog, "Collecting Vinyl Records-for the latest vinyl record information," from the potent pen of Mr. Robert Benson comes word that July 11th is the 57th  awesome anniversary of our most beloved Dino's most golden croon, "Everybody Loves Somebody" first broken into the Top 40 on it's way to numero uno on tomorrow in 1964.

How thrillin' it is to honor this day of days in the life, times, and teachin's of our Dino when the world startin' comin' to his feet to learn the true true nature of amore from the man who is AMORE!  "Everybody Loves Somebody Sometime" not only became our Dino's theme song, it taught and still is, and always will be teachin' pallies everywhere the beauty and power of love as only our Dino coulda proclaim it!

Thanks to Mr. Benson for remindin' the universe of this incredibly important majestic moment in all of Dino-time.  In homage of our Dino, we are sharin' a vid clip of our most beloved man croonin' his most beloved tune....the tremendous theme song from his Dino-show!  Likes 'gain 'cause July 11th in on Sunday, we are coolly celebration this Dino-historical marvelous moment this very Dino-day.

In 1964, although the music world was being dominated by rock and roll, crooner Dean Martin's "Everybody Loves Somebody" cracked the US charts on its way to the Top Ten. This would be Dino's first Top 40 hit since 1958.
Posted by dino martin peters at 8:07 AM

Very important day, for sure, pals! Thanks for the info, DMP!

Hey pallie, likes Danny-o, as youse always sez the Dino-pleasure is all mine. Keepin' the Dino-light glowin' 'n growin' with youse.