.....and the hippest card in the deck was the laid-back, velvet-voiced, whiskey-infused me, i even drove around with vanity license plates reading 'DRUNKY'...... 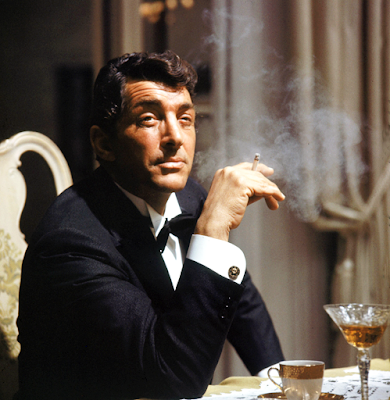 Hey pallies, likes as we are so frequently fond of sayin', "Youse just never ever know where Dino-devotion will show up next.  Likes recently we were Dino-searchin' the ol' world wide web with the awesome aid of our pallies at google when we happened 'pon a bodacious blog pad tagged "Falling On A Bruise" where a chick tagged Lucy P. holds forth.  We got the info on her name through her email address which also indicated that she hails from somewhere in the United Kingdom.

Ms Lucy's game is hostin', as she puts it, "special guest bloggers" who supposedly retell their life, times, and teachin's, which, likes of course, are scribed by Lucy P and one of her pallies.  Likes youse guessed it pallies, one of Ms Lucy's "guests" was none other then our King of Cool...our one, our only Dino.   We gotta 'fess up that we were interestin'ly intrigued by the cool concept of her blog and pleasantly pleased that she made the cool choice to honor our Dino in this way.  Unfortunately, in readin' here prose, it is crystal clear that her knowledge of our Dino is limited to a few facts, of which not all of 'em are factual.  That said, Dino-philes, we do greatly groove on Ms P's Dino-description that we have chosen to tag this Dino-devotional, " .....and the hippest card in the deck was the laid-back, velvet-voiced, whiskey-infused me, i even drove around with vanity license plates reading 'DRUNKY'."

While we here at ilovedinomartin are appreciative of Lucy P. efforts, we wish  that she had taken her assignment more seriously and scribed with more care.   While we have always known that our Dino never ever needed someone to defend his honor and doesn't to this very Dino-day, we just woulda say to Ms Lucy that our Dino was a supremely steller big screen success....and we advise her to take opportunity to view our Dino in one of his radiant roles, that of the Dude in "Rio Bravo.  And, we would also likes to point out that our coolest of cool,  hippest of hip, randiest of randy Dino was by no means a "tee-totaller."   We coulda takes umbrage with other of her Dino-perspectives, but the two that are most glarin'ly incorrect are the ones that we just mentioned.

No matter what, we are still deeply delighted to see 'nother blogger lift up the beloved name of our most beloved Dino and keepin' his Dino-legacy flowin' as freely as one of his alcoholic liquid libations.  So thanks Ms Lucy for your Dino-centric post.  To checks this out in it's original source, likes simply clicks on the tag of this Dino-gram. 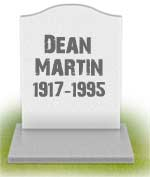 The Rat Pack was the epitome of cool in the 1950s, and the hippest card in the deck was the laid-back, velvet-voiced, whiskey-infused me, i even drove around with vanity license plates reading 'DRUNKY' but it took a lot of hard work to get to the permanently sozzled state the public loved me for, an ambassador to the world of wine, women, and song.

I began life as a boxer under the name Kid Crochet which admittedly isn't a name to drive fear into my opponents but it was a play on my real name, Dino Paul Crocetti, but after 12 professional fights and ending up losing 11 of them, i decided standing up while being punched in the face repeatedly wasn't my strongest suit so i had a rethink of my career path and got a job as a stockboy at an underground casino and worked my way up to blackjack dealer, then croupier at the roulette table, and finally, a singer at the casino’s lounge under the name Dino Martini and then Dean Martin.

As crooners like Bing Crosby and Perry Como were hot, i fitted in nicely and began singing in nightclubs in New York City and met people like Frank Sinatra, Jerry Lewis and Lou Costello and it was Lou who paid for my nose-job to reset it after my face wrecking boxing career.

My new nose opened doors and i was touring stadiums with Frank Sinatra and Sammy Davis Jr. and making Television and film apparanaces but they said i was never any great shakes as an actor but i was in films with some great actors who could make the audience beleive anything so i didn't really stand out.

My strong point was TV where i could just lark about, slur and sing a few songs and carry around a glass of whiskey because drinking was a big part of my persona, i made sure that i always appeared on stage with a drink and a cigarette in my hand.

It was the years of heavy smoking that led to my lung cancer and i died on Christmas Day but i will always be remembered as the hard partying, hard drinking guy but remember that bit where i said i wasn't a very good actor.

Well, for someone who made a career out of being half sozzled, i was a tee-totaller, my whisky was a apple juice and i would show up with the rat-pack and leave by the back door and go home so how about that for some fine acting, now ain’t that a kick in the head?

Posted by dino martin peters at 8:08 AM

Entertainin’ read, pal. I guess I’ll leave it at that. Haha!! Anythin’ Dino is cool with me!

Hey pallie, likes Danny-0, we hear youse dude....what we chose to tag as the title for the Dino-gram is what drew us to sharin' it. And, it also is sort of a neat novelty a la Dino!