Hey pallies, likes we are back once Dino-'gain with 'nother stunnin'ly stellar Dino-as-Matt-Helm review as found on the greatest of great fine flick blog "CMH" - "Classic Movie Hub."  Likes this time we meet with a Dino-holic tagged Orson DeWelles who has coolly coolly crafted a radiantly rad review of Helmer numbero uno, "The Silencers," which btw is our most delightful Dino-phile pallie Danny-o's fav Helmer....so this Dino-gram goes out to youse Danny G..

This post was first shared at a blog pad tagged "Classic Film Freak" which can be located HERE.  And, likes we discovered that we previously did an excellent essay on this superb scribin's a la Dino on March 3, 2014 that youse can lovin'ly locate HERE.

Likes we were superbly smitten by Mr. DeWelles wonderfully wise 'n witty Dino-thoughts back in 2014 and we likes remain awesomely attracted to his Dino-reflections over seven years later...this very Dino-day.  What we have decided to share with all youse Dino-holics are our potent praise of Orson's Dino-efforts when we first imbibed 'em which follow below:

Man-o-man what perfectly primo prose on Helmer numbero uno. Thanks for homagin’ our most beloved Dino in this perfectly perfect way. You capture Dino as swingin’ spyster Matt when these wonderful words….”His performance, though not by any means Academy worthy, is perfect for the picture. It is challenging if not impossible to see where the acting ends and the reality of his own self crafted image begins. He leers, kvetches, and spouts one liners with equal ease. The entire series is a ribald blend of one-liners, booze, women, and impromptu song parodies, all sung by Martin of course.” Never was, never will be anyone as cool as the King of Cool….oh, to return to the days when Dino walked the earth. Know that your reflections are being shared this day at ilovedinomartin. btw….gotta ‘fess up that I am among those who digs “Murder’s Row” the mostest!

We're guessin' that many many of our Dino-readership may have missed this Dino-action back in 2014 and even if you did partake then...it is certainly worthy of our Dino-devotion to simply soak in Mr. Orson DeWelles powerfully potent praise of our most most most beloved Dino in Helmer numero uno, "The Silencers."  Kudos to our pallie Orson for deeply deeply diggin' our Dino and for sweetly sharin' his Dino-adulation with his blog readership.  The world coulda use a ton more Dino-devotees of the quality of Mr. DeWelles!

The Silencers (1966) with Dean Martin 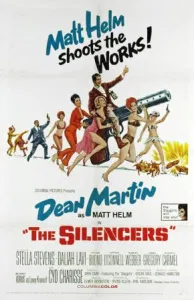 Although the last generation would think of the Austin Powers series as perhaps the most popular of all the humorous tongue-in-cheek parodies of the James Bond film franchise, it is not the best.

That claim rightfully falls to the ingenious if ever so campy Matt Helm series of the late 1960s.  Written by Donald Hamilton, the written canon of the Matt Helm novels span twenty seven entries, quite a bit more than even Fleming’s own 007.  Unlike Fleming’s creation, the films bear almost no relation to the books, outside of Matt Helm’s presence in them.  Even the most tepid of the Bonds (at least those based on a Fleming originals) has a few points of similarity.  Hamilton’s original writings are rather hard hitting spy novels, and nothing could be farther from the truth in the Matt Helm series.  If anything, the exact opposite is the case.  However, that doesn’t make the films anything less than fun.

Like their successor Austin Powers films, the Matt Helm is a blending of camp, humor, and action.  The blend for Helm is a bit more even with the action being quite a bit less comical.    The Silencers was the first of the four Helm pictures. 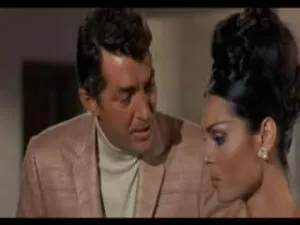 The Silencers 1966 2The Silencers opens with our semi-retired hero, played by Dean Martin, enjoying himself in the swankiness of his 1966 bachelor dive, which is full of all of the latest gadgets.  There’s a spinning bed which also transports Helm- and any potential lady love- to a good sized swimming pool.  It can even tilt to dump its occupants in as well for a nice touch.  Other comforts of home are dual automatic coffee makers, rotating drying spindles (making bath towels unnecessary), and automated dressing devices.  Way too cool and you’ll see variants in later Helm films in addition to various homages in the Austin Powers films.

Though it looks dated now, and if you didn’t know better you’d think The Silencers came out in the last few years given the current trend for retro campiness.  Helm also has his own version of “Q” branch which provides a camera with throwing knives, a gun which shoots backwards, and a coat with detachable grenades disguised as buttons among other things.  Again, everything is a parody, but we are all in on the joke. 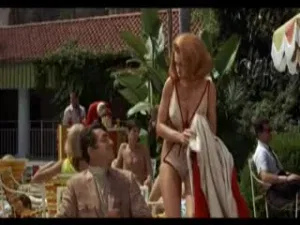 Helm too has a veritable bevy of women around him, with Stella Stevens, Daliah Lavo, Nancy Kovack, and Cyd Charisse all sharing screen time with the Ohio-born crooner.  There is more than enough skimpy clothing to go around and between the flashes of flesh, repeated dousing of women with water, and dialogue full of double entendres the sexual tension gets pretty well stoked, especially given the times.  But again, it was the last 60s.  There are also other “A” listers involved, ranging from the score by Elmer Bernstein to the producer, the infamous Irwin Allen.

Then there is Dean Martin himself, who hams it up wonderfully for the picture.  Though his spirit for the series flagged as time went on, here he is fresh and fully engaged.  His performance, though not by any means Academy worthy, is perfect for the picture.  It is challenging if not impossible to see where the acting ends and the reality of his own self crafted image begins.  He leers, kvetches, and spouts one liners with equal ease.  The entire series is a ribald blend of one-liners, booze, women, and impromptu song parodies, all sung by Martin of course.

Helm is drawn out of retirement to help his old employer, ICE (Intelligence and Counter Espionage).  The overall plot is for him to defeat the BIG O organization (Bureau of International Government and Order) from starting the next World War with a rogue atomic bomb.  The plot really doesn’t matter, just buy into it knowing Martin’s style and that he will eventually win out and you will find The Silencers enjoyable fun. 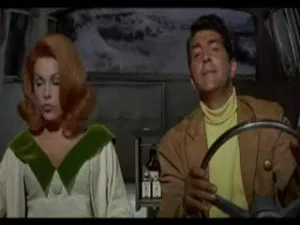 There is also a nice jab directed at fellow Rat Packer Frank Sinatra.  While in a car one of his many loves tunes the radio to Sinatra singing “Come Fly with Me.”  On hearing it Martin grimaces “Oh turn him off, that guy’s terrible!,” and has her change the station.  On comes Martin’s own “Every Loves Somebody Sometime.”  Martin relaxes and coos, “Now that’s a guy that can sing!”  A cheap joke but a good one.

Like all of the Helm pictures the production values are questionable, though perhaps this was intentional.  There are lots of poorly shot rear projection shots, mainly of car chases.  Many of the sequences are obviously sped up as well, though strangely it seems to work.  The sets also bear a rather cliched resemblance to the vast underground lair’s of the early Bond films.  And the BIG O looks a lot like a SPECTRE knockoff as well.  At the film’s conclusion too is another steal from the Bond series, though here Helm expands it a bit. 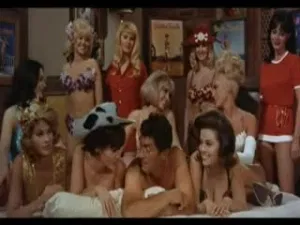 Each Bond film from first to last (I think), has stated either “JAMES BOND WILL RETURN IN [Insert Title Here]” or simply “JAMES BOND WILL RETURN,”  with the second of the two being used since original Fleming titles got scarce.  For Helm, we not only get a similar tease, but we also get a video tease from Martin and an additional bevy of beauties.  This continued for the entire length of the series, with the last Helm picture teasing The Ravagers as the next installment.  As we all know, The Ravagers was never made, in all probability to Martin’s diminished enthusiasm for the project.

But the overall quality of the series dropped significantly from before that time, with The Silencers being the strongest by far of the series- though in the interests of full disclosure some prefer the immediate sequel, Murderer’s Row.  As the series progressed, Dean Martin gets visibly tired of the bit, and there is more than a little redundancy in the films.  The Silencers also has the closest semblance to a plot, such as it is.

Orson DEFINITELY does s great job on this review! Lotta fun to read. Sums the flik up perfectly & I think will surely bring many new Helm-diggers into the mix. A post absolutely worth sharing twice.

Hey pallie, likes Danny-o, we are not surprised that you are in Dino-agreement, but we always always awesomely appreciate your Dino-imput as it always always adds so much to the Dino-dialogue that takes place 'round this little Dino-waterin' hole. Keeps lovin' 'n sharin' our one, our only DINO!

Just some FYI... The Silencers will be airing again next Wednesday on TCM at 5:45am! This is perfecto for all the Dino-lovin’ early birds out there!

Hey pallie, likes Danny-o, thanks for sharin' the Dino-news man...likes what coulda be a better way to start a new Dino-day that groovin' our our main man as swingin' spyster Matt Helm in your fav Helmer! Keeps lovin' 'n sharin' our one, our only DINO!