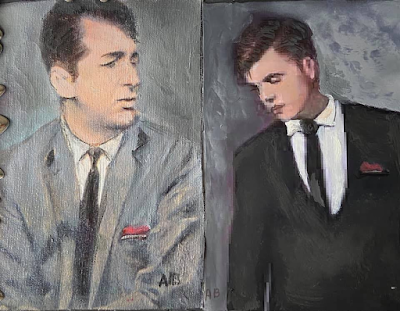 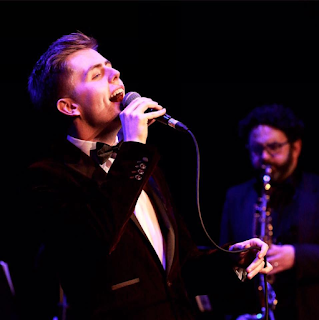 Hey pallies, likes one of the thin's we mightily missed by bein' AWOL from our humble little ilovedinomartin waterin' hole is keepin' up with our youthful pallie from Ireland, Mr. Daire O'Hagan.

Faithful readers of ilovedinomartin will remember Daire from a mighty multitude of Dino-grams that have focused on Daire's awesome adulation of our most beloved Dino and his energetic emulation of our  Dino in his risin' musical career.  Likes if you puts Mr. O'Hagan's tag into the ilovedinomartin blog search engine at the top left of our home pad you will be able to see a neat number of Dino-grams fabulously focused on his deepest of deep devotion to our Dino and how our Dino is Daire's "Hero" and "Idol" proudly professin' on his musical facebook page HERE   that "In my humble opinion the greatest entertainer that ever lived."

Well as we are now powerfully playin' catch up after our long lingerin' absence from ilovedinomartin, we decided on this last day of our annual month long celebration of "The Day That Coolness Came To Earth" in huge homage of our Dino's June 7th entrance to our planet in 1917 that we would share a recent Dino-inspired vibrant video shared by Daire on both his facebook pad and at his youtube pad as well of the coolest of cool classic croon of our Dino "Houston."  As you watch and listen all youse Dino-philes will note that Daire has slowed it down from our Dino's original version, but there is no mistakin' that Daire's awesome adulation of our most most beloved Dino sweetly shines forth in this delightful Dino-trib.

Likes, we were first introduced to Daire when he posted his first vid of Dino-devotion at his facebook music page on the 100th anniversary of our Dino's birthday.  That vital vid was of the Dino-classic, "My Pony, My Rifle And Me."  When we first learned of this Irish laddie who at the time we tagged "Deanager Daire" 'cause he was still in his teens, our hearts were fabulously filled with the deepest of deep Dino-delight 'cause Mr. Daire O'Hagan reverently represents the next generation of Dino-devotees and with pallies likes Daire openly and affirmatively spreadin' their Dino-devotion we know that the legacy of our Dino...his life, his times, and his teachin's will continue to be swankly spread 'cross the Dino-universe forever and forever.  So, on this last day of  our ilovedinomartin 2021 celebration of The Day That Coolness Came To Earth" we lovin'ly lift up Mr. Daire O'Hagan and once 'gain thank him for superbly sharin' his deepest of deep devotion to our Dino in his up and comin' career as the next gen of crooners drawin' tons of today's youth into the Dino-fold...helpin' to welcome others into our Dino's wonderful world, bringin' Dino-happiness to many more pallies.

ilovedinomartin solemnly salutes Mr. Daire O'Hagan and truly truly thank  him for all he has done and all he will continue to do to proudly profess his awesome adulation of our one, our only Dino.  Enjoys Daire's version of our Dino's "Houston," all youse Dino-philes, and if youse are able gives Daire a cool comment to encourage his continuin' devotion to our Dino via his wonderful music.  To checks this vid out at Daire' youtube pad, simply clicks on the tag of this Dino-message.

‘Nother great job by our pal, Daire! I also lost track of him over the past half year. Really cool to see he’s still proudly wavin’ his Dino-digger flag!