Just watched the guilty pleasure that is Murderers' Row, the second film in the Matt Helm 60's era spy series that starred the ever reliable Dean Martin.

Hey pallies, likes today we return to the bodacious blog, "CMH" - "Classic Movie Hub" where we shared those grooviest of groovy Dino-quotations from "Murders' Row" Dino-day before yesterday. Likes it turns out that "CHM" is the greatest of great goldmine of Dino-delights and we know that we are goin' to be sharin' tons and tons of Dino-treasures.  Today we fabulously feature a rad review of our fav of fav Dino-Helmer caper, "Murders' Row" scribed by a true blue Dino-phile tagged Monty, originally found on the blog "Noir and Chick Flicks."

Likes we knows we have made the acquaintance of Monty before and likes we just did a little Dino-searchin' to find this remarkable review at it's original pad https://dawnschickflicks.blogspot.com/2010/05/dean-martin-as-matt-helm-in-murderers.html 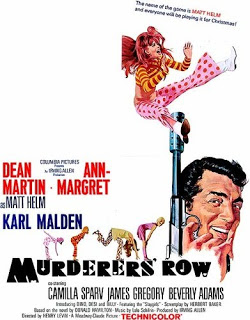 Just watched the guilty pleasure that is Murderers' Row, the second film in the Matt Helm 60's era spy series that starred the ever reliable Dean Martin. This series came about all due to that English gent across the water..James Bond. That franchise ignited the whole spy craze of the 60's and everything from Get Smart, I Spy, The Man From UNCLE, In Like Flint, and Helm all enjoyed success. Dean Martin's take as a super spy who always saved the world but he did it with a cavalier attitude. Always had time to drink and make merry for the women. And quick to drop a witty one liner. You ask how is that different from Bond. Well, where as Bond for the most part kept the humor and comedy to a minimal, that is until Roger Moore came along, Helm thrived on it. He seemed to be itching to crack a joke or take a drink even while the action is going on. And seemed to be having fun doing it.

In his second adventure, he travels to Monte Carlo to find out what happened to a Doctor Solaris, who has created this destructive helio beam that bad guy Julian Wall (a gung ho Karl Malden) wants to use to destroy Washington, DC. In Monte Carlo, Matt befriends Solaris daughter Suzie (Ann-Margret) and together they team up to find her missing dad. Matt also has to deal with a henchman who has a steel plate on his head (very Bondian) and a beguiling femme fatale named Coco (the fetching Camilla Sparv). 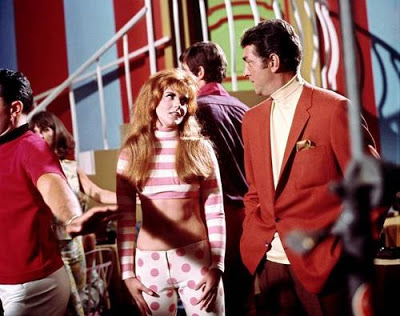 Murderers' Row is a lightweight caper, on par with the weakest Bond films. You could almost label it a comedy with some action scenes because there is an abundance of humor, mostly supplied by Martin, who is definitely the center of the movie. Ann-Margret gets several high energy dance scenes that you can tell the directors told her to go and just have fun. The age difference between Martin and Ann does make their relationship a tad creepy. Dean was 48 and Ann was 24. But they still make quite the team. It's strange seeing Malden as the villian but he is effective. His assistant Coco is a striking presence in the film. Every time she appears it seems the camera follows her around like a puppy in love. Sparv probably gives the best performance out of all the actors present here. And let me not forget Matt's assistant Lovey Kravezit (great name and played by Beverly Adams). She is like the 60's version of Iron Man's assistant Pepper Potts (Gwyneth Paltrow).

This film is not be taken seriously, a film to be seen to have some laughs with and view a good representation of the 60's. Dean croons the energetic I'm Not The Marrying Kind which plays out several times during the film. And I'm not the one to point out fashion in film, but Ann-Margret wears this killer black and white top with pants that is to die for.

Check out the pic to your right. You know your clothes are awesome when the villianess says "I must say the girl

has great taste in clothes". Classic. 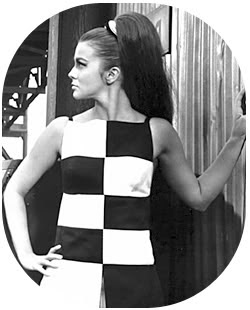