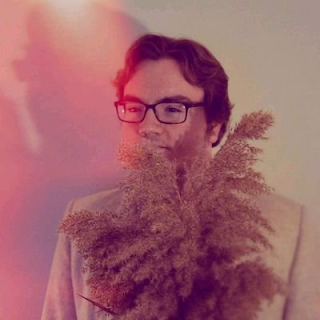 Hey pallies, likes as we tries our Dino-best to get back into the swing of supremely spreadin' the deepest of deep Dino-devotion here at our humble little ilovedinomartin Dino-conclave, we can't image a better startin' space then to likes awesomely accent our most beloved Dino as swingin' spyster Matt Helm in the quintessential quartet, groovy of grooviest big screen epics that have come to be known as Matt Helm Lounge.  Likes this very Dino-day we takes all youse Dino-philes to the new-to-ilovedinomartin blog pad "CROOKED MARQUEE" where swingin' scriber Mr. Jeremy Herbert holds forth.  (Jeremy is pictured on the left.)

Herbert's bio tells us that likes Jeremy "enjoys frozen beverages, loud shirts and drive-in theaters. When not writing about movies, he makes them for the price of a minor kitchen appliance. Jeremy lives in Cleveland, and if anyone could show him the way out, he'd really appreciate it."  Today we awesomely accent Jeremy's post, "The Inessential Matt Helm," which of course no true Dino-phile woulda 'gree with, but we loves all the delicious Dino-images swankly shared and we don't mind

that Mr. Herbert has some fun in describin' our Dino as Matt Helm 'cause we know that truly truly this Dino-Helmer tribute will certainly bring many more into the Dino-fold.  After all how many big screen flicks  gets these kind of groovy reviews havin' released dates that are over a half century old.

Besides pallies, we are on the same wonderful wavelength as Jeremy when he proclaims that Helmer numbero duo, "Murders' Row" when Herbert professes 'bout this fantastic flick, "A slicker, quicker, funnier follow-up that fixed everything wrong with round one, including a noticeable bump in prestige."  Jeremy uses his coolest of cool craft of scribin' well and we think youse will find much Dino-pleasure in readin' his Dino-reflections.

To check this out in it's original format, likes simply clicks on the tag of this Dino-gram.

In Quentin Tarantino’s Once Upon a Time… in Hollywood, Sharon Tate gleefully catches a showing of her biggest movie yet — The Wrecking Crew. It’s a great scene. Too many people are talking about that already. So let’s talk about The Wrecking Crew and the proto-Austin Powers franchise it brought to an end. This is the Inessential Matt Helm.

Novelist Donald Hamilton introduced Matt Helm to a spy-crazy public in 1960 with Death of a Citizen. If James Bond is a secret agent who only kills when the mission calls for it, then Matt Helm is a government-sanctioned assassin who does nothing but.

We won’t be talking about that Matt Helm.

In 1965, Columbia Pictures optioned the eight published Matt Helm novels (there are now 27) and handed the reins to producer Irving Allen, who passed on adapting Bond years earlier. He still wanted a piece of the spy pie, but he knew he couldn’t beat 007 at his own game. So he turned to Dean Martin.

One year after Thunderball, Dino banked a bigger payroll than Sean Connery to “play” Matt Helm in The Silencers. His Matt Helm is just Dean Martin with a stunt double. He’s introduced, mid-nap, dreaming about seducing models he photographs for Playboy-knockoff “Slaygirl.” The man knows two things — women and booze. Anything else he treats with apathy or disdain. His home is a pick-up artist’s Rube Goldberg machine. A button over his bed rolls it across the floor and into a swimming pool-sized bubble bath. The oversized bar of soap hides a bottle of whiskey. Helm drinks it, then gets out and fixes another drink, but not before his personal assistant, Lovey Kravesit, joins him for a dip.

He’s Dino, alright, and if you forget it, a dozen Dino songs will fill you in. After begrudgingly giving up a trip to Acapulco to stop the world-ending evil organization Big O, he croons, “Heading for Big O, but not the Big Olé.”

The Silencers still bears the rougher edges of its blockbuster target: Matt shoves a woman to her assumed death because she might be a counter-spy. But the mission statement comes late to stomp out any pesky darkness. When a double agent tries to seduce Helm to join Big O, they ask if killing for the good guys is any different than killing for the bad. “Yes,” Helm says without thinking. God bless Matt Helm, a good guy so good he asks the passenger to mix the drinks in his gadget-riddled “Sex Mobile.”

Columbia couldn’t wrestle its other spy parody, Casino Royale, into theaters for Christmas 1966, so they double-timed the Matt Helm sequel to take its place. The result is the From Russia With Love of Matt Helm. A slicker, quicker, funnier follow-up that fixed everything wrong with round one, including a noticeable bump in prestige. Karl Malden plays Blofeld-in-all-but-cat and uses a different accent every time he speaks. Ann-Margret spins and smiles and burns so blindingly bright whenever she’s onscreen that you almost forget she’s literally half Dino’s age. If you’ve ever wondered what the legendary Lalo Schifrin could’ve done with a Bond score, this is as good as it gets. Even the slowest moments of Murderers’ Row sound like a stylishly choreographed bar-fight at the Riviera.

After a fake funeral attended by his ex-lovers and mourned with a touching rendition of “Roll out the Barrel,” Matt goes off the grid to stop the Big O from melting Washington with a sunbeam. The resulting adventure takes Dean Martin’s stunt double to the postcard-ready French Riviera.

Dean refused to leave the States to film, beginning the Helm trend of watching an athletic stranger in a wig throw a punch in wide, only for the pushing-50 Dino to land his tanned-ham fist in close-up with projected b-roll behind him. In his honor, it’d make an expert-level drinking game

And expert-level drinker he is. Top secret orders hide in the one place Matt would look: the inside of a liquor bottle stashed in his car. Helm instead pulls out his flask and threatens, “You say one word and I’ll kill ya,” before drinking at the wheel.

Different times and all, though this one is dangerously specific in ways Bond wouldn’t be until the 1970s. Leave it to Matt Helm to lumber through the set of Laugh-In like a pompadoured dinosaur and learn what a “discotheque” is from Ann-Margret’s flowerchild.

But when the central gadget is a gun that fires 10 seconds after the trigger is pulled, requiring the target to turn the barrel on themselves to make sure it’s loaded, you can pretty much get away with anything. Murderers’ Row does.

Director: Henry LevinCoat: Technicolor RedTurtleneck: WhiteBest Gadget: (tie) Belt buckle disintegrator, inflatable hotel roomIs The Villain The Same Nationality As The Actor Portraying Him? NoSinatra Reference: A lover gets steamy when “Strangers in the Night” plays and he marvels that she likes Perry Como that much.

The modern scourge of Razzie Awards can be traced back to the comparatively harmless work of the Medved brothers. Their inaugural assault, The Fifty Worst Films Of All Time, included Matt Helm #3, The Ambushers.

This one provided the most material for Austin Powers — bra guns and Will Ferrell’s entire character, Fez — and with good reason.

Depending on your mood and sobriety, The Ambushers is either enjoyably ramshackle or wincingly incompetent. Matt’s latest gadgetmobile has an inflatable hotel room in the trunk, complete with a functioning lamp and refrigerator. The MacGuffin — a stolen UFO — can only be operated by women because of “electromagnetic fields.” Matt might finally meet his match in Sheila Summers, but she also gets the ickiest scene in the series, wherein a killer stowaway offers a less-imminent death in exchange for sex.

That drinking game is fatal here for the finale alone. Dino sits casually astride a motorcycle before the shakiest background plate in film history, intercut with a stuntman roaring down the gravel alongside a runaway train.

The good-bad moments are good enough. A guy gets Augustus Glooped to death with beer. But when Helm and Summers disguise themselves as sleeping Mexican stereotypes, you start remembering how short life is.

Silencers director Phil Karlson returns to tip the scales back to something resembling reality. The scheme is more traditionally capitalist (stealing gold bricks) and Matt once again makes his entrance dreaming about models. But everything’s a little slower. The jokes — “That’s where it’s at!” is a quote I wrote down that could’ve plausibly been used in any scene — the action — the middle hour is mostly Matt stumbling into lavish bedrooms and trusting women he shouldn’t — and ol’ Dino himself — he only played Matt Helm for three years, but you can count the miles under his eyes.

This is what gave us the Austin Powers gag about Europe looking exactly like Southern California. The villain’s train turns into a bachelor pad at the push of the button, implying every form of transportation in the Helmiverse doubles as a motorized sex dungeon. The result is something less accidentally entertaining than The Ambushers, but not quite intentionally entertaining to compensate.

But at least there’s Sharon Tate. She is as effervescent as Once Upon a Time promises, even if her character isn’t even the best klutz in the series. The movie gives her glasses and treats it as a religious revelation when she takes them off and becomes Attractive. Her shining moment comes late as she messes with a computer and unwittingly blows up whichever room of the high-tech mansion Matt’s hiding in at the time. It’s enough to make you want more of her.

So did Dino. She would’ve been the first leading lady to return in a Helm sequel, announced at the end as The Ravagers. After her death, Dean Martin lost interest in the role and walked away.

Fifty years later, the Matt Helm Cinematic Universe is best known as that footnote in Once Upon a  Time … in Hollywood. An appropriate fate for a franchise that could’ve only happened with an aging star who never changed, in a time where everything was, when spies could be shameless swingers who own a suspicious quantity of Dean Martin albums.

Hey pallie, likes Danny-o, the coolest way to celebrate the coolest dude ever is to view your coolest of cool Helmer fav..."The Silencers!"