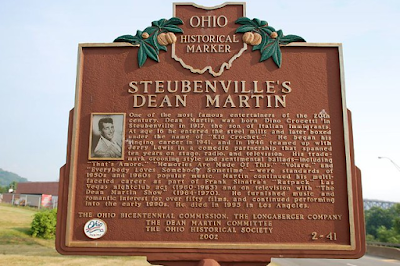 Hey pallies, likes once 'gain our Dino-hearts are fully full of Dino-awe as we came 'cross an excellent editorial from our Dino's hometown rag, "The Herald Star."  Like as youse will reverently read below, in huge homage of the 104th anniversary of our most beloved Dino's descent to earth, the hometown pallies in Stu-ville are back with their annual cooler then cool celebration of our King of Cool, the Dean Martin Hometown Celebration this weekend.

Likes the unknown wordsmith from "The Herald-Star," who put pen to paper has coolly crafted likes one of the most touchin' 'n tender tributes to our one and only Dino that we have ever read.  Likes it totally totally gives us the biggest of big Dino-buddha-grin to know that there are pallies in our Dino's home pad who continuin' to hugely honor their hometown  hero.  Our deepest desire is indeed to make pilgrimage to Stu-ville...to walk where our Dino-walked and breath the air that our Dino-breathed.

ilovedinomartin sweetly shouts out our absolutely awesome appreciato to the supremely swank scriber from the Stubenville Herald-Star who has done our Dino proud in this engaging energetic editorial of Dino-adoration.  To checks this out in it's original format, likes simply clicks on the tag of this Dino-report. 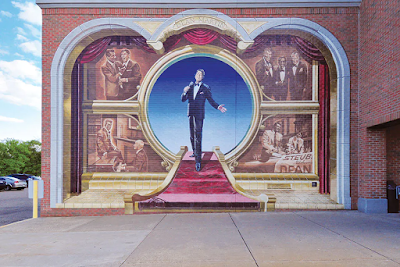 His talent made him, even by today’s standards, larger than life.

He was the symbol of the era of cocktail cool, hanging out with his pals, holding a cigarette in one hand and a glass of whiskey in the other, a beautiful woman or two not too far away.

Together with Frank Sinatra, Sammy Davis Jr., Joey Bishop and Peter Lawford, Dean Martin was a part of the famous Rat Pack, entertainers who brought the once-sleepy little town of Las Vegas to life in the late 1950s and early 1960s.

Martin’s name continues to carry magic, some 104 years since he was born as Dino Crocetti in Steubenville on June 7, 1917.

And, it’s appropriate that our area celebrate his legacy during this week’s Dean Martin Hometown Celebration.

He rates among the most versatile of entertainers, successfully appearing in live shows — his work in Las Vegas remains legendary — in films — think “Rio Bravo” and “Airport” — and on television — his “Dean Martin Show” was a top-rated program for NBC from 1965 to 1974. But he’s best remembered for his music, providing popular hit after popular hit, with his signature song “Everybody Loves Somebody” even knocking “A Hard Day’s Night” by the Beatles from the top of the Billboard charts in 1964.

The event, which will run Thursday, Friday and Saturday, will feature open houses at the Jefferson County Historical Museum and discounted tours of Historic Fort Steuben on all three days.

Thursday will see a performance by Beatlemania Magic at the Berkman Amphitheater and the annual Dean Martin Karaoke Contest at the Spot Bar, an event that traditionally has brought participants from all parts of the globe.

There will be street parties with live music, food and vendors in the 200 block of South Fourth Street on Friday and Saturday, a car cruise Saturday morning and free trolley rides to the museum Saturday afternoon. Martin tribute shows will be held at the Spot Bar on Friday and Saturday nights, with a $10 cover charge set for both evenings.

The event again will overlap with the Holy Trinity Greek Orthodox Church Greek Food Festival, which will continue through Friday at the corner of South Fourth and South streets, which means there will be ample opportunity to celebrate our region and its heritage.

This week’s events offer everyone a chance to sit back, relax, not get too caught up with everything that’s going on around them and just enjoy life — which make them the perfect way to remember Martin and the contributions he made to the world of entertainment.

Glad to see that Stubenville is still honoring its most famous son! There had been talk of abandoning the festival after 2017 (our Dino's 100th birth-year anniversary).

Hey pallie, likes Miss AOW, how fantastically fab that youse where able to walk where our Dino walked and breath the air that our Dino breathed!