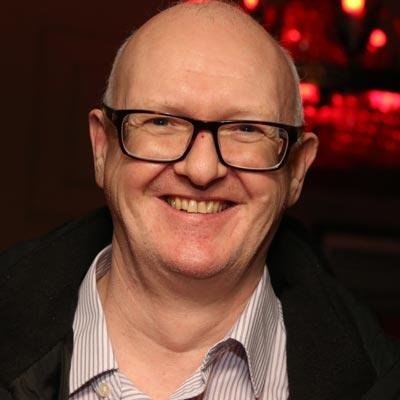 Hey pallies, likes believe it or not, it's the 10th day of Dino-winter-month  and we simply can't believe how quickly the days are passin' in this sweetly special season of Dino-devotion.  Today we have a deeply delightful Dino-wintery post from the all thin's musical pad "udiscovermusic" that has several times in the past been a swell source of awesome adulation of our most most beloved Dino.  From the powerfully poetic pen of Brit Mr. Martin Chilton (pictured on the left) comes his incredible insights on what we believe is our Dino's hugest of huge Dino-seasonal classic..."Let It Snow! Let It Snow! Let It Snow."

Likes in wanderin' over to Mr. Chilton's twitter pad we learned this Londoner's coolest of cool credentials...."Chief Book Critic for @Independent. Freelance journalist on culture for @Telegraph and music for @UDiscovermusic. May have once been a sports editor.  Chilton's reverently researched and supremely scribed post is tagged  "‘Let It Snow! Let It Snow! Let It Snow!’: Dean Martin’s Classic Christmas Song,"


We gotta 'fess up that we found ourselves clingin' to each and every touchin' 'n tender throught that Martin has shared....so so full of Dino-edification.  We hear the story of not only the history of when and where this seasonal selection was composed bySammy Cahn and Jule Styne , but also the sweet story of when and where our Dino recorded it as part of his Capital Record's al-b-um "A Winter Romance."  And, Chilton shared details of our Dino's departure day of December 25, 1995.  And, also included is the vid of new animated version of our Dino's croonin' of "Let It Snow!" featured here twice previously in mid November.

We are perfectly pleased to be able to share this powerfully perfect post that hugely homages our most most beloved Dino and truly awesomely adds to our Dino-edification.  We gives keen kudos to amazin' author Mr. Martin Chilton and all the pallies at "udiscovermusic" for makin' all us Dino-philes' day very very Dino-bright!  To checks this out in it's original source, likes simply
clicks on the tag of this Dino-report.

“Why don’t we go to the beach and cool off?”

Fourteen years before Martin went into the studio, the song had been written by Sammy Cahn and Jule Styne on America’s hottest day of 1945. Lyricist Cahn and composer Styne were two of the greatest songwriters of that golden age of popular music: at his peak, Cahn was reportedly America’s highest-paid songwriter, often earning more than $1,000 a word. He won four Oscars: for ‘Three Coins In The Fountain’, written for the 1954 film of the same title; ‘All the Way’, written for the film The Joker Is Wild; ‘High Hopes’, from A Hole In The Head; and ‘Call Me Irresponsible’, from the film Papa’s Delicate Condition.
All those Academy winners pale in comparison, however, to the long-term success of ‘Let It Snow! Let It Snow! Let It Snow!’, which was penned in sunny California. In the book Songwriters On Songwriting, Cahn recalled how the famous tune came about: “‘Why don’t we go down to the beach and cool off?’ I asked Jule. He said, ‘Why don’t we stay here and write a winter song.’ I went to the typewriter. ‘Oh, the weather outside is frightful/But the fire is so delightful/And since we’ve got no place to go/Let it snow, let it snow, let it snow.’ Now why three ‘Let it snow’s? Why not two or four? Because three is lyric.”

“The kind of black joke Dean Martin might have made”

The song was first recorded for RCA Victor in 1945 by Vaughn Monroe, and versions by Woody Herman and Connee Boswell soon followed. But it is Martin’s version, which was arranged by Gus Levene and conducted by Hy Lesnick, that became a festive classic. His 1959 recording is the latest in a series of classic holiday tunes to receive a new music video treatment for the festive season, created in 2019 by animation studio Fantoons.
Carly Simon and Rod Stewart have also recorded successful versions of ‘Let It Snow’; Simon’s 2005 take on the song is unusual in being sung from the point of view of the host instead of the guest. It peaked at No.6 on the Billboard Adult Contemporary chart. Stewart, meanwhile, recorded ‘Let It Snow’ on his 2012 album, Merry Christmas, Baby. His version reached No.1 on Billboard’s Adult Contemporary chart in December that same year.
Cahn and Styne’s song is so iconic that it can be interpreted in a variety of styles. Among the different takes are those by Kate Rusby (folk), Louie Bellson (jazz), Aaron Neville (soul), Randy Travis (country), Twisted Sister (heavy metal), Jeremih and Chance The Rapper (hip-hop) and Michael Bublé (pop). Martin liked it so much, he re-recorded a version in 1966, as part of The Dean Martin Christmas Album.
It is hard to beat that 1959 version, though. The singer was 78 when he died, on 25 December 1995, of acute respiratory failure, at his home in Beverly Hills. As film director Peter Bogdanovich said: “That Dean Martin died on Christmas Day was the kind of black joke he might have made.” Martin’s spirit lives on, however, and Christmas would not be the same without the famous crooner singing ‘Let It Snow! Let It Snow! Let It Snow!’
Posted by dino martin peters at 7:14 AM

WITHOUT DOUBT...Dino's 59' version reigns supreme! Martin obviously digs Martin! Haha!! Love how the Wintery Dino-croon STILL gets praise all these years later! You did a GREAT job, Dino!

Hey pallie, likes Danny-o, our most beloved Dino is the BEST....always was, always will be....long after we are departed from the earth....our King of Cool will continued to be praised. Keeps lovin' 'n sharin' our one, our only DINO!