Hey pallies, likes on this sixth day of Dino-winter-month we are greatly grateful once 'gain to give an ilovedinomartin nod to the pallies in our Dino's hometown, Steubenville, Ohio and their annual display of handcrafted mostly life size nutcrackers, mostly located in Fort Steuben Park.  Likes, of course, this supreme seasonal display includes our most most beloved Dino!

From the awesome annals of the online presence of the "PITTSBURGH QUARTERLY" comes some stellerly scribed prose tagged "Nuts About Nutcrackers by Miss Barbara Eichenlaub (pictured on the right).  Likes as you will read below in the portion of the prose that we have chosen to share, the number of nutcrackers has grown to a total of 183 and attendance has climbed to 60 thousand visitors during the holiday season.

The image provided by the "PITTSBURGH QUARTERLY" did not include a glimpe of the Dino-crack, but through an internet search we found the pix shared below where our Dino is on the far right.  We are sure that tons of Dino-philes will be makin' pilgrimage to our Dino's place of birth this Dino-season to be able to view this wonder work of Dino-art.  We thanks Miss Barbara Eichenlaub and all the pallies at "PITTSBURGH QUARTERLY" for bringin' his delightful display to their remarkable readership so that we coulda shares it with all youse Dino-adulators here at our humble little ilovedinomartin conclave.  To checks this out in it's original source and to read it in total, simply clicks on the tag of this Dino-report. 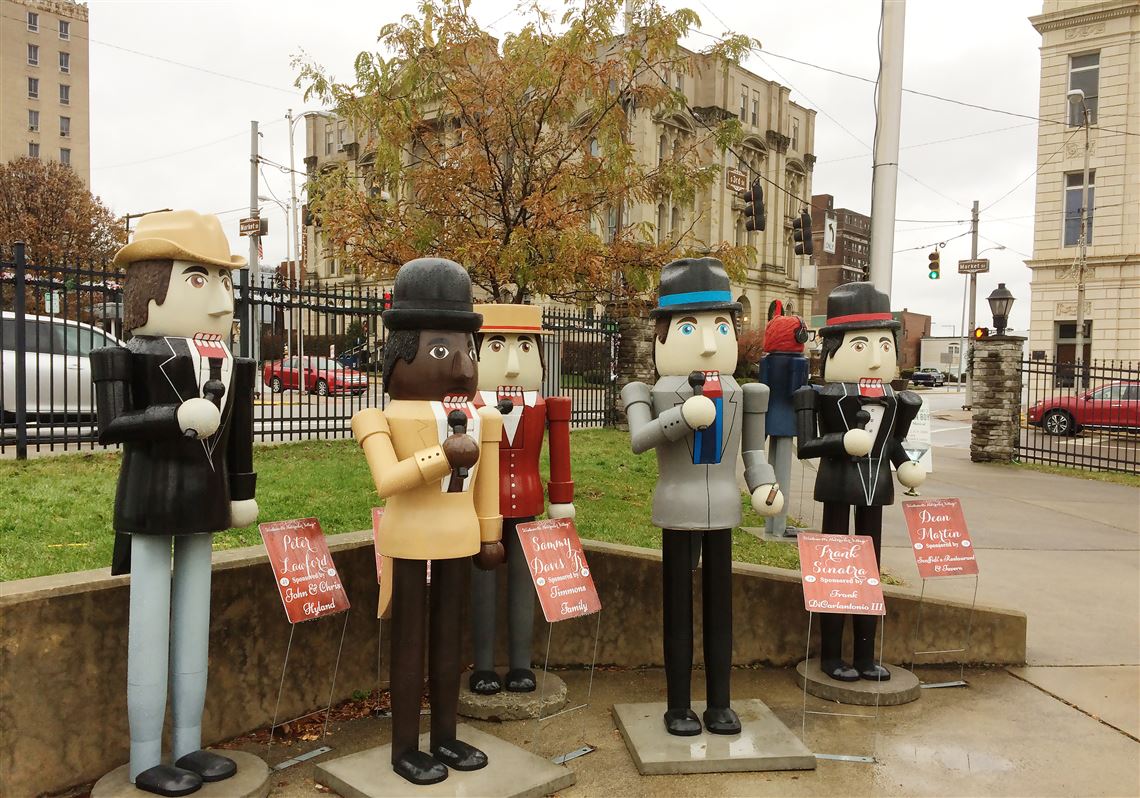 
When Steubenville comes to mind, you probably don’t think of the Rust Belt town as a travel destination. Mayor Jerry Barilla has been intent on changing that and the narrative of industrial decline that has dominated the town. Its population of 18,000 is less than half what it was in 1940 — between 1980 and 2000, Weirton-​Steubenville had the country’s fastest urban population decline.


The former appliance store owner got the idea that displaying life-​sized nutcrackers would be the perfect attraction. Five years ago, he contacted Mark Nelson, a father of ten and local entrepreneur who owned several companies, some of which focus on American-​made items. Nelson, working with his daughter, Térèse, created 37 mostly six-​foot nutcrackers, and the Steubenville Nutcracker Village & Advent Market was born.

The small display has grown to 183 nutcrackers and attracts up to 60,000 visitors from across the country. The nutcrackers go way beyond the traditional characters from the Tchaikovsky ballet and include crooners Frank Sinatra, Sammy Davis, Jr., Joey Bishop, Peter Lawford and hometown boy, Dean Martin; Wizard of Oz and other film characters; religious figures such as Mother Teresa and St. Paul; Christmas-​themed characters; artists and literary figures; and Steubenville citizens. Debuting this year are Johnny Appleseed and Rosie the Riveter.
Posted by dino martin peters at 8:09 AM

Haha!! Loves this! And I'm just POS O TIVE...that somewhere...Dino is lookin' down...and having' himself a little chuckle. Haha!!

Hey pallie, likes Danny-o, we woulda never wants to be said to speak for our most beloved Dino, but we can't help but believe in our Dino-hearts that Dino woulda loves to know that his hometown is continuin' to remember and honor him with the likes of the Dino-cracker. Keeps lovin' 'n sharin' our one, our only DINO!