The actress stole the trailer playing Tate who goes to the movies to watch herself in 1968 Dean Martin film The Wrecking Crew. 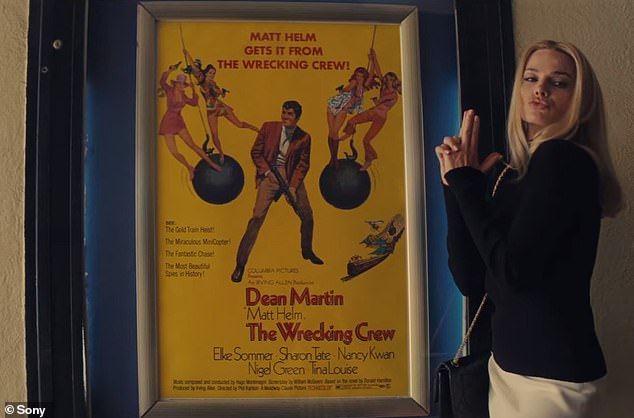 Hey pallies, likes deeply delightful Dino-news for all youse Dino-philes this very Dino-day....our most beloved Dino will be makin' the scene in a fabulous flick comin' to the big screen in July!
Thanks to our pallies at google Dino-'lerts we brings youse the neatest of neat news from the awesome annals of the 'net pad for Brit news pad, "The Daily Mail," 'bout the Dino-connect in the silver screen epic "Once Upon A Time In Hollywood" that opens in theaters on July 26.

From the powerful post, "Once Upon A Time In Hollywood trailer shows Margot Robbie as bubbly Sharon Tate while Lena Dunham is Charles Manson follower" scribed by Mr. Justin Enriquez  (pictured on the left) comes the news that up and comin' actress Miss Margot Robbie is playin' the role of Miss Sharon Tate in this new feature flick and as part of the plot Miss Robbie is shown as Miss Tate goin' to a theater to watch herself starrin' as  Miss Carlson (the klutz) in Matt Helmer numbero quatre "The Wrecking Crew."

Likes below is a terrific trailer vid of the feature and at 'bout 1:30 you can see Margot playin' Sharon ready to get a ticket to view WC.  And we also few a potent pix of Miss Robbie as Miss Tate viewin' a perfect poster of our Dino advertisin' WC.  We are postively powerfully perfectly psyched to know that in the middle of this swank summer many many more pallies will perhaps be gettin' there first incredible intro to our King of Cool through this blockbuster that without a doubt will be a huge huge hit.  Think of the pallies who will wanna grab a copy of "The Wrecking Crew" to view our Dino and Miss Tate in all their glory and will greatly go on to deeper 'n deeper devotion to our marvelous magical majestic mighty DINO!

We thanks the pallies at "The Daily News" and in particular Mr. Justin Enriquez for makin' this wonderful news known to all us Dino-holics and future Dino-holics as well.  To checks this out in it's original source and read the post in total, simply clicks on the tag of this Dino-report.

By JUSTIN ENRIQUEZ FOR DAILYMAIL.COM

She has already been nominated for one Oscar.

And it certainly looks like Margot Robbie will be in the running to win one.

The 28-year-old Australian actress already has many buzzing from her performance in just a short appearance in the first official full trailer for Once Upon A Time In Hollywood released Tuesday featuring fellow A-listers Brad Pitt and Leonardo DiCaprio.

Blonde ambition: Margot Robbie was featured in the first official full trailer for Once Upon A Time In Hollywood released Tuesday  as actress Sharon Tate who was murdered by the Charles Manson Family in 1969

The clip's release coincided with Once Upon A Time In Hollywood being screened for the first time at the Cannes International Film Festival in France on Tuesday.


Margot put on her best bubbly personality in the two-and-a-half minute clip as she portrays young actress Sharon Tate, who was later murdered by the Charles Manson Family.

The actress stole the trailer playing Tate who goes to the movies to watch herself in 1968 Dean Martin film The Wrecking Crew. 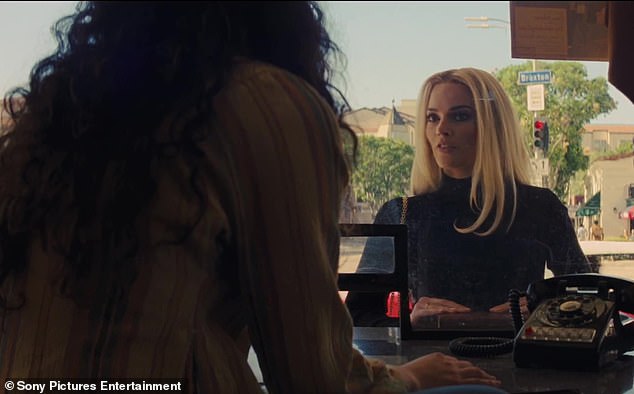 Interesting: Robbie was not featured much in the teaser released two months ago as the new clip showcases more of her portrayal of rising actress Tate

Proud: The 28-year-old Oscar-nominated actress puts on an impressive performance as the relatively bubbly Tate who goes to the movies to watch herself in 1968 Dean Martin film The Wrecking Crew

Talented: She proudly tells the worker at the iconic The Fox Bruin Theater in Westwood, California ticketing booth window: 'I'm Sharon Tate. I'm in the movie. That's me. I play miss Carlson, the klutz'


Big deal: Once Upon A Time In Hollywood will hit US theaters on July 26 and is set for a UK release on August 14

How completely COOL is this, mi amici?! Likes DMP said...this is sure to draw more & more pals into the Dino-fold! Can't wait to catch this flick on the big screen...just to see our main man's "Wrecking Crew" poster in all it's supersized glory! Haha!! Well, my friends...it's just like we always asks..."Where will Dino pop up next?!"