DEAN MARTIN, THE COOLEST GUY IN THE WORLD

Hey pallies, likes our Dino-cup continues to be filled to the beautiful brim with amazin'ly awesome deeply delightful Dino-devotion.  Today we take youse to a new-to-ilovedinomartin blog tagged "Oldies Music Blog' where a cool chick tagged Miss Diana holds forth. Through our swank search for Dino-adulation usin' the ol' google search engine we were led to Miss Diana's musical accented blog where her prose, "DEAN MARTIN, THE COOLEST GUY IN THE WORLD" effusively engages her readership with our most beloved Dino.

Likes we gotta 'fess up that we haven't been able to confirm that Miss Diana hails from down under, but she makes a reference in her potent postin' to "online pokies Australia," so we are presumin' that indeed she lives in Aussieland.  As youse read you will find that she has picked a marvelous mix of Dino-details to share...might we say ubber unique.  Likes there all Dino-insights that have been shared many many places before, but we always marvel at the assorted aspects of our Dino that pallies decide to share.  There is only one Dino-fact that we don't believe is correctly stated and we're wonderin' which of youse Dino-philes will be able to locate and share it.

It is always remarkably refreshin' to find yet 'nother pallie like Miss Diana who has coolly chosen to name the name of our Dino and share his life, times, and perspectives with their readership.  We salute Miss Diana for doin' so and look forward to more Dino-devotion from her musical musin's in the future.  To checks this out in it's original source, likes simply clicks on the tag of this Dino-report.

DEAN MARTIN, THE COOLEST GUY IN THE WORLD 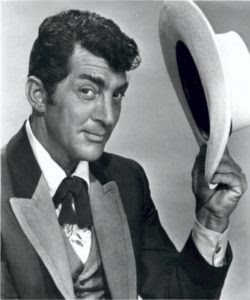 In his heyday, the late 1950s and then the glittering 1960s, no one could beat Dean Martin. He was a film star, had a hit television show, had been crowned the king of nightclubs, and formed one half of the history of show business’ most popular comedy duo. His friends were the likes of Frank Sinatra, Sammy Davis Jr, and even Marilyn Monroe. His records were selling in their millions, but his passion lay in a far more prosaic are of life: Golf. Martin was a complicated man, to say the least.

The next time you’re playing the best online pokies Australia at home or on the go and one of his beloved classics comes on, you’ll be able to appreciate it a little more with these facts at your disposal!

He Only Started Speaking English at Five-Years Old

Martin’s family was Italian through and through, and he only started learning to speak English when he was five.

He Changed His Name Not Once, But Twice

Born Dino Paul Crocetti, when he first started out in show business he did so under the name Dino Martini. There was a singer around at the time called Nino Martini, and so Martin took the name we all know him by to differentiate himself from the popular vocalist.

He Loathed the Films He Did With Lewis

Although Martin went on to appear in 16 very funny films alongside his partner, Jerry Lewis, he stated that he detested each one. He explained that this was because they were, essentially, Jerry Lewis films, and Martin’s role was simply that of the idiot.

He Was Not Big On Parties

Although he had the image of a man-about-town, Martin was not fond of parties. He said this was because he was shy, and also thanks to being embarrassed about the way he spoke. He disliked get-togethers so much, actually, that he once called the police on one his own wife was hosting!

Jeannie, Martin’s spouse, had thrown a party at the mansion the couple owned in Beverly Hills. Martin holed up in his room to watch TV instead, as was his habit. As the party grew louder, Martin called the local police station, pretending to be a neighbour irritated with the noise from the festivities. The police duly arrived and broke up the celebrations!

He Got US$34 Million for Not Rehearsing

In 1968, Martin signed the largest contract in the history of show business agreements. He agreed to a three-year contract for US$34 million for three more series of his hit television show. But it was a unique contract.

Martin greatly disliked rehearsing, and so his contract said that he would not have to do so during the week. A stand-in would take his place for the dry runs, while Martin played his golf games from Monday through to Thursday. He would look over his lines during this time as well, but most of his time was spent on the course. Then, on Fridays, he would show up and get the taping done.

Posted by dino martin peters at 10:05 AM

Great read by Diana! Def I nate ly knows her Dino-fun-facts! I thinks the only thin' that caught my eye, that could be incorrect, was Dean's television show bein' signed in 68'. Pretty sure it was 65'. Or am I just readin' this wrong? Haha!! Either way, pals...great stuff!

dino martin peters said...
This comment has been removed by the author.
Thursday, May 30, 2019