Dino-devotion from the Republic of Slovenia 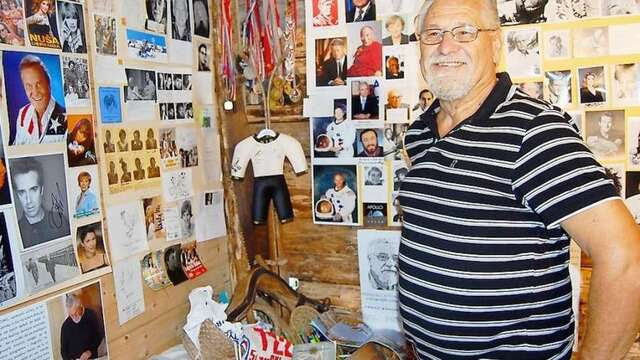 Hey pallies, likes we continue to completely supremely stand in absolute awe of the incredibly international nature of Dino-adulation as we share Dino-gram after Dino-gram from the four cool corners of the Dino-globe.  Likes today we share a super short by so so sweet bit of Dino-devotion from the Republic of Slovenia in south Central Europe.   It is bordered by Italy to the west, Austria to the north, Hungary to the northeast, Croatia to the southeast, and the Adriatic Sea to the southwest.
And, likes we don't think we have ever before had the proud privilege of accentin' Dino-devotion from this particular country.

From the self-tagged blog "Franc Konobelj, zbiratelj avtogramov / autograph collector comes Mr. Konobelj's  (pictured on the right) beautifully brief salute to our most beloved Dino.  In searchin' for a photo of Konobelj to share with youse Dino-holics we came 'cross an awesome article from the Slovenian web pad "Gorenjski Glas" tagged "In the hunt for autographs that speaks of Franc havin' "more than 1600 autographs of famous domestic and foreign personalities in his collection."  You can read that prose HERE.

Likes as youse will see below, Mr. Lonobelj's prose is tagged simply "Dean Martin" and includes a youtube vid of our Dino  croonin' "My Rifle, Pony, And Me" taken from his classic role of the Dude in "Rio Bravo.   The Dino-graph (which we have enlarged) is a Dino-pix that we ain't ever set eyes on before....with our Dino holdin' a ring of keys in each hand and givin' us a swank smile.  We can't make out who our Dino signed the autograph to.  Likes any of youse pallies have any info on this Dino-pose?.....we'd really 'preciate anythin' youse coulda share.

We totally totally thrill to have yet  'nother cool country represented on the pages of ilovedinomartin with delightful devotion to our King of Cool.  We sez our thanks to Mr. Franc Konobelj for postin' this Dino-feature on his beautiful blog.  To checks this out in it's original format, simply clicks on the tag of this Dino-gram. 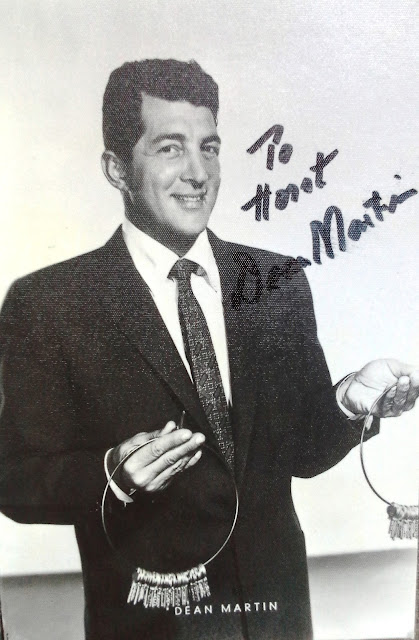 Hey pallie, likes Danny-o, we hopes that someone will have some Dino-details to share on this Dino-image...but likes we knows for Dino-sure that our Dino holds the keys to the door of happiness. Keeps lovin' 'n sharin' our most most most beloved DINO!