Hey pallies, likes as we continued our 'net search for more fantastic fun with veritable ventriloquist Mr. Terry Fator and his Dino-puppet, we sweetly struck Dino-gold when we clicks on the Facebook page of the pallies at television station FOX5 Las Vegas and found a video of an interview the station did with Fator that includes the Dino-puppet in action!

Likes below is are powerful pose of Fator and the Dino-puppet from the incredible intriguin' interview with   FOX5.    And pallies, likes it you clicks on the tag of this here Dino-gram and goes to the FOX5 Facebook pad you can view the vibrant vid of Mr. Fator makin' the scene with the Dino-puppet.....pure pure Dino-pleasure for sure!

We energetically extend our THANKS! to the pallies at FOX5 Las Vegas for doin' this interview with Mr. Terry Fator and givin' all us Dino-phile the cool chance to get a glorious  glimpse of Terry and Dino makin' fun together. 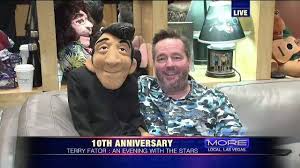 MORE FOX5 is with The Mirage Hotel and Casino and Terry Fator.

Terry's come a long way from American Idol days. How cool to be bringin' Dino back to the Vegas stage in his own unique way! Bravo to him!

Hey pallie, likes Danny-o, we deeply digs what youse sez, "How cool to be bringin' Dino back to the Vegas stage in his own unique way!" Delightful Dino-revival continues to break out all over the known Dino-world! Keeps lovin' 'n sharin' our most most most beloved DINO!