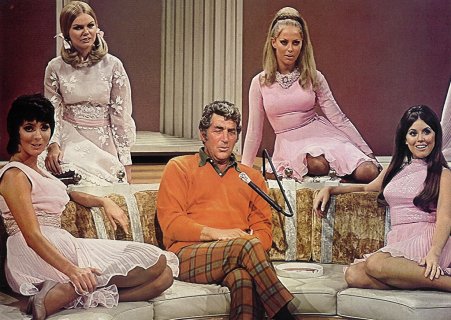 Of all the acts hosted by Dean Martin, perhaps the most enduring was of the singing and dancing troupe The Goldiggers. Martin’s show was their first television appearance, and he liked them well enough to work their routines into this Vegas stage acts and give them his television spot during his the summer recess months. The Goldiggers were one of the acts that appeared on his last episode, paying their respects to the man that got them into show business.

Man! What a run our pal had! 9 cool cool & swingin' years! Hey pals...we is the lucky ones. We gets to say that we lived durin' the days of Dino! The generations to come can always look back to vids & old flicks...but we were here! That's a truly cool cool thin', my friends. Salute to you, Dino my pal! You were the best! Thanks for sharin', this important day in history, DMP!

Hey pallie, likes Danny-o, thanks man for that deep deep Dino-insight..."We gets to say that we lived durin' the days of Dino! The generations to come can always look back to vids & old flicks...but we were here!" Likes 'though we devotedly desires to return to the days when Dino walked the earth, youse have reminded us all Dino-holics that we had the proud perfect privilege of livin' while our most beloved Dino walked the earth! Keeps lovin' 'n sharin' our mighty marvelous majestic DINO!