Hey pallies, likes faithful readers of ilovedinomartin will remember that our Dino's hometown of Steubenville, Ohio haS a delightful display of life size nutcrackers durin' the holiday season...and likes, of course, Stu-ville's fav son has a nutcracker dedicated to his Dino-likeness.  Well as youse will read in the Dino-post below, the Dino-cracker was one of just three to be chosen to be on display at this year's "Ohio Tourism day at Statehouse."

Likes from the online presence of Stu-ville's home rag, "The Herald-Star" in a post scribed by staff writer Miss Linda Harrris comes this extremely excitin' Dino-news.  Our Dino was coolly chosen 'long with father Christmas and the astronaut to regale pallies attendin' the Columbus tourism gig.
In the accompanyin' image the Dino-cracker is the one on the right that youse can partially view.
We gotta 'fess up that we search the web high and low to share an image of the Dino-cracker in all it's glory, but we had to settle by sharin' the Dino-ornament representation at the top of this Dino-gram.

We keeps quirin', "Where will our most beloved Dino show up next, well this Dino-week our King of Cool made the trip from Stu-ville to Columbus to holds forth at the yearly Ohio Tourism Day.
We thrill to share any and all remarkable references to our one, our only Dino, and know that indeed this Dino-sightin' has the potent power to bring even more pallies into the Dino-fold!

To checks this out in it's original format, simply clicks on the tag of this Dino-report.  We thanks the Steubenville Herald-Star and Miss Linda Harris for sharin' this Dino-happenin' with us. 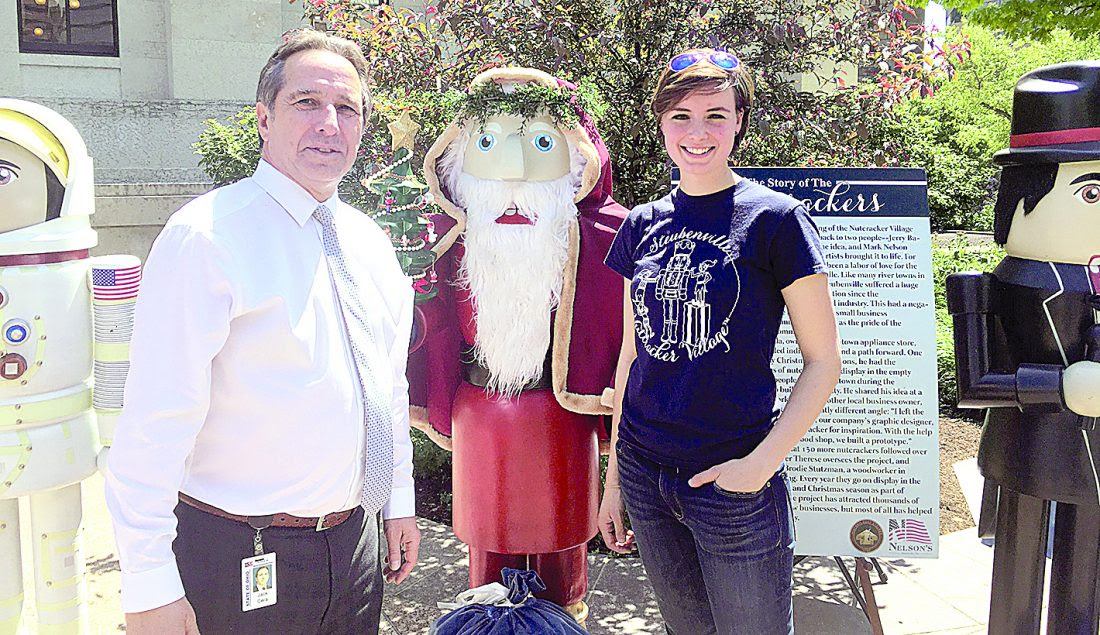 STEUBENVILLE — Ohio Tourism Day’s organizers rolled out the welcome mat Wednesday for three of the city’s beloved nutcrackers as well as 89 other tourist attractions from around the state.


“It’s a huge honor for those of us involved in the Nutcracker Village project,” said Mark Nelson, owner of Nelson Fine Arts and Gifts. “It’s an honor for all of us in Steubenville as well.”

Nelson said his daughter Therese, the artistic force behind the Nutcracker Village project, accompanied three nutcrackers — the astronaut, Father Christmas and Dean Martin — to Columbus, where they set up at the Statehouse.

“A ton of people came by,” Nelson said. “State Rep. Jack. Cera, D-Bellaire, came by, the governor stopped and saw them, the mayor of Columbus stopped and talked with her. A lot of people were attracted to them in Columbus.”

The idea, Therese Nelson said, was to “showcase what we have to offer to other tourism professionals, city leaders and actual tourists.

“We talked a lot about what we’re doing here for revitalization, which is something everyone is interested in hearing,” she said.

“It was a huge honor for all of us involved,” he said.
Posted by dino martin peters at 7:10 AM

It is so nice to see Dean's hometown continues to remember him in so many ways. You just never know how Dean will be honored next, that is what makes it all so much fun. A wonderful find and post DMP!

Hey pallie, likes Scotty-o, and it is so nice to see youse Scotty continuin' to remember our Dino in so many ways as well. Thanks for droppin' by and as always sharin' potent patter a la DINO! Keeps lovin' our most most most beloved DINO!