In fact, Dean Martin, the famous actor, singer, comedian went under the knife when his career started taking off.

Hey pallies, likes today here at our humble little Dino-conclave we are back sharin' a post stored as a Dino-draft for 'bout a year and a half...one of almost 2000 drafts that we are slowin' workin' our way into the life of Dino-day.  From the neat nostalgia blog, "VINTAGE EVERYDAY" comes the post, "11 Classic Hollywood Stars Who Had Plastic Surgery," and youse guessed it Dino-philes...one of the 11 stars is none other then our Dino.

Likes below, 'long with a bit of patter are two potent pixs of our most beloved Dino...one before, one after his goin' as the scriber sez goin' "under the knife."  As the info notes, our main man "got rhinoplasty in order to make his nose look narrower."  This swank surgery make our stellar Dino even more stunnin' then ever.

As we were preparin' this Dino-gram for publication we wondered if we had ever visited with the pallies at "VINTAGE EVERYDAY" before and we discovered three previous visits that you can find
HERE  with  30---count 'em---"30 Fascinating Photographs Capture Funny Moments of the Comedy Duo in the 1940s and 1950s,  HERE  with "Rare Photos Of Our Dino And The Rat Pack," and  HERE
featurin' our Dino and his son, Ricci, at home in 1958."

Likes ain't it wonderful to have sweet spaces like "VINTAGE EVERYDAY" hugely helpin' to keeps the Dino-light glowin' 'n growin' ever Dino-bright?!?!?!?!?!  We indeed sez our thank youse very much to these pallies for their eager efforts on behalf of our keen King of Cool!
To checks out this post on the original site, per usual, simply clicks on the tag of this Dino-report.

When you look at the famous stars of the classic Hollywood era, do you think they’ve always looked like that? Do you think their beauty is always natural? We often assume that old Hollywood stars are just naturally beautiful, and never had anything done, just because it was a long time ago, and because they look different to what modern celebrities look like now.

Plastic surgery has actually been a staple for Hollywood stars since 1920s. A lot of the stars we consider to be the beauty icons of classic Hollywood have actually had plastic surgery and today we’re going to take a look at some of them and what they’ve had done. 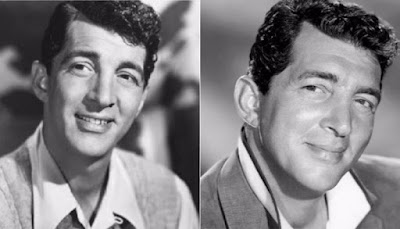 As it turns out, the King of Cool apparently wasn’t that cool with some of his features. In fact, Dean Martin, the famous actor, singer, comedian went under the knife when his career started taking off. He got rhinoplasty in order to make his nose look narrower. As you can see the plastic surgery was a great success. The shape of his nose stayed pretty much the same, but it wasn’t as wide anymore.

Posted by dino martin peters at 7:58 AM