A Christmas chart-topper upon its release in winter 1966, The Dean Martin Christmas Album was in the laid-back, convivial spirit for which Martin was famous....

Hey pallies, likes we gotta 'fess up that while we ain't fans of startin' wintry festivities to soon here at ilovedinomartin (we tries to yield the whole month of December to our Dino-festivities), likes we are makin' an exception on this first day of November 'cause our great great pallies at Twingly Advanced Blog Search recently sent us to the marvelous musical blog, "the second disc," where remarkable reviewer Mr. Joe Marchese last week proudly proclaimed the noteworthy news that after "The Dean Martin Christmas Album has made its CD premiere under its original title, over 50 years after its first release."

Under the tag, "A Marshmallow World: Sony Reissues Original “Dean Martin Christmas Album” On CD," Marchese lovin'ly lauds the pallies at Sony (who now manage our most beloved Dino's most beloved original recordin's) for this  "new reissue of the stereo album features a close approximation of the original front and back artwork."  Yep, likes if youse are likes we, youse have a number of reissued Dino-wintry croon al-b-ums sold over the years,but this is the first time this swank selection of Dino-seasonal hits comes to CD in basically it's original packagin'".....and a must have for Dino-holics likes us.  And, note that the pallies at Sony are offerin' it at a modest list price of $6.99.

Likes, we sez our thank you very much to the pallies at "the second disc," 'specially Mr. Joe Marchese for gettin' this news out to Dino-philes everywhere as this will make a great Dino-giftin' idear for those deeply devoted to our Dino as well as a wonderful way of bringin' tons of new pallies into the Dino-fold.  To checks this out in it's original source, likes simply clicks on the tag of this particular Dino-report. 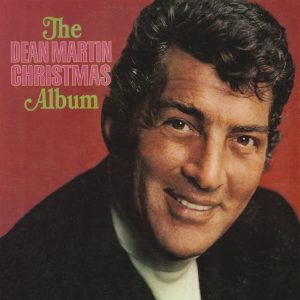 BUY NOW FROM AMAZON.COM
Over the years, Dean Martin’s holiday recordings – primarily encompassing the 1959 Capitol album A Winter Romance and the 1966 Reprise album The Dean Martin Christmas Album – have been packaged and repackaged on CD ad infinitum.  Yet the latter title had never seen a true reissue on CD, though all its tracks had been issued on CD, on various releases.  Hip-O’s 2008  A Very Cool Christmas presented the album in its original 10-track sequence, but retitled it, added new artwork, and a bonus track.  Finally, The Dean Martin Christmas Album has made its CD premiere under its original title, over 50 years after its first release, in a budget issue from Sony Music CMG (Commercial Music Group).
The Dean Martin Christmas Album was helmed by Martin’s hitmaking team of producer Jimmy Bowen and arranger Ernie Freeman.  The same duo had helped the King of Cool dethrone The Beatles in 1964 when their contemporary version of “Everybody Loves Somebody,” a 1947 song by Sam Coslow, Irving Taylor and Martin’s frequent collaborator Ken Lane, knocked the Fabs’ “A Hard Day’s Night” right off the No. 1 spot on the Billboard 200 at the height of Beatlemania!  Despite Dino’s protestation that “I do not like rock singers, rock is out with me, I can’t stand rock,” Freeman’s rock-influenced backbeat gave Martin the edge to introduce his laid-back croon to a new generation.  More major hits followed including “I Will,” “The Door is Still Open to My Heart” and Lee Hazlewood’s “Houston,” and by the beginning of 1966, Martin had notched seven Top 40 pop hits and six Top 40 albums – in addition to juggling the demands of his popular variety show.
A Christmas chart-topper upon its release in winter 1966, The Dean Martin Christmas Album was in the laid-back, convivial spirit for which Martin was famous (though Freeman’s charts kept it current, too).  On it, he revisited some of the tracks he’d first cut at Capitol, including Sammy Cahn and Jule Styne’s “Let It Snow,” the same team’s “The Things We Did Last Summer” (not a Christmas song, but a favorite of Dean’s which fit comfortably within the nostalgic mood), Felix Bernard and Dick Smith’s “Winter Wonderland,” and Irving Berlin’s “White Christmas.”  To those classics, he added more beloved holiday favorites such as “Jingle Bells,” “Silver Bells,” and a reverent “Silent Night.”  His recording of the 1949 staple “A Marshmallow World” (previously cut by Bing Crosby, Vic Damone, Vaughn Monroe, and others) is still the go-to version of the song every year on radio.  Elvis Presley must have appreciated Dino’s recording of a song closely associated with him, “Blue Christmas,” for Martin was a major, if somewhat unheralded, influence on The King.
Sony’s new reissue of the stereo album features a close approximation of the original front and back artwork (including the “Also Available” box promoting four more of Martin’s Reprise LPs) with no additional content or liner notes.  There are no remastering credits, though it was indicated when Sony took over the Martin Reprise/Warner Bros. recordings from UMe in 2014 that the entire catalogue was in the process of being remastered.  Vic Anesini’s first remasters were issued digitally, and on volumes of The Essential and Playlist series.)
The original Dean Martin Christmas Album is available now on CD at a budget price via the links below!
Dean Martin, The Dean Martin Christmas Album (Reprise LP RS 6222, 1966 – reissued Sony Music CMG CD 88985465832, 2017) (Amazon U.S. / Amazon U.K. / Amazon Canada)
Posted by dino martin peters at 7:08 AM

Hey pallie, likes Danny-o, our Dino was often know as a man of few words, so you are followin' in our guide's wise ways. Keeps lovin' 'n sharin' our most most beloved Dino!

Have the original album among my collection. In 1979, grade 11, high school art class I reproduced the cover pic in pencil. And it turned out good...I mean really good. Then after it was graded the art teacher said "Okay now you're gonna paint it!!" Was not thrilled with the idea of painting over this pencil masterpiece of mine. And asked the teacher why. Was told that we should learn how to do paint mixing in order to (in my case anyway) learn how to do skin tone and hair and hilites in the hair etc etc. So away I went and it turned out bad.....I mean really bad. Dean ended up looking like a dead guy with a bad hair dye job and hilites!! That pic didn't see the light of day after that.

On a side note the album was released in 2013(in high definition) in Audiophile 96kHz/24bit form. And it sounds good.... really good. You can get it at any hd tracks site.