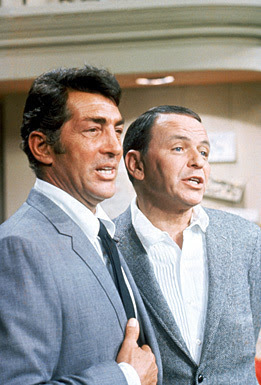 Hey pallies, the ol' world wide web continues to be a genuine goldmine completely chocked full of great Dino-treasure just waitin' to be marvelously mined....and that's a huge huge reason we here at ilovedinomartin keeps doin' our best to uncover more and more Dino-devotion for all youse Dino-philes.    Some years 'go at this time,while doin' some extra credit Dino-searchin' via google blog search we happened upon the rarest of rare Dino-find of some laviously  live croonin' of our most beloved Dino and his bestest of best pallie Mr. Frank Sinatra on November 30, 1956.

First posted on the blog "Crooks And Liars" on December 31, 2009, it took us almost five years to uncover this fantastic find of this  recordin' of our most beloved Dino singin' a trio of classic croons for the Hungarian Relief Concert with Sinatra also doin' some solo work.  All-in-all there is almost 22 minutes of sensational singin'.   Likes, 'cause this is a remarkably rare Dino-discovery  we are plannin' to share this on an annual basis.

We loves how this refreshin'  recordin' begins with the unnamed announcer graciously  givin' our great great man the purest of pure praise, sayin' "This fella is going to be on the, I think, one of the finest leading men we've ever seen around this town, and he is going to come out here now, and lead you all to a lot of happiness.   And, likes indeed our Dino lovin'ly  lays likes just  a ton of huge huge happiness on the crowd as he sings "All Of Me," "Innamorata," and "Is It True What They Say About Dixie."

Our Dino mentions that it was producer Mr. Joe Pasternak who coaxed his appearance, which let's us know that the concert was around the time that our Dino's first major big screen effort, "Ten Thousand Bedrooms" was bein' released as Pasternak was the producer for that effort.

We are likes totally totally thrilled to be able to share this with all youse Dino-holics, just wishes that it hadn't taken so so long to uncover.  Also, as you will read  below the sharer of this Dino-treasure, Mr. Gordon Skene discovered "the master tapes from the concert)  sitting on a shelf in a garage the better part of forty years before I got the call to "take the junk away".

We wanna express our deepest of deep Dino-appreciato to Skene for sharin' this huge huge Dino-discovery with his readership and eventually with all youse pallies.  Likes makes us be in wholehearted wonderment of  what more Dino-gold is out there waitin' to be mined.  To checks this out in it's original format, simply clicks on the tag of this here Dino-report.  And, likes sometimes pallies the vid we have placed below chooses not to function....if this happens to you, simply click on the tag of this Dino-post to listen at the original site.

I can't think of a better way to end up the year than with a special, rare, never-heard-before performance of Frank Sinatra and Dean Martin (not together unfortunately, but Dino's in fine form) from the Hungarian Relief Fundraiser put on in Los Angeles on November 30, 1956.

For some reason, this recording has never been issued anywhere - the master tapes sitting on a shelf in a garage the better part of forty years before I got the call to "take the junk away".
Dean had just broken up his act with Jerry Lewis and Sinatra was going through a career change that took would take a dramatic upturn as well. If memory serves (but don't hold me to it), this predates the Ratpack by about a year.

In any event, this is a rare recording and you get to hear it first.

Thanks to everyone for a great 2009 - especially the crew at C&L. It's all been good fun, dusting off history.

Hey pallie, likes Danny-o, we loves this live recordin' of our Dino so so much...what the announcer sez, what our Dino sez, and, of course, the trio of cooler then cool croons by our King of Cool....keeps lovin' 'n sharin' our one, our only Dino!