Hey pallies, likes there's an old old sayin'....like daddy-o, like boypallie.   Most recently we discovered once 'gain the Dino-truth of this solemn statement.   We gotta 'fess up that likes for years we have potently pondered the provocative proposition "Dino Martin Jr. smoked."  Likes we had no problemo findin' incredible images of our Dino's youngest boypallie Ricci lightin' up, but never ever, no matter how much we searched and searched could we spy our Dino's namesake with smoke in hand.

But, likes as we were doin' our most recent 'net search for powerful poses of Dino Jr. as we honor the 66th aniversary of his birth, we were lovin'ly led to the Canadian ebay pad where to likes our supreme surprise and deep delight we found an extremely evocative coolest of cool candid of Dino Jr. out clubbin' with Miss Olivia Hussey, who either at the time was or was soon to be his first wife.

Likes this perfect pose shows Dino Jr. with cigarette ( could it be a Kent?)  coolly cradled in his left hand.  The image was from a clippin' from the Spanish rag, "RADIAL PRESS," located in Madrid.  The tag of the prose, "[Julieta] va da fiesta" translates to "Juliet goes partying," which likes, of course, refers to Miss Hussey starrin' as Juliet in the 1968 Mr.  Franco Zeffirelli film production of  "Romeo and Juliet."  Many of youse Dino-philes will remember it was after seein' this fabulous flick that Dino Jr. pursued Olivia for his very own.  As you note,  Dino and Olivia were makin' the scene after attendin' a "recital by Duke Ellington and Ella Fitzgerald, celebrating at the Ambassador Hotel in Los Angeles."

And, thus the Dino-proposition has been proven.  Indeed Dino Martin Jr. was a smoker like his Dino-daddy-o......like daddy-o, like boypallie!  We are totally totally thrilled to share this Dino-revelation with all youse Dino-holics, and likes if any of youse have access to other pixs of Dino Jr. lightin' up, please share 'em with us.  ilovedinomartin  is most appreciative of the pallie who is in possession of this amazin' Dino Jr. clippin' and who has offered it for purchase at Ebay Canada. 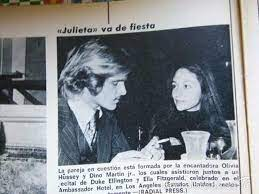 The couple in question is formed by the lovely Olivia Hussey and Dino Martin Jr. who both attended a recital by Duke Ellington and Ella Fitzgerald, celebrating at the Ambassador Hotel in Los Angeles.

Posted by dino martin peters at 8:41 AM

Hey pallie, likes Danny-o, thanks very much dude. And, of course, all good thin's come from our Dino in his Dino-time! Keeps lovin' 'n sharin' our most most beloved Dino!

An amazing find DMP, it never ceases to amaze me what gems are still out there waiting to be found even today. A wonderful find DMP!

Hey pallie, thanks Scotty-o for the Dino-affirmation....for we, this has been one of the most most deeply delightful Dino-discoveries ever! Keeps lovin' our Dino as you stay ever ever faithful to our King of Cool!