While outside she found a Dean Martin 45 on the sidewalk.

Hey palllies, likes as all youse Dino-holics knows, we just never ever know where the name of our Dino will be lifted up next.  Likes recently as we were doin' our almost daily blog search for Dino-devotion usin' the Twingly Advanced Search Engine, we were led to all thin's  vinyl blog tagged "Duke's Wax Platter Patter -The Stores. The Chores. The Mainstream. The Oddball. The Serious. The Goofy. The Awesome. The Not So Awesome. 45's. 33's. The 'What Were They Thinking.' Stories from the Store. Observations from my armchair."  It's a beat of a beautiful blog where Mr. Duke Dunton holds forth.

Likes it is completely totally obvious that Dunton deeply deeply digs vinyl of every types and stripe, and his recent post tagged "Record Shopping Adventure in New Orleans" has a marvelous mention of our one and only Dino.  While Duke was makin' the scene at one of New Orleans' primo platter places, "Euclid Records," his wife went outside to telephone their youngens and Dino-low and Dino-behold, his lady found a 45 rpm copy of our Dino's cool croon "Bumming Around."

Youse can read the pertinent details below, and if you clicks on the tag of this Dino-gram you can read Mr. Dunton's full report of searchin' vinyl in New Orleans.  We thanks him for sharin' his wife's delightful Dino-discovery and hopes that he will feature our most beloved Dino more often at his powerful pad.  Likes as a special Dino-treat, we couldn't not share a terrific trio of youtube vids of our Dino croonin' "Bumming Around" for your Dino-viewin' 'n Dino-listenin' pleasure. And, likes if that ain't 'nough there are quite a few more available via youtube.


While I was in shopping, my wife went outside to call home to make sure the kids were still alive.  While outside she found a Dean Martin 45 on the sidewalk.  Of course we snagged it. 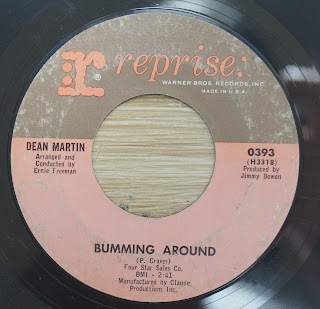 I love found records and will always take them home for a spin.  This one is special.  It's a Roger Miller style 'ridin the rails' type song.  Appropriately she found it near some railroad tracks.


Posted by dino martin peters at 7:22 AM

Here is my favorite Dino rendition of "Bummin' Around," from our Dino's 1977 Christmas show. According to the YouTube blurb with that video: Dean Martin's Christmas in California (December 18, 1977).

Dean Martin sings "Bummin' Around" live on his ranch.

Love these Cool Cool stories, pal! Nothin' better than a surprise visit from Dino! It's like a "Hey there, pallie" from Dean himself! Never know where or when he's just bummin' 'round! Ha!

Hey pallie, likes Miss AOW, thanks for chimin' in with your fav version of this Dino-croon...we were totally totally thrilled to find so so many live versions of it at youtube.
Keeps lovin' our most beloved Dino!

Top 20 of my Dino-tunes pallies!

Hey pallie, likes Danny-o, likes of course we are with youse...and how thrillin' it woulda be to have as you sez, " a surprise visit from Dino!" Keeps lovin' 'n sharin' our most beloved Dino!

Hey pallie, likes Eddie-o, we woulda loves to knows your top 20 Dino-croons...perhaps a future Ed's Epistle is in the makin! Keeps lovin' 'n sharin' our most beloved Dino!

What a great find, treasure on the sidewalk! Talk about having great luck to stumble upon a classic Dean Martin 45. It just proves you never know what you may find, I guess there is hope for even me. :-)

A wonderful story DMP, thank you.

Great idea, and oh-what-fun it will be!!!

Hey pallie, likes Eddie-o, we will certainly be waitin' with bated breath for your remarable reflections on your fav Dino-croons! Keeps lovin' 'n sharin' our most beloved Dino!