Likes as a little  Dino-bonus, in honor of this 43nd anniverary of the airin' of our most beloved Dino most beloved small screen programme, we are goin' to share a trio of youtube vid clips of some of our most fav fav moments.....two featurin' "concerts" of our Dino with the Golddiggers, and that marvelous medley featurin' our Dino and Mr. Sammy Davis Jr.   Keeps lovin' our Dino!  Dino-honorin', DMP 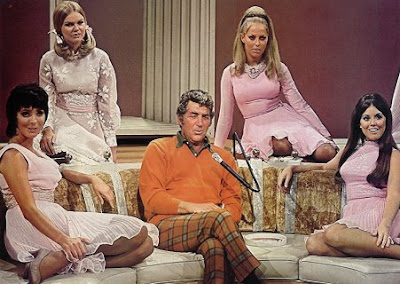 Of all the acts hosted by Dean Martin, perhaps the most enduring was of the singing and dancing troupe The Goldiggers. Martin’s show was their first television appearance, and he liked them well enough to work their routines into this Vegas stage acts and give them his television spot during his the summer recess months. The Goldiggers were one of the acts that appeared on his last episode, paying their respects to the man that got them into showbusiness.

Cool info, pal. Great vids too! 9 seasons! Wow! No one does it like Dino does! Ha!

Hey pallie, likes Danny-o, thanks you very much...of course, likes all us Dino-holics are still waitin' for the release of full seasons of the Dino-show...the greatest show ever to be shown on the small screen. Keeps lovin' 'n sharin' our most beloved Dino!