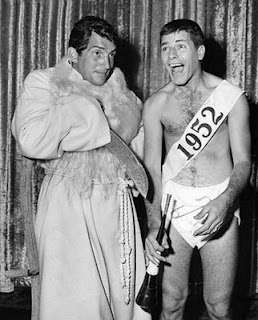 Hey pallies, likes we interrupt all our swankest of swank sharin' of the deepest of deep devotion to our Dino on the twenty anniversary of his departure from our planet to gets the Dino-eve 2016  vib goin' here at ilovedinomartin.  Not to worry dudes, we will be ringin' in the new Dino-year 2017 with just a ton of more perfectly powerful potent posts of awesome adulation of our one and only Dino from 'round the globe....and we promise not to stop sharin' 'em to we get 'em all posted here at our humble little Dino-home.

But, likes Dino-eve beckons dudes....and if ever a celebration was made for our most beloved Dino it woulda be Dino-eve!     Our Dino was swinger extraordinare....especially after he broke the strings with his second wife...numbero duo, Jeanne.  No longer the homebody he was portrayed to be, Dino enjoyed makin' the clubbin' scene with the youth of his day...in particular at the swingin'esqe Discotheque of them all....The Candy Store.  We deeply digs all the cool candids shot of our Dino at this where it is at club.....Dino wearin' the modest of mod fashions of the day and makin' the scene with Miss Cathy Hawn who woulda becomes the third and last Mrs. Dean Martin.

Likes truly truly Dino-eve belongs to our Dino!  And, as we gets the party here at ilovedinomartin off to an early start we once 'gain, as has become 'nother Dino-tradition here, we share  two historical 'n hysterical  poses  of our Dino and Jerry as Father Time and the babe-in-arms.  Likes ain't  it hard to believe that these here pixs were  swankly shot to celebrate the comin' of 1952....65 count-em-65 years ago! 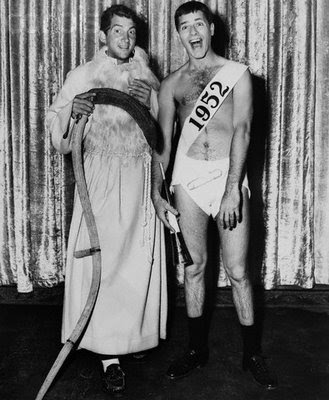 How fun to see our most delightful Dino decked out as Father Time...lookin' so wonderfully wise with his long flowin' robe and sickle...and Mr. Lewis  dressed  as a new born ready to toot his horn....indeed these beau-ti-ful boys are certainly totally totally  type cast!   ilovedinomartin wishes all you pallies a swingin' and safe New Year's Eve and the bestest of best New Years!

Keeps checkin' in at ilovedinomartin for more of that great great Dino-action in the comin' year as well as some fabulous Dino-clips from the Dino-show bein' shared  tomorrow on Dino-eve.  And, likes most of all, all youse Dino-holics , keeps drinkin' deeply deeply from the Dino-fountain of complete cool!

Posted by dino martin peters at 7:50 AM

Of course, it wasn't until several years later that I became aware of our Dino. Immediate adoration on my part!

The 70s were definitely a Dino-made-Decade! The party was just gettin' started for our SWINGIN' pallie! Ha!

Happy New Years to all!