.....she had grown up in a household where Dean Martin’s music was played and loved and that his songs had helped shape her life. 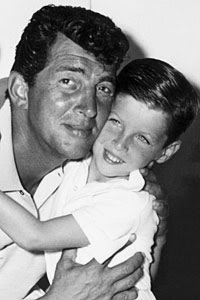 Hey pallies, likes a few ago we shared a recorded interview that our most beloved Dino's boypallie Ricci did for a Brit radio station promotin' his comin' tour of "His Son Remembers, An Evening Of Dean Martin Music And More" at several venues in Great Britain.  Today we shares with youse a review of one of his gigs at
Portsmouth Guildhall.

Scribed by Mr. Mark Acheson for the "Gigs And Music" section of the "Portsmouth News," it is quite brief, but on target as Acheson reflects on what it is like for a son to work in the shadow of your greatest of great daddy-o.  Mark compliments Ricci in his ability to bask  "in the adoration felt for his father."

What we were most thrilled with is Acheson's sharin' of one of the audience's members homage to our most beloved Dino......."For me, perhaps the most telling moment of the show was provided by an audience member who said she didn’t actually want to ask a question but just to tell Ricci that she had grown up in a household where Dean Martin’s music was played and loved and that his songs had helped shape her life."

Likes how wondrously wonderful is that pallies?!?!?!?!  Here's a obvious lover of our Dino speakin' of the transformin' power of our amazin' man.  How totally rad to have this lady openly and boldly give testimoney to how our Dino's croons "had helped shape her life."  Likes all we can say is likes how amazin'ly awesome is that!

As a little bonus, if you clicks on the tag of this Dino-message you will go directly to where this was first posted and you will be able to watch a couple minute vid of the closin' number of Ricci's Dino-trib where he croons our main man's main song, "Everybody Loves Somebody Sometime."  ilovedinomartin salutes our Dino's boy pallie Ricci for keep the Dino-light glowin' Dino-bright, and to Mr. Mark Acheson for his favorable review of Ricci's show.  Dino-reportin', DMP If you’re a son who chooses to follow the same career path as a famous father, it’s inevitable that to a large degree you’ll live in his shadow.

Ricci Martin elects to do so, his stage dominated by huge projected images of his legendary dad Dean Martin as he pays a personal homage.

And it is a flesh and blood reminder of the wonderful legacy left to the world by the Rat Pack maestro.

Okay, although Ricci has a very good voice with which to croon his father’s greatest hits no-one but no-one can come close to that wonderful lustrous tone and, okay, he doesn’t really give a lot away of lot of secrets when he wanders among the audience for a question and answer session about Dino.

But he endears himself to fans as he basks in the adoration felt for his father. And he takes them back to a golden age as he sings classics such as Volare, That’s Amore and the show-closing Everybody Loves Somebody.

For me, perhaps the most telling moment of the show was provided by an audience member who said she didn’t actually want to ask a question but just to tell Ricci that she had grown up in a household where Dean Martin’s music was played and loved and that his songs had helped shape her life.

Such is the rich legacy that Ricci Martin is reminding us of. As his dad said, memories are made of this. 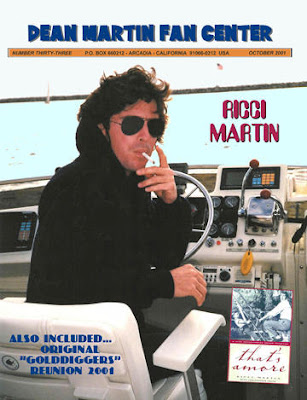 Posted by dino martin peters at 7:03 AM

What a wonderful story! It is always wonderful to hear things like this!

Hey pallie, likes Scotty dude, likes couldn't 'gree with you more...when we read this chick's Dino-testimony we were so so psyched and likes totally totally pumped! Keeps lovin' our msot beloved Dino!

Hey pallie, likes we're with you Danny-o....how wondrous it musta be for Ricci to so so homage his greatest of greatest daddy-o! And, likes we loves hearin' more and more true stores of the transformin' power of our Dino. Keeps lovin' our great great man!