But what comes across most powerfully in this definitive memoir is the depth of love Lewis felt, and still feels, for his partner, and which his partner felt for him: truly a love to last for all time.

Hey pallies, likes been a very long time since we have published a review of a book dedicated to the life, times, and teachin's of our Dino, probably mostly 'cause there has not been a new Dino-read in a long time...at least one worthy of makin' mention of.  But, likes today we are delighted to publish a recent review of our great great man's great great partner in comedy, Jerry Lewis's tome of amore to his partner, "Dean & Me (A Love Story), written with Mr. James Kaplan.

We have been meanin' to return to Mr. Lewis' masterpiece of deep, pure, and true devotion to our Dino, and today's most is makin' yearn the more to give this lovin' memoir a second read.  From the book review blog, "The Skeptical Reader - I read and I spectulate" come a remarkably sensitive review scribed by Miss Yamini.

As you read through her review, you know that this Dino-bio profoundly moved Yamini.  Twice she tells her readership...."This book. Broke. My. Heart. It yanked it right out of my chest, crushed it, and then stomped all over the piece."  Don't want to give the reason away, so youse are goin' to have to read all the details, but suffice it to say, she gets how much Mr. Lewis always has and always will love our most beloved Dino.

We were quite deeply moved by how much Yamini was moved as she took this tremendous tome into her heart, and we thank her for sharin' her evocative emotional response to Mr. Lewis' recountin' of his decade long partnership with the King of Cool.  To checks this out in it's original source, please clicks on the tag of this here Dino-gram.  Dino-reportin', DMP 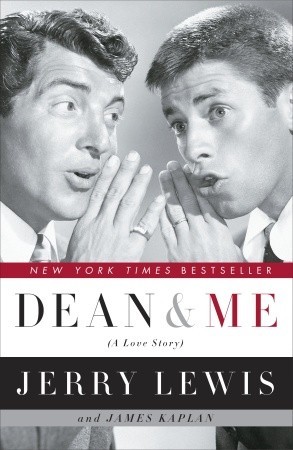 Dean & Me by Jerry Lewis
Published: 2005
Genre: Memoir
Edition: Hardback, Doubleday
Length: 352 pgs.
They were the unlikeliest of pairs—a handsome crooner and a skinny monkey, an Italian from Steubenville, Ohio, and a Jew from Newark, N.J.. Before they teamed up, Dean Martin seemed destined for a mediocre career as a nightclub singer, and Jerry Lewis was dressing up as Carmen Miranda and miming records on stage. But the moment they got together, something clicked—something miraculous—and audiences saw it at once.
Before long, they were as big as Elvis or the Beatles would be after them, creating hysteria wherever they went and grabbing an unprecedented hold over every entertainment outlet of the era: radio, television, movies, stage shows, and nightclubs. Martin and Lewis were a national craze, an American institution. The millions (and the women) flowed in, seemingly without end—and then, on July 24, 1956, ten years from the day when the two men joined forces, it all ended.
After that traumatic day, the two wouldn’t speak again for twenty years. And while both went on to forge triumphant individual careers—Martin as a movie and television star, recording artist, and nightclub luminary (and charter member of the Rat Pack); Lewis as the groundbreaking writer, producer, director, and star of a series of hugely successful movie comedies—their parting left a hole in the national psyche, as well as in each man’s heart.
In a memoir by turns moving, tragic, and hilarious, Jerry Lewis recounts with crystal clarity every step of a fifty-year friendship, from the springtime, 1945 afternoon when the two vibrant young performers destined to conquer the world together met on Broadway and Fifty-fourth Street, to their tragic final encounter in the 1990s, when Lewis and his wife ran into Dean Martin, a broken and haunted old man.
In Dean & Me, Jerry Lewis makes a convincing case for Dean Martin as one of the great—and most underrated—comic talents of our era. But what comes across most powerfully in this definitive memoir is the depth of love Lewis felt, and still feels, for his partner, and which his partner felt for him: truly a love to last for all time.
GoodReads | Barnes and Noble | Amazon | BookDepository