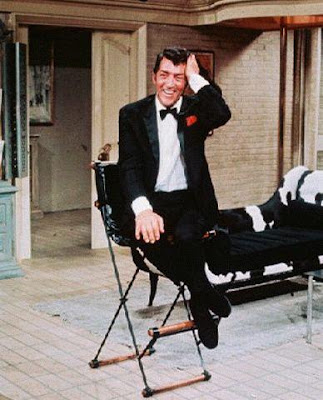 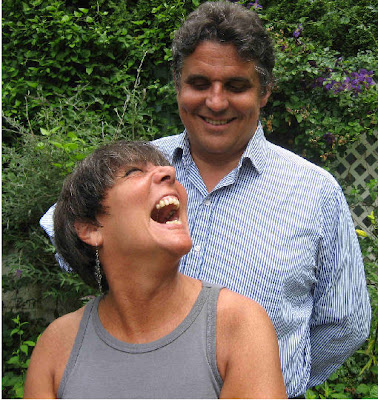 Hey pallies, likes thin's have been a bit heavy 'round these Dino-parts of late, so let's enjoys a bit of Dino-levity this very Dino-day! Today's Dino-devotion comes from a new to ilovedinomartin blog tagged STUPIDEST.COM likes where Team Stupidest, a bro and sis (see pix 'bove, share ...the stupidest things ever said, done, manufactured, written, broadcast, produced, invented...."

This here edition tagged, "The Stupidest Case of Mistaken Identity, Rat Pack Members and Insurance Salesman subdivision" features what appears to be a real newpaper ad for Littman Insurance in Michigan where the pallies there are claimin' that Mr. Tim Littman is a Dino-look-a-like.

Likes does wonder if Mr. Tim bears any resemblance to our great man...but likes knows just seein' the ad has brought such a huge Dino-buddha-grin to this Dino-holic's face! Hats off to the Littman Insurance Agency and Mr. Tim Littman for such a unique way of honorin' our Dino, and to boy and girl pallie of Team Stupidest for findin' it and sharin' it with all their readership. To view this in it's original format, likes just clicks on the tag of this Dino-report. Keeps lovin' our Dino! Dino-delightedly, DMP

Well, they do say everyone has an identical twin somewhere in the world … 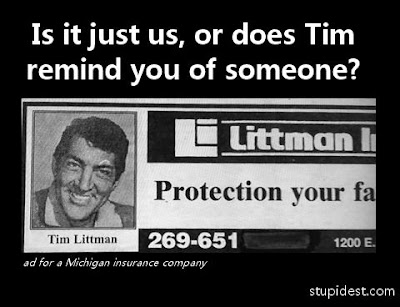 I wonder if this advertising method brought in a lot of business?

Hey pallie, likes Miss AOW, all I can say is I woulda certainly loves doin' some business with a dude who emulates our Dino! Keeeps lovin' our Dino!

Thats no look a like, its Dino for sure

This is definately Dean :)
I have an LP cover my dad owned, an Australian release of Only Forever with this exact picture.
Good advertising idea :)

Hey pallie, likes Levi, of course you are correct man...all us Dino-holics truly knows our Dino! Keeps lovin' our Dino!

Hey pallie, likes yeah Miss Ky, I did try to find that pix on the 'net 'cause I knew I had seen it before...thanks for the Dino-verification! Keeps lovin' our Dino!

Yeah that's Dino alright. But now that this story is "out there"...they'd better change that picture pronto before Dino's Estate comes knocking for a cut of the action! This ain't like the old days when Dean and Greg Garrison got by for thirty years on a handshake!

Hey pallie, ha ha Matty! Likes it seems that so so many simply wanna cash in on our most beloved Dino...I wouldn't be surprised if what you said came true...thanks for readin', thanks for commentin', and likes 'bove all else, keeps lovin' our Dino!