Hey pallies, likes often when you uncover one bit of Dino-devotion at a blog pad, there is likes often more Dino-gold to be mined there. Case in point, after discoverin' yesterday's Dino-thoughts from Mr. Jack Pendarvis at this blog, "The Place Where Jack Pendarvis has a 'Blog,'" likes I decided to roam all over Jack's pad to see if my change he had shared more cool Dino-reflections.

Likes without much effort (our Dino woulda loves that part) I came 'cross 'nother great postin' on our most beloved Dino's scent of choice, Woodhue! As you see by the tag of the post, it proclaims the Dino-truth..."Dean Smelled Great." And, likes as you will read below, it's a very short sharin' from Mr. Jerry Lewis's amore to our Dino, "Dean And Me: A Love Story."

Loves readin' this cool retellin' of our Dino's after-shower routine with his Woodhue! How privileged Mr. Jerry Lewis was to be so close to our great man....and for 10 years of his life!

Kudos to Mr. Jack Pendarvis for sharin' this Dino-vignette at his outstandin' blog. To read this in it's original format, likes just clicks on the tag of this Dino-report. Keeps lovin' our Dino! Dino-diggin', DMP 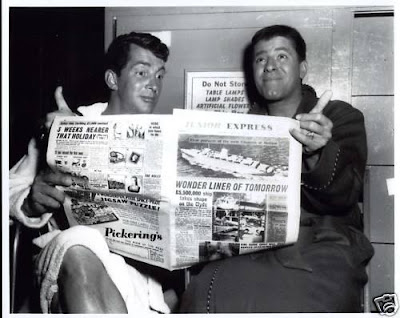 "I began paying close attention to Dean's postshower ritual: He would take his bottle of Woodhue, pour some into his cupped palm, then put the bottle down and slap his palms together. Then he'd rub the cologne all over his body - as far as I could see, anyway. At this point he was always in the bathroom, the door just slightly ajar to let out the steam. After a couple of minutes, he'd emerge in his robe, smiling with complete satisfaction: He looked, felt, and smelled great!" (from DEAN & ME by Jerry Lewis)
Posted by dino martin peters at 7:15 AM

Woodhue was unavailable until recently.

In fact, Deanna Martin wrote in her book that she had the last of a nearly-empty bottle that she occasionally opened and smelled to remember our Dino.

Scents, of course, are the longest of all our memories.

I hope that Deanna is now able to replenish her supply of Woodhue, a scent that comforts her a great deal.

Hey pallie, likes thanks so much Miss AOW for that Dino-info...Matty has spoken of bottles of Woodhue goin' for 200 bucks or more on Ebay....I'm wonderin' if that is the original stuff? Keeps lovin' our Dino!

Get it at Vermont County Store for $40! You gents might like to buy Woodhue at that decent price.

I note that other recommended products -- certain scents for women -- we the ones that I used back in the day. A bit of synchronicity with our Dino for me!

Hey pallie, likes thanks Miss AOW, likes I went to the Vermont pad and zoomed in on the Woodhue pix to see if I coulda see if it was Fab's product...or perhaps a knock-off...couldn't find any name listed. Keeps lovin' our Dino!

DMP,
Well, if the scent is the same, it might be worth buying.

Vermont Country Store typically has good products from days gone by -- even if the products are knock offs.

I think that I'll buy Mr. AOW some Woodhue. Heh.

Hey pallie, likes Miss AOW, if the way be clear, woulda you be willin' to report on the quality of the VCS version of Woodhue..if and when you gets Mr. AOW some. Keeps lovin' and partakin' of our most beloved Dino!

Yeah, when I get my husband Woodhue, I'll write a review.

Mr. AOW and I will be celebrating our 40th wedding anniversary in June. What better gift than Woodhue!

Hey pallie, likes how groovy is that.....likes what coulda be a better Dino-gift for the man you love. Keeps lovin' our most beloved Dino!

Woodhue? Wow, that brings back happy memories. My mom always wore it. As I remember, it was always a ladies' cologne, but I'm sure on Dean it smelled very masculine!

Hey pallie, likes Carol, I don' think that I have ever heard of Woodhue bein' worn by a lady before... very interestin'...keeps lovin' our most beloved Dino!

I just googled Woodhue. It was available in both women's and men's fragrances. Obviously, Dino bought the men's version!

Hey pallie, likes thanks Carol for doin' the Dino-researchin'...very cool to know...keeps lovin' our Dino...and keeps dem cards and letterin' comin' in...