I think Dean Martin steals the movie as the alcoholic deputy.

Hey pallies, likes by the tag of this Dino-gram likes y'all knows that today's Dino-devotion is 'bout our great man starrin' in the greatest classic western of all times, "Rio Bravo." From the pen of our great Dino-hearted pallie, Mr. David Lobosco, at his amazin'ly entertainin' blog, "Great Entertainers Archive," comes a very very fine review of "Rio Bravo."

Likes it appears that Lobosco and I are two dudes in a pod 'cause likes our pallie, I ain't much one for viewin' westerns...but, likes of course, I always always makes an acception when it comes to our Dino's westerns...'cause anythin' with our Dino in it is so so worthy of our Dino-viewin'!

David and I are likes also on the very very same Dino-page when he makes the most brilliant of brilliant of Dino-observations..." but in this movie I think Dean Martin steals the movie as the alcoholic deputy." Always and ever, I have held the total total Dino-belief that our most beloved Dino as the Dude is truly the center-piece of this classic western. Truly, truly our Dino's performace is the greatest achievement of his actin' career...and our Dino was so so robbed by not even gettin' an Oscar nod for his awesome performance.

ilovedinomartin is very very grateful for the many and varied ways that our Dino-invested pallie Mr. David Lobosco continues to keep the Dino-light glowin' Dino-bright at his blogs...hugely helpin' the Dino-cause of liftin' up the life and times of our amazin' Dino. To view this in it's original format, likes just clicks on the tag of this here Dino-report. Dino-ever, DMP 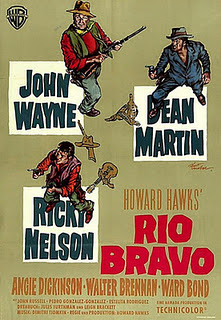 Of all the genres of classic film, probably westerns are my least favorite. I was born after all of those television westerns like Bonanza and Gunsmoke, so I never really go an appreciation for the movie western. However, I have been trying to watch a few from time to time, and one western that has really caught my eye was the classic Rio Bravo. Made in 1959, Rio Bravo was directed by Howard Hawks. The script was written by Jules Furthman and Leigh Brackett, based on a short story by B.H. McCampbell. The film is considered one of the masterpieces of American Cinema. The movie stars John Wayne, Dean Martin, and Ricky Nelson, with Angie Dickinson, Walter Brennan, and Ward Bond. I have always been a huge John Wayne fan, but in this movie I think Dean Martin steals the movie as the alcoholic deputy.

In the town of Rio Bravo, Texas, sheriff's deputy Dude (Dean Martin), who has acquired the contemptuous nickname "Borrachón", enters a saloon to get a drink. Joe Burdette (Claude Akins), brother of rancher Nathan Burdette, tosses a silver dollar into a spittoon at Dude's feet. As Dude reaches for the spittoon, Presidio County, Texas Sheriff John T. Chance (John Wayne) appears and kicks the spittoon away, looking at Dude with pity. Dude whacks Chance with a piece of wood, knocking the sheriff out cold. Joe begins punching Dude as two men hold Dude, then shoots an unarmed bystander dead when he tries to intervene.

Joe leaves the saloon and heads to his brother's saloon, where a bloody Chance arrests Joe for the murder of the bystander. When another patron draws his gun on Chance, causing a stalemate, Dude shoots the gun out of the patron's hand, Chance slugs Joe with his rifle, and the sheriff and his deputy drag Joe off to jail.

While the funeral for the unarmed man is being held, Chance's friend Pat Wheeler (Ward Bond) and his supply train arrive, with him is a young gunslinger, Colorado Ryan (Rick Nelson), riding guard. Wheeler informs Chance that Nathan Burdette's men stopped him before entering the town, meaning that the town is "bottled up" to prevent Chance from getting Joe to Presidio or any assistance in. Inside the jail, Stumpy (Walter Brennan), Chance's other deputy, keeps watch over the jail and Joe. Chance takes a package to the proprietor of the hotel, Carlos Robante (red lingerie for his wife, Consuelo (Estelita Rodriguez). A mysterious woman, Feathers (Angie Dickinson) arrives for a night. Chance tries to help her leave town the next day but the stage wheel is busted (possibly by Burdette men) and cannot leave.

Dude and Chance patrol the town, Dude trying to get off the bottle, when Carlos stops the sheriff, saying Wheeler was talking too much about Chance needing help. Chance implores Wheeler to stop, as it will draw attention from the wrong people. Wheeler and Chance discuss Dude; about three years earlier Dude was a top-notch gunman until he "met a girl on the stage", who was no good (Chance was nearly killed when he tried to tell Dude) and they left together. Six months later Dude came back without her, drunk (hence his name, "Borrachón"), but Dude has stopped drinking due to the crisis. Wheeler offers Colorado for assistance but Colorado politely declines, saying he wants to "mind his own business". Wheeler plans to leave town. Feathers leaves a poker game a winner, Chance follows her up to her room and confronts her as a card cheat, with his evidence four missing aces from the cards being used, and a handbill indicating she was wanted for card cheating. Feathers confesses she is the girl in the poster but denies cheating, and challenges Chance to search her for the missing cards. Colorado arrives saying another participant in the game is the real cheater and plans to confront him, with Chance's acquiesence. Colorado is proven right, and the real card cheat is sent out on the next stage. Chance admits he was wrong but refuses to apologize, saying Feathers is still wanted and wants her out of town. Wheeler is walking toward his room but is shot dead by a Burdette man hiding in the stable. Colorado offers to help but is angrily turned away by Chance, saying "you had a chance to get in this and you didn't want it". 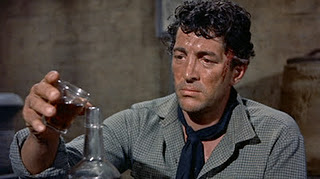 Chance and Dude flush out the shooter, who escapes into Nathan's saloon. Dude noticed the man had muddy boots, but everyone in the bar had clean boots, making them think Dude's drinking had clouded his mind, prompting one patron to throw another silver dollar into a spittoon. Dude notices blood dripping into a drink on the bar and takes one shot into the loft, killing Wheeler's murderer. Dude then gets retribution on the patron who threw the dollar in the spittoon by making him go get it.

Chance goes to the hotel to sleep, insisting Carlos wake him up, unbeknown to him, Feathers stands guard at the door to keep him safe, then runs into her room when he awakens. Chance sees Feathers and asks why she did that but she wouldn't say, then Chance tries to get her on the stage. Meanwhile, Nathan (John Russell) arrives in town with his men, intent on seeing Joe. After one of his men tries to get past Dude, who was confiscating all guns before entering, Dude shoots one of his horses's reins and Nathan agrees to turn in their guns until they leave. Nathan sees Joe, and after a few angry words between the land baron and Chance, is told in no uncertain terms if he attempts to overrun the jail his brother would be shot before they reached him. Nathan then leaves to visit his bar, instructing the band there to play the Deguello (the "cut-throat" song) non-stop.

Carlos says Feathers still will not get on the stage, and when Chance goes to see her she tells the sheriff that she does not want to leave, then gives Chance a kiss. After Colorado visits the jail to tell Chance the meaning of the song Nathan is playing, Chance gives Dude his guns back (the ones he had before he left town, sold by Dude but bought by Chance) as well as some clothes he left behind. Dude gets a bath and a shave, then returns to the jail while Chance and Feathers get better acquainted. Suddenly a shot rings out and Chance races to the jail, only to find Stumpy had shot at a shadow (Dude) in front of the jail. Dude and Stumpy exchange angry words, then Chance tells Dude they've been "pampering him too much" and to get some sleep. 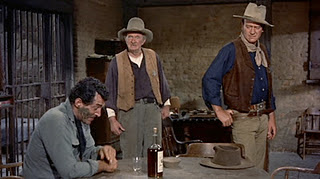 The next morning, Dude is standing guard when four Burdette men stick his head in a water trough, then tie him up in a stable. Approaching Chance on the street in front of the hotel with a fake injury, they draw guns and corner him (Chance's rifle is out of reach), and demand that he release Joe. Inside the hotel, acting on Colorado's instructions, Feathers throws a flowerpot through a window a moment after Colorado steps out on the porch, distracting the Burdette men. Colorado throws Chance's rifle to him and the two men shoot the four Burdette hands.

Chance races down the street, finds Dude tied up in the stable and frees him. Dude, frustrated by his performance and recovering from his extended drunkeness, resigns as deputy, then slaps Chance when he tells Dude he will have to get his own silver dollars out of the spittoon the next time. Colorado agrees to join Chance as deputy and then Dude reconsiders quitting after hearing the Deguello song, reminding him why he was there. The group decides to hole up in the jail, as it will take six days for the United States Marshal to arrive to take Joe to Presidio. Dude and Chance go to the hotel to round up the supplies, but Carlos and Consuelo are captured by Burdette men, and trick Chance into charging down the stairs, falling over a trip-wire, knocking out the sheriff. Dude and Feathers are also captured. Chance is given a choice--take the men to the jail to let Joe out, or the men will arrange a trade with Stumpy for Dude and Chance. Dude implores Chance to let Joe out, saying that Stumpy has no food or water to hold out very long. Chance agrees, and three men go to the jail. Dude's story was a ruse, as Colorado is with Stumpy and the three of them shoot the three Burdette men. 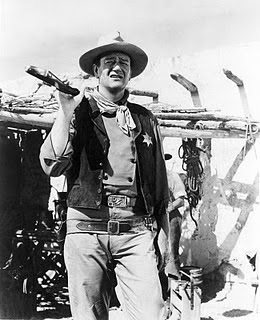 The remaining Burdette men at the hotel take Dude and offer to trade him for Joe. Chance agrees, and the trade is made at a warehouse. But Dude bum-rushes Joe and they fight while a gunfight erupts; Dude takes Joe out and Stumpy (who followed them over after being told to stay behind) finds some dynamite in one of Wheeler's wagons, and throws it at the building Burdette's men are in, eventually exploding the front of the building and forcing Burdette to surrender. With the Burdette men in jail, Chance goes to see Feathers, who is working at the hotel and wearing black tights. Chance objects to the tights, saying that only he should see her in them, and as they kiss Feathers throws the tights out the window, at the feet of Dude and Stumpy, who say nothing...