I wanted to be Dean Martin, crooning into the mic, drink in hand. 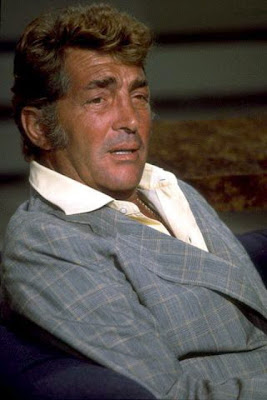 Hey pallies, likes how totally totally refreshin' to keeps on findin' dudes all over the 'net likes whose life goal is to emulate our most beloved Dino! Today's Dino-find comes from the pad, "Twin Cities Daily Planet," where a scriber tagged Miss Lu Lippond holds forth with her eatery edifications tagged, "Bite It!" Just knows our Dino woulda loves the tag of the column!!!

Well Miss Lu has written a food review of the Harbor View Cafe in Pepin, Wisconsin that recently held a very special "Italian Night" feed. In a brief bit of Mrs. Lippold's review below we partake of an excerpt of a Q&A dialogue she did with Harbor View's chef, Tom Skold.

As you will read, Scandinavian Tom is likes a Dino-holic's Dino-holic bein' totally totally sold out to our Dino from his wee years, proclaimin' "When I was a kid, my favorite thing on TV was The Dean Martin Show. I wanted to be Dean Martin, crooning into the mic, drink in hand....." Chef Skold not only cooked Italiano, he took on alter-ego "Danny Chameleon" becomin' his Italiano Idol Dino and croonin' away for the restauranto's patrons.

Hats off to Miss Lu Lippold for sharin' this fab story of Tom Skold's Dino-devotion...and to Mr. Tom for so openly and boldly proclaimin' his Dino-adulation!
To read this in it's entirety, just clicks on the tag of this Dino-gram.. Dino-delightedly, DMP

By Lu Lippold, Bite it!

During the off season, the Harbor View very occasionally opens up the kitchen for a special dinner. Last month, Harbor View chef Tom Skold, normally a mild-mannered Scandinavian, adopted the persona of imaginary Dean Martin impersonator "Danny Chameleon" and put on an Italian-American extravaganza. This involved lots of red sauce and some singing into a wire whisk, which "Danny" apparently mistook for a microphone. Oh, I’m telling you, it was quite a night. I spoke with chef Tom about it, once he was back to his normal self. 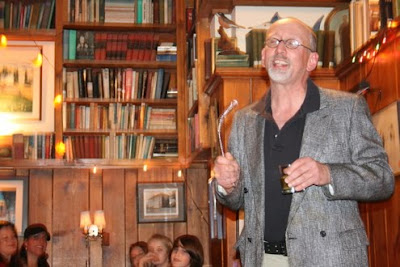 LL: How did you develop this Italian schtick?

Tom: When I was a kid, my favorite thing on TV was The Dean Martin Show. I wanted to be Dean Martin, crooning into the mic, drink in hand. He was my Joe Camel. My parents wanted me to be a Lutheran minister, but I had other ideas.

LL: The menu says the Italian Night chef is “Danny Chameleon,” who turns out to be you.

Tom: Yes, he’s my alter ego. The staff used to have annual talent shows over at Emmanuel Lutheran and give the proceeds to charity. My doppelganger would sing a few tunes, Dean Martin style. So when we were talking about doing an Italian night, Danny Chameleon came out again.
Posted by dino martin peters at 7:24 AM