Hey pallies, likes as I have often said before, likes you just never know where our Dino willa turns up next. Today's Dino-grams gonna brings a big Dino-buddha-grin to your face when youse sees the Dino-poster below. From the Brit pad, Mirror.co.uk.'s
"The Ticket, The Ultimate Entertainment Blog," comes news of a very creative poster project created by illustrator Mr. Sean Hartter.

Hartter's "Altermative Universe Movie Poster" project asks artistic pallies to create some "reimagining" of classic flick pixs." One such illustration comes from Mr. Peter Stults, a NY illustrator and designer, who features our most beloved Dino with his partner Mr. Jerry Lewis, and Mr. Jack Lemmon in the wanna-be big screen epic "The Hangover."

Likes pallies, I am sure that our great man woulda loved to played in said flick with such a Dino-inspired theme! Woulda be so so fun to have creative Dino-holics write their thoughts 'bout how the plot might likes go for this reimaged classic.
Likes I coulda see our Dino and Mr. Jack as great pallies who enjoys themselves some liquid refreshments with Jerry tryin' to bring 'em to sobriety. Your thoughts pallies?

Just loves to find the many and varied ways that our Dino continues to be manifested all over the 'net....helpin' more and more pallies to come to know, love, and honor our most delightful Dino. Hats off to the pallies at Mirror.co-uk for bringin' this Dino-creativity to our attentinado! Thanks also to our great pallie Danny G. who first put me on to this Dino-poster. To view this in it's original format, likes just clicks on the tag of this Dino-message. Dino-proclaimin', DMP


Illustrator Sean Hartter, 38, has been reimagining classic film posters but with retro casts since 2009.

And his Alternate Universe Movie Poster project encourages other artists to come up with their own designs.

Among them are works by New York illustrator and designer Peter Stults who has also cast Al Pacino as Wolverine, along with Dean Martin, Jerry Lewis and Jack Lemmon in The Hangover. 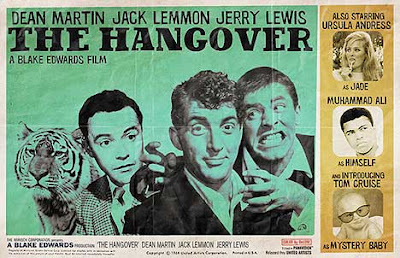 Jack Lemmon, Dean Martin and Jerry Lewis star in Stults's version of The Hangover
Posted by dino martin peters at 7:18 AM