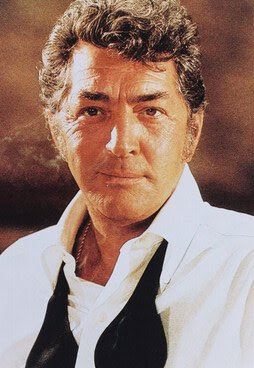 Hey pallies, likes there is simply no end to the Dino-devotion to be found all over the web, and if likes I am willin' to spend the time searchin', new Dino-treasure is always a click or two away!

Case in point, a couple of days ago I spend just a bit of time searchin' blogs for Dino-adulation, and likes I came up with 'nough Dino-devotion to share with all youse Dino-holics for the next few. Today's Dino-appreciato comes from a blog tagged, "Article Downpour - raining articles," one of those sites that has a plethora of informatio on a plethora of topics.

Likes it's so so easy to miss the Dino-action when it is buried between information on soup to nuts, but with just a bit of patience, google blog search took me directly to freelance writer, Art Gib's stunnin' bit of Dino-prose tagged, "Dean Martin: An American Icon."

With a tag likes that, you simply knows that you have struck Dino-gold, 'cause indeed Mr. Gib is a true devotee of our most beloved Dino and his Dino-reflections simply is a deep and dense downpour of impressive Dino-devotion. In one simple set of words, Gib sets the Dino-tone is a most excellent Dino-way, sayin'...."This enormously talented man was a Jack of all trades who crossed all kinds of genres and mediums during his long career."

Well, likes I coulda go on and on quotin' Art Gib's amazin' Dino-truths, but then likes you woulda not needs to read the article, just like our Dino often said that he didn't want to sing a whole song 'cause then you woulda never buy the al-b-um!
So takes the time to soak in all the Dino-truths found in "Dean Martin: An American Icon."

ilovedinomartin sends out mucho Dino-appreciato to Mr. Art Gib and the pallies at
"Article Downpour - raining articles," for such an outpourin' of deep, pure, and true Dino-devotion! Sure to help many pallies grow deep in their Dino-addiction! To view this in it's original format, likes just clicks on the tag of this Dino-message. Drinkin' Dino-deeply, DMP

Dean Martin was an iconic figure in American entertainment, even when he was still living. This enormously talented man was a Jack of all trades who crossed all kinds of genres and mediums during his long career. Here is a short synopsis of his life and times.

Dino Paul Crocetti was born of Italian-American parents in Steubenville, Ohio in 1917. He grew up in a working class family and times were tough during the Depression years, as they were for so many others. Young Dino survived as best he could after dropping out of high school: he delivered bootleg liquor, worked in a steel mill, and even tried his hand as a black-jack dealer. He was strong and athletic, and by 15 he was trying to make it as a boxer called Kid Crochet. That career was short-lived, however, and while working odd-jobs he began to exercise his natural vocal talents by singing with local bands.

In the early 1940's, his crooning style began to get noticed and while singing for bandleader Sammy Watkins, he changed his name to Dean Martin. As his career progressed, he became as well known for his good looks, charm, and charisma as he was for his singing talents. He found a modicum of success singing in local clubs in the East, both before and after WWII, but he was still waiting for that big break.

That turning point came when he met another nightclub performer named Jerry Lewis. The two formed a music and comedy act which at first was very poorly received. When they added what would become their trademark slapstick routines, the pair's popularity soared and they gained the attention of the movie industry. Theirs was one of the hottest acts in the country during the 1950's, and Martin played straight man opposite Lewis's zany antics.

After Lewis and Martin broke up in 1956, Lewis began to concentrate on his acting career in earnest; during the 1960's he became one of the most versatile stars around, specializing in Westerns while maintaining a recording and nightclub performance career as well. As a member of the legendary "Rat Pack," Martin continued to cultivate his reputation as a hard-drinking, high living womanizer, and it was on this reputation that he based his next endeavor: The Dean Martin Show.

The Dean Martin Show marked the entertainer's leap to the television medium and the enterprise was a wildly successful one. Largely improvisational, the show was a nightmare for censors but the audiences lapped up its raucous and often bawdy humor. When Martin began producing Celebrity Roast specials during the 1970's and 80's, audiences were able to enjoy a side of celebrities they rarely got to see.

Dean Martin officially retired from show business in 1991, just four years prior to his death from lung cancer. But he left behind a breathtaking portfolio of songs, movies, and television performances that continue to perpetuate his legendary status even today.
Posted by dino martin peters at 7:17 AM

This is one smart fella who really knows his Martin!!!

Hey pallie, likes of course how coulda I not agree with your Dino-perspective...this guy's openin' line simply wowed me with his Dino-appreciato! Keeps lovin' our Dino pallie Danny-o!