......"Dino" was an extremely popular singer with the Italian segment of society.

Hey pallies, likes once 'gain this Dino-day we are powerfully privileged to be able to share even more international devotion to our Dino, this time from southeastern European  country of Greece.  From the personal blog of Mr. Lefteris Kogalidis tagged "nostos-music.blogspot" comes the primo post simply stated, "Dean Martin."  Mr. Kogalidis' bio tells us that he has been a " Journalist, editor-in-chief, television director, director of public and international relations."  How fully fantastic to see someone with Mr. Kogalidis' brilliant background sharin' his awesome appreciation for our Dino at his personal pad.

Likes interestin' Mr. Kogalidis has chosen to share images of our most beloved Dino's restin' place as well as a popular pix of our great man holdin' his ever present cigarette and givin' that irresistable glace that he is famous for.  The content of his prose gives us Lefteris's personal touchin' 'n tender thoughts on the life 'n times of our Dino...givin' us many well known facts in his own wonderful way.

We, likes, never ever tire of sharin' awesome adulation from 'round the Dino-globe and we are once 'gain thankful for folks like Mr. Lefteris Kogalidis for spreadin' their personal delight in our Dino with there readership, surely helpin' many come to their own deeper 'n deeper delight in our King of Cool.  Thanks!  Mr. Logalidis for doin' your part in spreadin' Dino-adulation 'round the ol' 'net!
To checks this out in it's original source, likes simply clicks on the tag of this Dino-report. 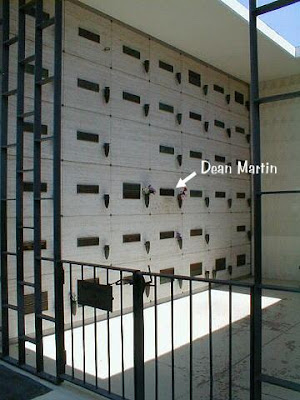 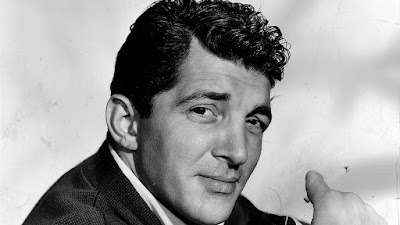 Legendary Singer, Actor, and Comedian. Born Dino Paul Crocetti in Stuebenville, Ohio. Before achieving stardom, he performed various job duties, some of which were as a steelmill worker, a service station attendant, a gambler, and he also tried to be a professional boxer. As a boxer, he fought under the name of "Kid Crochet." When asked about his boxing career, he said that he had won "all" but 11 of his 12 bouts. In 1946 his life would change forever when he met a very hard working young up-start named Jerry Lewis. This would mark the beginning of one of Hollywood's greatest teams. During the next 11 years and 16 films, the team of Martin and Lewis not only brought about super-stardom, but it also brought a lot of personal conflicts. These conflicts not only led to their break-up, but the hurt was felt by the two for a great number of years. After the Martin-Lewis split, 1958-59 brought two films for Dean, "The Young Lions" (1958) and a film entitled "Rio Bravo" (1959). In this film, he was not only starring with another Hollywood icon, John Wayne, but also a very popular teen idol, Ricky Nelson. While sharing songs with Nelson in this film, it became a hit with music fans everywhere. A 1960 film, however, added yet another high point in his career. The mega-hit film "Oceans Eleven" would bring with it the ever famous "rat pack" label, when he was teamed with Frank Sinatra, Sammy Davis Jr., Joey Bishop, and Peter Lawford. This proved to be an enduring bond among these greats. Dean's film career continued until 1965, when he made a daring venture into the television industry with "The Dean Martin Show." He hosted this show until 1973, and earned a Golden Globe award. His show would change, and by adding a panel of some of Hollywood's biggest names, the "Dean Martin's Celebrity Roast" was formed. This show would be known as one of the best in television history, and will remain a classic. When the show's run ended in 1984, and after a 19 year stint in tv, he thought it was a time to relax, but after a short respite, he went on a singing tour with his old friends of the "rat pack." But 1987 would bring with it a very tragic event, one from which Dean would never recover, when his son, Dean Paul Martin, was killed in a plane crash. Dean immediately left the rat pack tour, never to return, and he resigned to a solitary life until his death on a Christmas day. In his personal life, Dean was married 3 times, of which all ended in divorce. His first wife was Betty Mcdonald (1940-49) and had 4 children. His second wife was Jeanne Biegger (1949-73) 3 children. And his third wife Catherine Hawn (1973-76) with one step daughter. As a singer, he was known as one of the greatest crooners, and "Dino" was an extremely popular singer with the Italian segment of society. Dean has been honored by Hollywood with 3 stars on the Walk of Fame.

Inscription:
Everybody loves somebody sometime

Hey pallie, likes Danny-o, as youse can probably figure out, what we digs the mostest is that posts likes this proves the wide and depth, the height and length of devotion to our Dino all over the Dino-universe! Keeps lovin' 'n sharin' our one, our only DINO!

Dean has been honored by Hollywood with 3 stars on the Walk of Fame.

Great tidbit! I wasn't aware of this fact.

Hey pallie, likes Miss AOW, we knows that we have had several posts in the past 'bout our Dino's 3 "Stars," but glad you have picked up on it in this particular post. Keeps lovin' 'n learnin' Dino-style!