Hey pallies, likes we love roamin' all over the 'net lookin' for lush 'n lascivious postin's on our most beloved Dino, and indeed there is always mucho more delightful Dino-treasures to be uncovered.  Recently as we were viewin' a ton of Dino-images we came 'cross the one featured below that we the front page of the June 28-July 4, 1959 edition of the inquirin' minds wanna know rag, "THE NATIONAL ENQUIRER," who tags itself as "THE WORLD'S LIVELIEST PAPER."

Likes over the years, we've seen our Dino featured in the pages of this naughty newspaper time after time....and for good reason, for in Dino's day his fantastic fans coolly craved news of The King Of Cool.  But, we gotta 'fess up that we don't ever remember our Dino havin' the entire front page dedicated to his cool, hip, and randy persona.  It's a swank shot of our Dino and how coulda Dino-holics likes we not greatly groove on the cooler then cool captivatin' caption, "I'm Not a Bottle Baby, Says Dean Martin - BUT I GOT A RIGHT TO BE TIGHT!

Of course, this provocatively powerful quotation attributed to our Dino makes us deeply desire to be be able to read the interview followin' on page 3.  We, of course, will need to do some more swank searchin' to see if any pallies have put this particular prose up on the ol' net.  We sez our thanks to Mr.  Ody Rivas, who pinned  this Dino-gem at Pinterest.  Likes if you would like to view it where we found it, simply clicks on the tag of this Dino-gram. 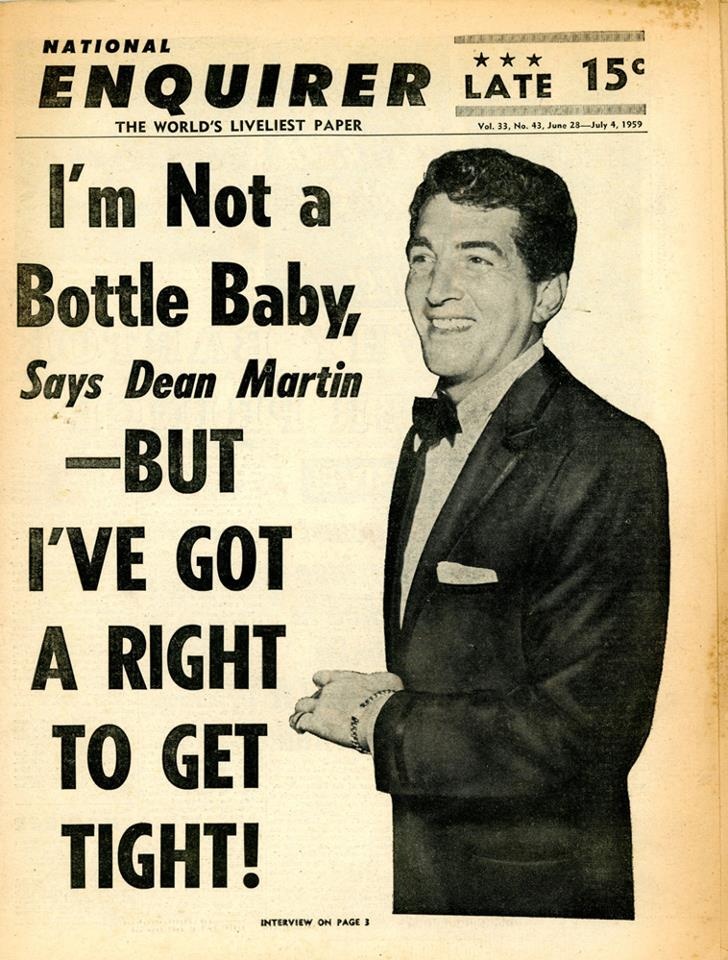 Posted by dino martin peters at 7:18 AM

Very cool indeed, pal! I'm assumin' this is a reference to Deans boozin'. Am I right, pals?
Haha! Either way...Awesome front page Dino-action!

Hey pallie, likes Danny-o, we woulda guess that your "assumin'" has a direct connection with our Dino's delight in liquid libations, in particular some J&B. Keeps lovin' 'n sharin' our most most beloved Dino!