Martin always had a cigarette in one hand and a whiskey cocktail in the other.

Hey pallies, likes welcome to June 2017 here at ilovedinomartin and Day 1 of our marvelous month long  Centennial Celebration of the Day That Coolness Came To Earth.  Likes it will be exactly 100 years 'go on June 7 that our most beloved Dino descended to our planet on June 7, 1917 in Stubenville, Ohio.

Likes amazin' awesome adulation of our Dino's life, times, and teachin' is beginnin' to pour into the ol' 'net from all areas of the known Dino-world, and likes we begin today by sharin'  incredible international Dino-devotion from the Brit pad tagged "MIRROR," where swank scriber Mr. Lewis Panther has offered profound prose and plentiful pixs in huge homage on the Centennial Celebration of our Dino's 100th Birtday.

Tagged, "Dean Martin at 100: Hollywood icon was born Dino Crocetti - and used humour to hide his crippling shyness," Mr. Panther's offerin' coolly covers our Dino's amazin' life and entertainer extraordinaire.  Perhaps the most intriguin' insight that Lewis hones in on his thoughts on how our Dino "used humour to hide his crippling shyness."  While, we would agree with this assessment to a point, we thinks perhaps that Mr. Panther may be overstatin' the case to some extent.

But, likes all in all, this is a truly lovin' expression of awesome apprecatio to our King of Cool and we thanks the pallies at "MIRROR," and in particular, Mr. Lewis Panther for spreadin' much love of our Dino to the "MIRROR" remarkable readership.  Likes, as usual, to checks this out in it's original format, likes simply clicks on the tag of this Dino-message.

His polished image ­earned him the crown King of Cool, yet behind the supposed boozing and ­womanising Martin would drink apple juice instead of whiskey in cocktails

His polished image ­rightfully earned him the crown King of Cool. Yet behind the supposed boozing and ­womanising, The People can reveal clean Dean was not all that he seemed.

One of the world’s most popular ­entertainers, he starred in a string of hit films with Jerry Lewis , was in Frank Sinatra’s Rat Pack and hosted his own TV variety show. But the relaxed crooner used humour to hide his shyness.
Dean was born Dino Crocetti in Steubenville, Ohio, to an Italian immigrant barber. He didn’t speak English until he was five and was then teased at school for his faltering language skills.

f  the world’s most popular ­entertainers, he starred in a string of hit films with Jerry Lewis , was in Frank Sinatra’s Rat Pack and hosted his own TV variety show. But the relaxed crooner used humour to hide his shyness. 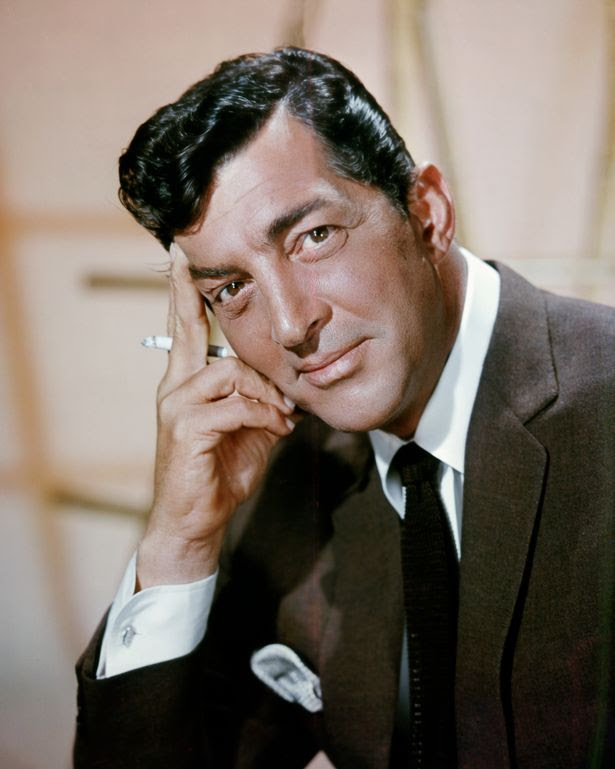 Dean Martin, picture here with his trademark cigarette in 1995, was born as Dino Crocetti (Photo: Moviepix)

Despite his womanising image, Dean was a family man and had eight kids(Photo: Archive Photos)            As the centenary of his birth approaches on June 7, it’s hard to believe he was ever anything but a born star. Yet he confessed to keeping quiet because of his English.

He said: “When Jerry Lewis and I were big, we went to parties and everybody thought I was big-headed and stuck-up, I wasn’t.
“It was because I didn’t know how to speak good English, so I used to keep my mouth shut.”
Growing up in the US during the Depression you had to be tough and adaptable to survive, and Dean was both.
He was a successful welterweight boxer, ­winning 24 of his 30 bouts as Kid Crotchet. Typically, later in life, he would joke he had 12 fights adding: “I won all but 11.”
Boxing was abandoned when he went to work as a croupier in an illegal casino behind a tobacco shop. He was singing with local bands and had already changed his name to Dino Martini. On the advice of a band leader he altered it again, to Dean Martin.
He made a good living singing in east coast clubs, even standing in for Sinatra in 1943. But success didn’t come overnight for Martin, who was two years into the first of his three marriages and a dad of one.
Meeting comedy actor Jerry Lewis would change that. Lewis became his screen, stage and nightclub partner for the next decade. 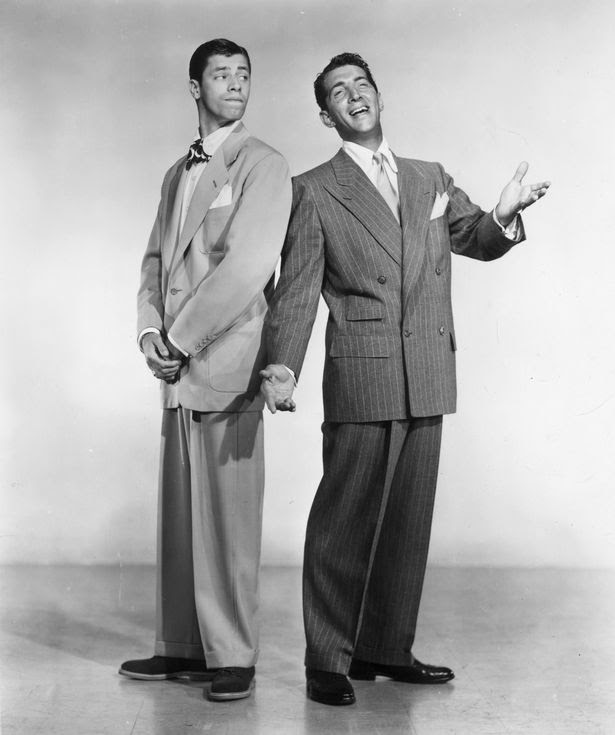 Dean with comedy partner Jerry Lewis in 1955 (Photo: Hulton Archive)                                                                          But one of the most successful double acts ever nearly died before it could start. The owner of Atlantic City’s 500 Club threatened to fire them after their first show in July 1946.
They pulled it out of the bag for the ­second show of the night by singing and cracking jokes. They became one of the most ­bankable ­partnerships in showbiz.
They only received $75,000 for the 16 films they did together but they made ­millions working in clubs, on radio and TV and by making records.
Lewis called his partner a comic genius but Martin said he hated their films.
He said: “They were Jerry Lewis movies. I played an idiot in every one.”
The end of their partnership in 1956 was characterised by bitterness and backstabbing. Lewis took the split hard and refused to listen to Martin’s ­records for years.
On the night of their break-up, Jerry had to take sleeping pills. But according to second wife Jeanne Biegger, Martin came home, had a fried-egg sandwich and watched TV as if nothing had happened.
But Martin in his inimitable style would pay his ex-partner a backhanded compliment by saying the two biggest turning points in his career were “meeting Jerry Lewis” and “leaving Jerry Lewis”.
Martin, who eventually had eight kids, would go on to sell millions of records with 40 hit singles between 1950 and 1969, including That’s Amore and Everybody Loves Somebody, which became his signature tune. 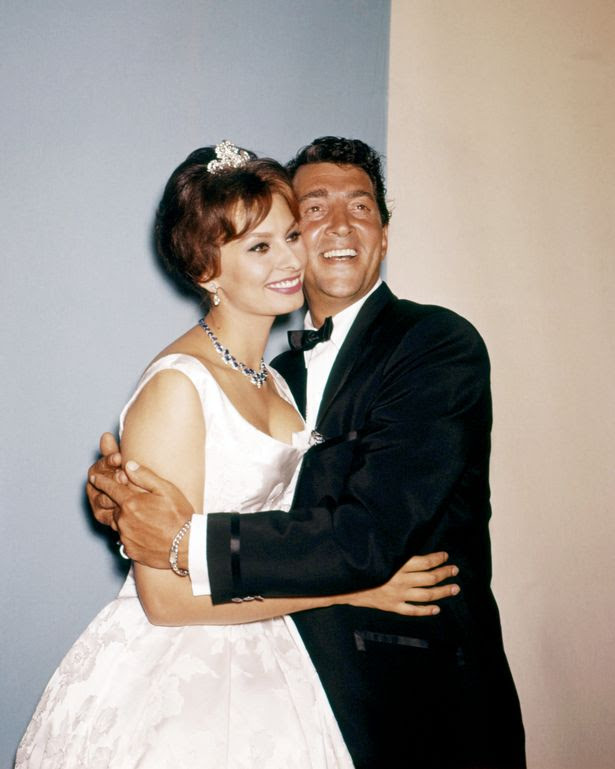 Dean embraces actress Sophia Loren in the 60s (Photo: Moviepix)                                                                                The modest crooner even kept The Beatles off the top of the charts when they broke through in the US. By then, Martin was MVP (most valuable player) in Sinatra’s Rat Pack along with Sammy Davis Jr, Peter Lawford and Joey Bishop.
The gang’s chemistry shone through in their 1960 cult film Ocean’s 11, remade by George Clooney and Brad Pitt , as well as on stage in Vegas with their long-running residencies at the Sands Hotel. The tuxedo-wearing performers would sing and tell risqué jokes about Sinatra’s womanising or Martin’s drinking, and Davis Jr’s race.
Martin always had a cigarette in one hand and a whiskey cocktail in the other. But the drunk, cool-guy act was just that – the booze was ­actually apple juice.
Backing singer Patti Gribow said: “Dean had a larger-than-life ­persona but he was not a womaniser or skirt-chaser. He was just a sweetheart of a guy. On stage, he was in control and acted like he was a drunk or he was going to chase the girl. He was always mischievous, off stage he was shy.”
He had affairs but Jeanne said: “He was home every night for dinner.”
In fact, the idea Martin was a party animal who hung out with Mafia wise-guys was not true.
Comedian Tom Dreesen, who opened for Sinatra in the 80s and 90s, said: “Dean had hands the size of a ham and he could handle himself. He didn’t say a whole lot.
“Sinatra respected Dean more than any man alive. He was the brother Frank never had. Frank longed to be a tough guy, Dean was a tough guy who didn’t take any cr*p from anybody, especially Frank. 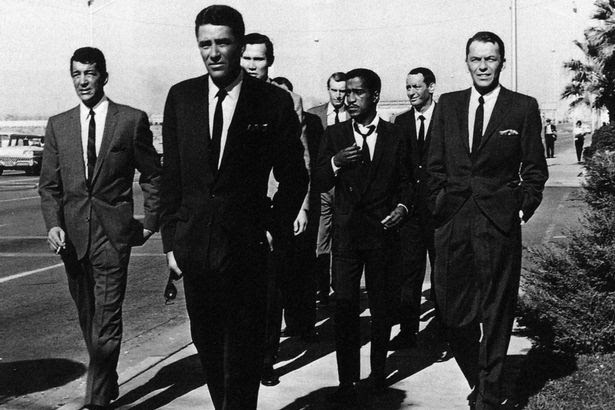 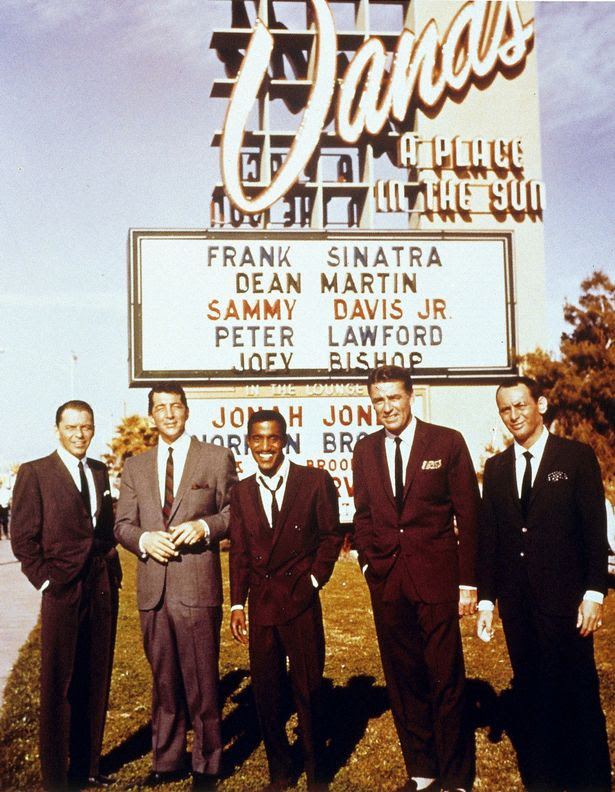 A stand-in took his place from Monday to Thursday while Martin played golf. His laid-back approach bordered on laziness but didn’t always work. In 1972, his partnership a Vegas hotel was cancelled because he would only make one performance a night.
In 1993 he was diagnosed with lung cancer and died of acute ­respiratory failure two years later, aged 78.
One LA gangster summed up Martin saying: “Dean had the perfect make-up to be a racket guy but was a little too lackadaisical.” Actually, he was far too cool to break the law.

Posted by dino martin peters at 7:31 AM

What a great collection of Dino-knowledge!

There is going to be an avalanche of Dino tributes and articles coming our way! Thanks to Mr. DMP we can rest assured that most if not all will be caught and displayed as professional as usual!

Francis Albert also had an English complex. He studied the dictionary and learned to articulate the best he can. Not unusual for first generation of first migrant families.
That and the fact the Dino was more of an introvert, than shy I believe, he came off as recluse and not 'confident' as normally assumed.

Love the easy the gangster at the end of the article sums up our pal..."Dean had the perfect makeup to be a racket guy but was a little too lackadaisical." Haha! That's our Dino!

Hey pallie, likes Eddie-o, great Dino-insights our Dino-bro, and yes we need to prepare ourselves for a fabulous feast of huge homages to our one and only Dino! Keeps lovin' 'n sharin' our most most beloved Dino!

Hey pallie, likes Danny-o, this particular Dino-devotion has a number of remarkable references to our great great man...thanks for sharin' the one that deeply moved you! Keeps lovin' 'n sharin' our most most beloved Dino!

Trust the UK writers to pay due homage to our Dino.

I'm so excited for Wednesday! I'll make my profile pic Dean Martin on that day and post some things about him. I can't wait!